Well, it was good while it lasted. Okay, it was acceptable while it lasted. The Walking Dead: World Beyond managed to deliver a surprisingly satisfactory, if not outstanding first half to its two-episode season finale storyline during this week’s previous hour, but alas, it wasn’t meant to be. The first season’s proper finale, “In This Life” ends up fumbling the ball again, and delivering an infuriatingly unsatisfying conclusion to what’s already a very disappointing first season for AMC’s latest The Walking Dead spin-off. It lacks meaningful obstacles, believable storytelling, and, most surprising of all, any fatalities whatsoever.

Even the very story progression of this episode feels like it’s barely worth mentioning. It’s all just a forced excuse to move characters into certain places before The Walking Dead: World Beyond’s second and final season begins airing. Even the confrontation between Hope and Huck ends up barely registering, as does the pursuit after them by Iris and Felix. Some exciting moments do manage to sneak in during this core storytelling, but once again, it’s not enough to elevate a season that’s quite clearly given up at this point. That’s a real shame, because this season really could have turned the corner with at least a solid conclusion this week, but we didn’t even get that in the end.

So, inevitably, Hope eventually corners Huck, demanding to know who she actually is, and confirming that she knows Huck is a CRM mole. This puts Hope in the process of making a very important decision regarding Huck’s fate, though this is eventually interrupted by a convenient walker attack. Hope does at least see that Huck is unwilling to hurt her at this point, but even then, Hope subsequently being won over, or at least appearing to be won over, by Huck’s pro-CRM grandstanding, feels far too easy, even considering how long it appears to take! There is a chance that this is a deliberate ploy, especially considering an important scene between Hope and Iris later in this episode, but it’s still one of several examples of this episode dragging its feet to force a questionable story turn that never feels like it organically comes together, and wastes a bunch of time in the process!

Further dragging out Huck completing her mission to retrieve Hope for the CRM is Iris and Felix eventually catching up to them, despite the fact that Hope and Huck actively try to remain hidden from them. Why this stealth effort suddenly doesn’t work, I’m not sure, but regardless, it eventually leads into Felix also holding Huck at gunpoint, demanding to know her true mission. What results from this is admittedly a pretty awesome hand-to-hand fight scene between Huck and Felix, as a dropped lantern burns the abandoned house that they’re hiding out in. Hope holding a gun to her head and demanding that the fight stop, mere seconds before Huck stabs Felix to death, is also a surprisingly awesome turn! Again though, this prevents meaningful consequences from being gleaned from Huck’s deception, especially when Huck simply delivers Hope to Elizabeth, on schedule. Well then what’s the point of Iris and Felix catching up to them at all then? Even the reveal that Huck staged the distress messages from Leo rings hollow, because, yet again, this is something that any viewer could figure out within this episode at least.

This is because we see several scenes of Leo having a romantic dinner with Lyla Belshaw, the CRM scientist who’s been the subject of some post-credits scenes during this season. We already know that Lyla is trying to help develop a cure for the Walker Virus at the CRM facility, but Lyla quite clearly enjoying a romantic relationship with Leo prematurely proves that Leo was never in danger, making the twist with Huck forging his messages pretty much ruined in advance. Worse still is that this early peek at Leo and Lyla being in a relationship amounts to nothing so far. All it does is feature Lyla wanting to confess to Leo that Hope is coming to the CRM facility, and then she just… Doesn’t. It’s just more filler in a season that’s already full of too much filler, right up to its equally lacklustre conclusion!

The lingering subplot with Elton and Percy doesn’t fare much better either. This now involves the two miraculously stumbling upon Silas in a bout of enormously contrived luck, at which point Percy can conveniently confirm that Huck was the one that killed Tony and shot him, cementing Silas’ innocence. This is another fact that we already knew though, once again making its emotional impact fall flat. Even the big twist in this subplot feels like a waste in fact, after CRM soldiers pursue signs that Silas has been hiding out in a building. Silas decides to sacrifice himself, and feign Percy’s blood trail, so that Elton and Percy can escape. Uhh… Why? Why is Silas the one making this sacrifice? It’s portrayed as if it’s hugely significant for Silas’ character, but it really isn’t. Instead, this comes off as yet another forced excuse to send three characters to where they need to be for Season Two, with Silas ultimately getting captured for no reason, and Elton becoming the ally of an unrealistically thriving Percy, who’s suddenly barely bothered by the fact that he’s been shot. Again, if Percy suddenly dies, and turns, Elton is screwed. How is this in any way a good plan?! 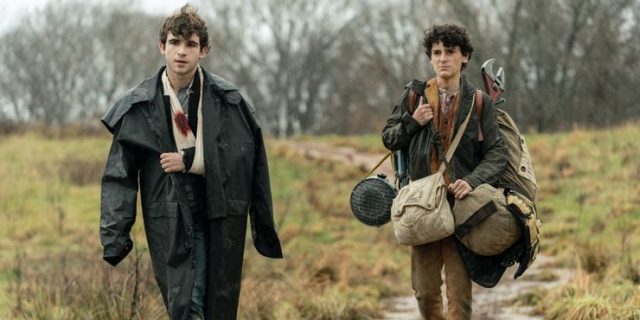 In the end, Iris and Hope secretly make a pact to bring down the CRM before Hope is taken away by Elizabeth, which will no doubt be the basis of Season Two’s storytelling. It will also likely be unsuccessful, since we already know that AMC has big plans for the Civic Republic throughout their upcoming Walking Dead projects. Thus, the main function of, “In This Life” is to catch the characters up on developments that viewers already know, while placing everyone in their proper places for Season Two, regardless of how little sense it makes. Felix manages to reunite with Will in the final moments of this episode most notably, but even this heartwarming moment only goes so far, because viewers will likely be checked out at this point. At least Iris and Felix have another ally now though, while Elton and Percy are inexplicably down a man, because Silas has to force an excuse to end up in CRM custody. We don’t even get to see nor hear Elizabeth or Will properly reveal that Campus Colony has been destroyed in the end, or even worse, why it was so necessary in the first place! This callous, glossed over detail especially is the final insult in a frustratingly sub-par first season for this ‘limited series’. I shouldn’t really be surprised that The Walking Dead: World Beyond yet again dropped the ball though.

Maybe Season Two will be different. I hope it is. After all, I would hate if this entire series ended up being a gigantic waste of time that only exists to needlessly prolong a dying TV franchise!