It would appear that The Walking Dead: World Beyond has become eager to get its sub-par debut season over with. The season’s last two episodes have been pasted together for the final Sunday of November this week, beginning with Season One’s penultimate episode, “The Deepest Cut”, in Fear the Walking Dead’s previous 9:00 PM timeslot. Considering all of the missteps that this show has made since it started last month, there is at least an opportunity here for AMC’s ill-fated ‘limited series’ spin-off to stick the landing at its overall halfway point, before its second and final season comes along at some point in the future.

On the positive side, “The Deepest Cut” does manage to kick the storytelling into a higher gear as well, before it leads into this season’s proper final episode during the following hour. It’s not enough to eliminate The Walking Dead: World Beyond’s deeply ingrained problems, like its meandering pacing and highly contrived writing, but at least this episode is a little more engaging than most of Season One to date. This also effectively plays off of last week’s reveal that Huck is a mole within the group, and is actually the undercover daughter of Elizabeth Kublek, the leader of the ultra-powerful Civic Republic Military that oversaw the destruction of Campus Colony at the start of this series. 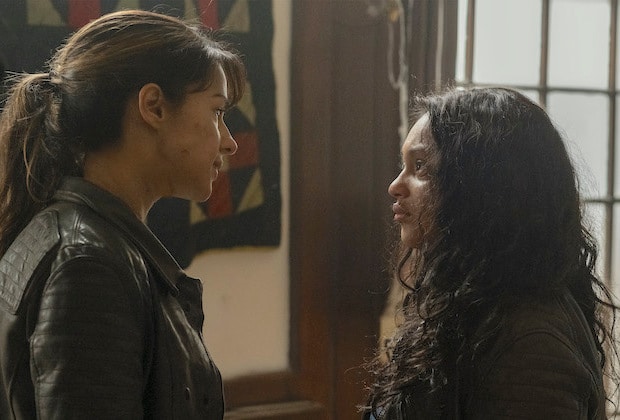 With Huck’s true allegiance now revealed to viewers, this episode can thus kick off with a cold open showing Huck getting briefed on her next steps by Elizabeth. This is done with an impressive degree of sabotage to boot, with Huck deliberately crashing the truck while everyone else is asleep, eventually rendering it seemingly unusable, before a group of walkers attack. These walkers conveniently provide an opportunity for Huck to injure Felix with her bladed staff as well, which Felix, along with the Bennett sisters, believe is from a nearby barbed wire fence. Huck using her knowledge of Felix against him to render him incapacitated, and force him to deliberate staying behind so that the mission to Ithaca can continue, is actually pretty inspired. She’s found a way to separate her ‘asset’ from Felix, without having to actually kill him, despite her mission declaring that everyone outside of the all-important Bennett sister is expendable.

Speaking of Felix, he served as the focus of more flashbacks in this episode, which finally introduce us to Felix’s mysterious boyfriend, Will. We see how Will and Felix met, ironically as co-interrogators for Huck after she’s first discovered, and how their relationship blossoms while Felix is living with the Bennett’s. This of course eventually culminates in Will taking Felix’s place on Leo’s security team, shortly before he travels to the CRM lab in New York State, leaving Felix to watch over Iris and Hope. This is well and good, and it’s nice to finally see Will at last, but it’s also disappointing that these flashbacks don’t ultimately tell us anything we didn’t already know, or couldn’t already piece together. There was a missed opportunity here to add more dimensions to Felix’s and Will’s relationship, and sadly, recounting how they met and subsequently separated isn’t really rewarding enough on its own. 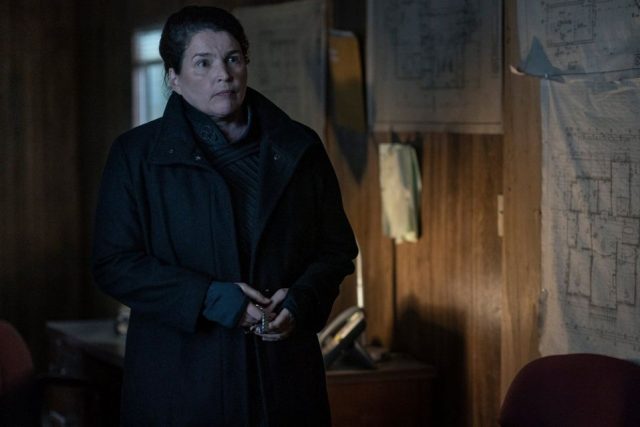 The Walking Dead: World Beyond wasting time in general remains a problem here, like I said. While this episode is better than most of Season One’s other offerings, it still spends most of its core story arc with the main group bumbling around and accomplishing nothing, beyond dry supply gathering and idle chatter that contributes nothing meaningful to the narrative. It’s not until towards the end of this episode that the storytelling finally goes somewhere more interesting, after Huck convinces Felix to stay behind in an abandoned church house, and Iris refuses to leave his side. Iris and Hope then get into a disagreement after Iris comments that Huck has been acting very shifty lately (this is a bit out-of-nowhere, even if Iris does happen to be correct), eventually leading to Hope talking Huck into leaving Felix and Iris early. Shortly beforehand however, Hope decoded Huck’s coded message from the CRM, and stole Felix’s gun, meaning that she knows Huck is a traitor. At the very least, how Hope plans to leverage this information should make for a compelling hook in the following episode, especially now that it’s apparent that Hope, not Iris, is the ‘asset’ that Huck is after.

Finally, Elton anchors the subplot of this episode, having branched off from the main group to try and locate Silas. Silas is completely absent in this episode, but that’s alright, because, after chasing the pages of his mother’s book, which he angrily tears apart shortly beforehand, Elton encounters a critically injured Percy! Even if this is an interesting turn however, it is more than a little contrived. Indeed, Elton quite literally dragging an unconscious Percy around, with no true destination, feels especially dangerous and unbelievable. What’s Elton’s plan if Percy turns?! That being said though, Elton conversing with an imaginary Percy, through which he reconciles his insecurities and grief over Hope’s revelation surrounding his mother, makes for some surprisingly solid material. I just wish that it didn’t involve such a laughably unrealistic premise for Elton’s character, which only gets worse when Percy conveniently wakes up, and blabs to Elton that Huck was the one who shot him. Well, no shit! This was a weak payoff to Elton’s subplot, because, much like the flashbacks with Felix and Will, this isn’t telling us anything that we don’t already know!

As I’ve said in prior reviews for this season however, I will take small victories where I can get them. “The Deepest Cut” slightly bumps up the often lacklustre writing of The Walking Dead: World Beyond, and at least sets the show’s first season up for a fairly decent finish during the following hour. The Felix/Will flashbacks aren’t really worth it, and the subplot with Elton doesn’t make a lot of sense, but Hope putting herself in a position to neutralize Huck, however risky it may be, is pretty exciting. Likewise, Huck’s sabotage of Felix, and eventually Iris, proves to be surprisingly clever, especially within a show that’s too often proven it’s anything but clever. Things could still change during the following episode, but so far, I’m cautiously optimistic that The Walking Dead: World Beyond may be able to end its weak debut season on at least an okay note, hopefully with a much better Season Two to follow it after this year.