NOTE: Some spoilers from throughout the second season of, “The Mandalorian” are present in this review

Disney has had a very challenging year. Between widespread Disney Parks closures, heavy financial losses and having most of their anticipated big screen blockbusters delayed to 2021, all on account of the ongoing COVID-19 pandemic, the House of Mouse saw its company worth surpassed by rivals such as Netflix in 2020, temporarily disturbing their place as one of the world’s top entertainment giants. Among Disney’s many scuttled 2020 entertainment plans however, few platforms were hit as hard by the pandemic as Disney’s fledgling video streaming service, Disney+, which saw most of its biggest original series offerings delayed to 2021. Sure, this didn’t affect subscriber numbers in the end, with Disney+ still soaring well above Disney’s expectations in terms of membership sales throughout 2020 (almost 90 million subscribers and counting as of the end of this year!), but it did lead to the first year of Disney+ original content becoming much drier and less momentous than originally planned.

Thank God for The Mandalorian then, the original series that launched its first season alongside Disney+ itself last year, and managed to complete its second season on schedule, despite the production difficulties caused by the COVID-19 pandemic. This first-ever Star Wars live-action series became an instant hit last year, with its debut season driving the majority of early Disney+ subscriber numbers, and even securing quite a few Emmy nominations in the process! It’s not difficult to see why either. Not only is The Mandalorian the freshest, most interesting thing to happen to Star Wars in many years, leaving Disney’s highly-contested sequel movie trilogy in its dust, but it also raised the bar for production values in television to staggering new degrees, ultimately becoming indistinguishable from the Star Wars movies. 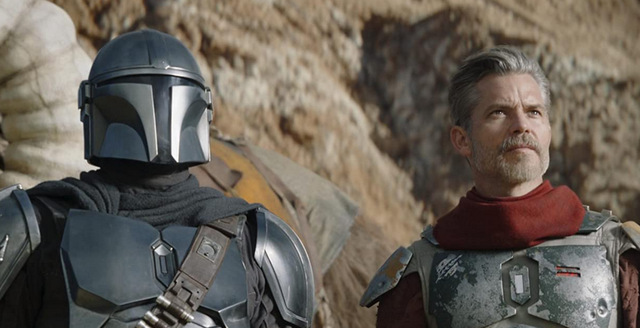 Despite how gorgeous and thrilling The Mandalorian is however, it’s the heartfelt journey of its lead characters that truly invests viewers in the show, a journey that reached some very exciting new heights in 2020. The second season of The Mandalorian expertly builds off the momentum of its predecessor, tying the series even deeper into Disney’s over-arching Star Wars canon, while laying the groundwork for a whole slew of future Star Wars projects on Disney+. The series’ production values only get better in Season Two as well, which delivers better action, more shocking twists, and a slow burn, but more consistent storytelling style that culminates with a truly heartbreaking, yet still oddly uplifting conclusion.

Granted, it’s established, highly devout Star Wars fans that will get the most out of The Mandalorian’s second season, especially now that it’s openly tying into side projects like Star Wars: The Clone Wars, Star Wars Rebels, and the various canonical novels and comic books that Disney has approved to be a part of the franchise’s continuity. If you’ve only seen the Star Wars movies, or perhaps not even all of them, it’s still not difficult to understand and appreciate the storytelling throughout The Mandalorian’s second season at least, especially when the show maintains a good commitment to being accessible to fans of all levels, and laser-focused on its character-based narrative. Despite that though, there are definitely lots of Easter eggs and references that will be lost on more casual Star Wars fans, and that’s before considering that some of the attempts to bait and pander to die-hard Star Wars enthusiasts can be a little hokey and eye-rolling at times.

Even though Season Two is ultimately superior to its predecessor however, it also takes a couple of episodes to truly hit its stride. The start of The Mandalorian’s sophomore season is disappointingly formulaic, as if it’s deliberately stalling before it’s able to truly start delivering its best Star Wars fan-baiting. Even after that, a couple more episodes feel like side quests to the main narrative, primarily interested in simply delivering more admittedly impressive action scenes, or setting the stage for several more Star Wars satellite shows that will hit Disney+ over the next couple of years. When The Mandalorian’s second season is hot though, it’s very hot, easily delivering some of the most compelling, flashy television that all of 2020 had to offer. Maybe that’s a low bar after the numerous TV delays and disruptions caused by the COVID-19 pandemic, but even if that wasn’t the case, The Mandalorian would still stand as one of the most cool and entertaining sci-fi shows on any TV platform at the moment.

Just as we finally unmasked the eponymous Mandalorian as Din Djarin, survivor of the Siege of Mandalore during The Mandalorian’s first season as well, Season Two finally revealed the mysterious background of The Child, or, “Baby Yoda”, as fans of the show have affectionately dubbed him. The mysterious youngling survivor of Yoda’s still-unknown, Force-sensitive species is eventually brought to Ahsoka Tano during Season Two, the now-adult former Jedi Padawan of the late Anakin Skywalker/Darth Vader, played excellently by Rosario Dawson in the character’s live-action debut (who will reprise the role in upcoming Disney+ spin-off series, Ahsoka), who finally reveals The Child’s real name; Grogu. Grogu, being alive for over fifty years at this point (remember that Yoda’s enigmatic species ages very slowly), was naturally part of the Jedi students that were being trained during the Clone Wars, and thanks to some lucky breaks, he managed to survive the Jedi massacre of Order 66. So, he’s not a clone, he’s not some child of destiny, and he doesn’t appear to be an actual relative of Yoda. Like Djarin, Grogu is simply a survivor of an old war, merely trying to make his way in a world he no longer understands.

These revelations helped to bolster and solidify the surrogate father/son bond that’s been built between Djarin and Grogu throughout The Mandalorian’s entire run so far. This in turn led to a climax with just as much drama as it had excitement, after Grogu’s attempt to contact a Jedi ends up getting him captured by the show’s returning Imperial arch-villain, Moff Gideon. Gideon, along with his Dark Troopers (an old foe from the 1990’s-era video game, Star Wars: Dark Forces that’s been placed into Disney’s revised Star Wars canon for the first time here), very nearly prevails against even an entire platoon of allies for Djarin as well, until they’re just barely bailed out by none other than Luke Skywalker! Mark Hamill reprising the iconic Star Wars role he formerly claimed to be done with, de-aged and voice-altered to resemble his Original Trilogy-era self with some remarkably impressive CGI, made for a truly gratifying conclusion to the season, while also giving Grogu a fulfilling exit, having contacted Luke through The Force via a Seeing Stone shortly before his capture. The subsequent tear-jerking farewell between Djarin and Grogu thus officially concludes the first era of storytelling for The Mandalorian on a flawless note, as both characters find themselves headed to different destinies in the years ahead.

Luke wasn’t the only fan-favourite Original Trilogy character to return during this season of The Mandalorian either. After an early tease from last season, none other than Boba Fett made his way to this show’s ensemble around the season’s halfway mark, with Temuera Morrison portraying the character, previously revealed to be a clone of Morrison’s Star Wars: Attack of the Clones character, Jango Fett. Boba was not only used to bail Djarin out of more than a few jams (including the untimely destruction of Djarin’s ship, the Razor Crest!), but was also a welcome method to bring back Ming-na Wen’s Fennec Shand for this season, now re-framed as an ally to Djarin. Wen is also effectively poised to reprise the role of Fennec again in Boba’s own upcoming Disney+ spin-off series, The Book of Boba Fett, serving as the foundation of another strong anti-hero partnership to follow the painful parting of Djarin and Grogu. 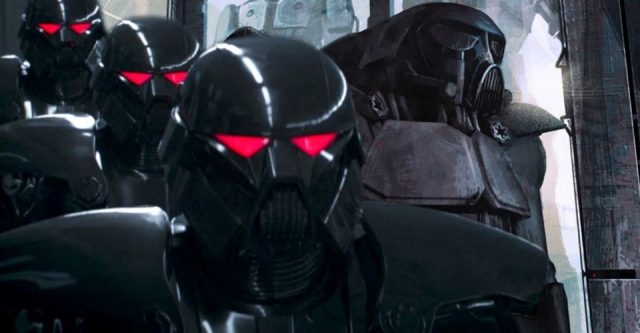 On this note, a particular strength behind The Mandalorian’s sophomore season is how effectively it reinterprets characters we formerly thought we knew. While you could practically play a drinking game to the amount of contrived betrayals and double-crosses that Djarin suffers this season, this is thankfully complemented by old enemies becoming new friends, often in legitimately clever ways. Fennec is an obvious example of this inspired character development, but the real highlight on this note is Bill Burr’s Migs Mayfeld, who returns for Season Two’s penultimate episode. Forced into another heist, this time at Djarin’s mercy, an otherwise slower episode is thus used to show a whole new side of Mayfeld’s character, who is now framed as much more sympathetic, and another victim of the Empire in his own way. Fans of the Star Wars cartoons will also recognize Katee Sackhoff’s Bo-Katan Kryze, with Sackhoff continuing the role in live-action for The Mandalorian. Bo-Katan becomes an ally and an unexpected obstacle to Djarin in equal measure during Season Two, and she even appears to serve as the basis for this show’s revised storytelling direction in Season Three next year.

I said it in my review of this season’s finale, and I’ll say it again here; I can’t recall a prior time when we had this many exciting Star Wars projects to look forward to. The Mandalorian continues to cement Disney+ as the ideal home for Star Wars content throughout its second season, finely balancing self-contained narratives with tons of exciting teases and tie-ins to the various other arms of Disney’s Star Wars canon. There are still a few slow spots where the series falls back on an overly familiar formula in Season Two, especially when every episode has to invent new excuses for Djarin to get into spectacular battles with all manner of Outer Rim scum, but the storytelling nonetheless feels more refined and more rewarding throughout The Mandalorian’s second batch of episodes. This is especially true for hardcore Star Wars fans, who will spot lots of cool story callbacks alongside foreshadowing for future Star Wars plotlines, though this season’s sharp storytelling never goes so far as to alienate non-fans or casual fans that aren’t exceptionally versed in the increasingly complex lore of the Star Wars universe.

It’s official; The Mandalorian is no fluke. This series is doing what Disney’s Star Wars sequel trilogy never could; Making Star Wars feel exciting and relevant again, while also taking the canon in a rewarding new direction that only builds momentum with every offering. It was a hell of a road to get there, but finally, Disney is doing right by Star Wars, and for the first time since I was a young boy that had just heard about Star Wars: The Phantom Menace in the 90’s, I’m genuinely excited for this franchise’s future!