2020 was a dry year for the Marvel Cinematic Universe. In the fallout of the ongoing COVID-19 pandemic, the MCU ultimately featured no new movies last year, and its since-shuttered Marvel Television arm merely delivered the one-and-done season of horror series, Helstrom on Hulu (which still hasn’t yet been released anywhere outside of the U.S.), along with the seventh and final season of Agents of S.H.I.E.L.D. on ABC. 2021 is wasting no time making up for that sluggish year for Marvel’s live-action content though, beginning with an all-new addition to the MCU as early as this January, which also marks the beginning of a highly ambitious new initiative of original MCU television shows made for Disney+.

This addition is, of course, WandaVision, one of two Disney+ original shows from the newly-unified Marvel Studios that were originally planned to be added to the MCU library last year (the other being this March’s upcoming The Falcon and The Winter Soldier), before the COVID-19 pandemic bumped them into 2021. WandaVision immediately promises a radically altered storytelling style for the MCU as well, presenting itself across nine half-hour episodes that aim to pay homage to classic TV sitcoms, while still laying the groundwork for an all-new, pivotal mystery in the MCU at large. It’s a very ambitious and creative idea, one that continues to have the MCU charting bold, all-new courses in its narrative, even following over a decade’s worth of content, and counting. 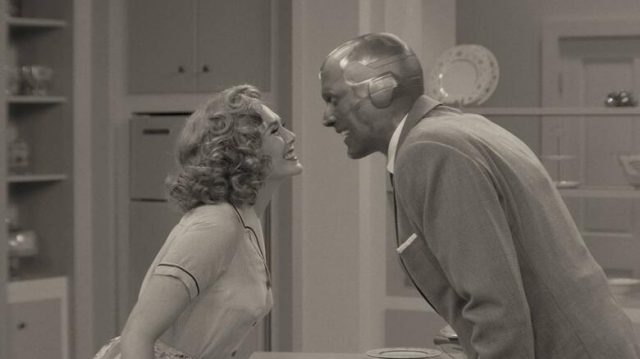 That’s all well and good on paper, but it doesn’t mean much if the idea behind WandaVision isn’t appealing in execution. Fear not however, because WandaVision is a quirky, surprisingly funny delight right out of the gate. The innate characteristics of both Wanda Maximoff/Scarlet Witch and Vision, who are presented as a 1950’s-style married couple here, are smartly leveraged to create uniquely witty, wholesome comedy. This series premiere goes all in on the 1950’s sitcom theme as well, featuring a ‘live’ commercial break about a fictional new toaster halfway through, and even presenting the entirety of this episode’s main events in classic 4:3 aspect ratio, along with completely monochrome visuals. This is certainly an odd clash when you watch the show on a modern 4K/HDR display, which WandaVision is proudly optimized for, despite its intentionally vintage look.

The only potential gripe in this first episode that stands out to any real degree, and it’s ultimately a pretty minor one, is the fact that the storytelling is very shallow and predictable so far. This is no doubt intentional, calling back to the inoffensive, delightfully weird family sitcoms of the 1950’s, but if you were hoping to get any more insight into what makes Wanda and Vision tick as a couple, you don’t really get that here. It’s made clear early on that their world doesn’t make sense, and because of that, none of their character development feels like it matters, at least not yet. The ending stinger does make clear that Wanda and Vision have apparently been trapped in some kind of retro TV world by a mysterious party however, so I imagine that more memorable character moments for both of them will probably come along later in the series.

Regardless, this first episode of WandaVision builds itself around an appropriately zany, nostalgic TV conflict; Wanda and Vision can’t remember the significance of a date on the calendar, which they’ve marked with a heart. Wanda’s nosy neighbour, Agnes, played by a standout Kathryn Hahn, subsequently convinces Wanda that the mark must be for an anniversary, but, unbeknownst to Wanda, the date is actually meant to signify an abbreviation for dinner with Vision’s boss, Mr. Hart, and his wife. The comical misunderstandings that follow elicit surprisingly amusing humour as well (complete with a live studio audience providing a laugh track to complement them!), particularly in how they use Wanda’s character to call back to classic TV sitcoms like Bewitched and I Love Lucy. The Hart’s, played in another standout turn by Fred Melamed and Debra Jo Rupp, also feel yanked straight out of The Honeymooners, with Melamed’s Arthur Hart being an impatient, short-sighted and domineering boss figure that’s complemented to great effect by Rupp’s oblivious, ever-patient wife, who is never actually named in this episode, funny enough.

The jig is rumbled however when Arthur suddenly starts choking at an impromptu dinner that Wanda throws together, only for Mrs. Hart to perpetually smile and repeat herself n response, in an unnerving glitch of reality. Suddenly, Wanda and Vision being oblivious to mundane things like their anniversary, their wedding song and what Vision does at his job handling, “Computational forms”, takes on a sinister new tone. Like I said, it’s very clear that something is wrong with this world, and that someone has captured Wanda at least in a twisted reality that’s meant to pacify her desires to some degree. Wanda’s and Vision’s suspicion is ultimately allayed when they decide on a wedding song, an anniversary, and even conjure wedding rings for each other in the epilogue, but the final seconds of this episode nonetheless make clear that Wanda is not living in actual reality. What’s going on here?

Admittedly, despite the lack of depth in the narrative at this point, the over-arching mystery behind WandaVision is effortlessly compelling. Wanda is a character that’s often felt like she’s meant for bigger things than her former MCU roles, and WandaVision finally presents an opportunity to make that happen. This first of two series premiere episodes manages to excel at the comedy and the performances as well, creating an experimental new MCU expansion that succeeds at starting the MCU’s Disney+ line of shows off on a solid note, while also continuing to chart new storytelling frontiers for the MCU as a whole. Disney and Marvel Studios have both been a little vague as to whether WandaVision is still committing to its original pitch as a miniseries, or whether it could ultimately receive additional seasons (especially considering recent reports that this May’s Loki series has already been internally greenlit for a second season), but either way, I’m looking forward to further diving into this strange new tale in the weeks ahead, and hopefully seeing Wanda and Vision grow into the standout characters that they always deserved to be in the MCU.