WandaVision is offering two episodes for its series premiere this week, and the first has already proven to be an experimental, but enjoyable offering that takes the Marvel Cinematic Universe’s new Disney+ arm in an immediately bold, innovative direction. “Don’t Touch That Dial” follows that up by continuing on much the same note as the first episode of this miniseries (is it still a miniseries?), providing another new TV sitcom backdrop, this time inspired by the 1960’s era, amid more cracks around the fragile, but rapidly expanding illusion that currently appears to be enveloping Wanda.

“Don’t Touch That Dial” begins with a mysterious thud that awakens Wanda and Vision in the middle of the night. The two quickly determine that the sound is coming from some tree branches hitting the window, but the mystery nonetheless deepens after Wanda discovers a toy helicopter in her yard during the following morning. The intriguing part? The helicopter is in colour! Marvel fans however will notice an even more important detail on the little toy copter, and that’s the fact that it bears the insignia of S.W.O.R.D.! S.W.O.R.D., or the “Sentient Weapon Observation Response Division” (a slightly altered acronym from its Marvel Comics inspiration), is an offshoot of familiar Marvel spy agency, S.H.I.E.L.D., and its foreshadowing marks the first time that a Marvel faction with its film rights formerly owned by Fox has officially made its way to the MCU. In Marvel Comics, S.W.O.R.D. is charged with assessing and forming responses to potential and active alien threats, but in the MCU, it appears that the organization is more earthbound, at least for now, instead being dedicated to handling especially powerful ‘Enhanced’ like Wanda.

Again though, this over-arching mystery is temporarily shaken off via two other sitcom-style conflicts, one for Wanda, and one for Vision. Wanda wants to impress the neighbourhood’s demanding queen bee, Dottie Jones, who has all of the domestic connections she could ever dream of, while Vision tries to amp up the neighbourhood watch after reports of hooligans in the area. The two story arcs ultimately come together at a charity-themed talent show, where Wanda and Vision try to perform a magician-themed double act in order to convince the community that they’re completely normal, non-powered citizens. Things naturally get amusingly complicated after Vision tries to blend in by chewing gum though, only to inadvertently swallow it after someone slaps his back, which gums up his inner robotic workings, and essentially renders him a drunken, deranged mess.

The lead-up to the talent show itself is a little bland at times, especially when viewers are regularly being reminded that nothing Wanda is experiencing is actually real. Still, the increasing hints that Wanda’s powers may be out of control, and may be doing very real damage to the actual reality of the MCU, are laid out at a very engaging pace. Dottie briefly has flashes of colour on her face before temporarily being confused at Wanda’s identity during another likely contact attempt by S.W.O.R.D., for example, shortly after Wanda befriends another new neighbour named Geraldine that seems to have an equally mysterious background. Of course, if you’ve been keeping up with WandaVision’s marketing, you already know that Geraldine is actually Monica Rambeau, the daughter of Captain Marvel’s military buddy, Maria Rambeau, from the eponymous 2019 movie and period piece. Problem is, “Geraldine” doesn’t currently seem to be aware that she’s Monica Rambeau. 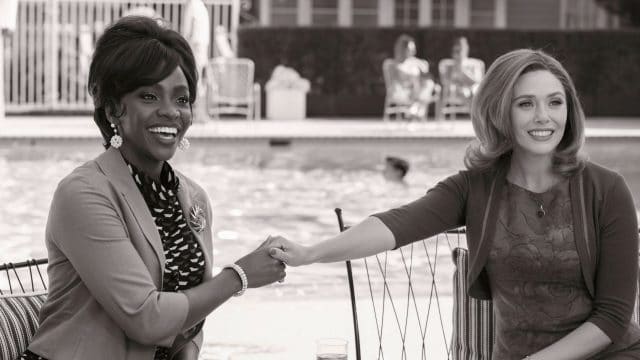 This is where it becomes clear that Wanda’s powers are likely spinning out of control in the MCU’s true reality, and could be being tapped into by some currently-unknown villain that wants to do some real metaphysical damage to the dimensional fabric of the MCU. It’s likely that Geraldine/Monica and Dottie are both S.W.O.R.D. agents that attempted to make contact with Wanda, only to become consumed by her illusion (Dottie was likely sent first, since Geraldine/Monica seems to still be semi-aware of the fake reality), and that S.W.O.R.D. is now trying to contact Wanda without sending in any more agents if they can help it. This is all speculation from me, of course, but there’s definitely something sinister afoot, and Kathryn Hahn’s Agnes is no doubt related. In fact, I wouldn’t be surprised at all if Agnes’ suspiciously unseen husband, Ralph is the mystery villain that’s exploiting Wanda’s increasingly unstable reality manipulation. Hell, Agnes herself could be the villain in question, and, “Ralph” could be a complete misdirect, who knows!

Regardless, this episode’s talent show climax is incredibly entertaining, and funny! A blatantly compromised Vision predictably fails to disguise his powers on stage, forcing Wanda to create comedic, on-the-fly explanations for Vision’s super-powered feats. It’s a fast-paced, hilarious set of gags that play wonderfully off of the lighter side of Wanda’s reality-manipulating powers. The two are even forced to temporarily drag Geraldine/Monica into the big climax of their ‘act’, inadvertently winning the favour of Dottie, which comes just in time for Wanda to discover that she’s pregnant… Just like that? Another great tease then ends this episode off the back of this sudden surprise, namely when Wanda hears another thud outside, and goes out to discover a mysterious figure in a beekeepers’ outfit. She then says, “No”, and rewinds reality to Vision asking her if things are really happening, which she affirms. The world then explodes into colour after a subsequent kiss with Vision, and while it looks nice at first glance, this is actually very bad news. This is the first concrete proof that Wanda herself is contributing to this false reality, knowingly and willingly, and it’s likely that Agnes in particular is meant to keep her focused on perpetuating this fake sitcom world, rather than returning to the MCU’s actual reality. 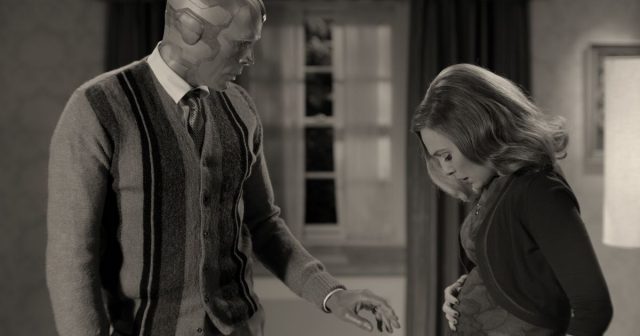 On that note, WandaVision is actually starting to remind me of another Marvel Comics-inspired show, FX’s Legion, a former spin-off from Fox’s now-concluded X-Men movie franchise. While WandaVision is definitely a friendlier, funnier and more family-safe take on the concept, it, like Legion, seems to be employing retro-style reality filtering as a way of representing the uniquely overcharged minds of Marvel Universe psychics. Also like Legion, it seems fairly apparent that Wanda is not the only force manipulating this false reality, and that she’s being helped along by a ‘parasite’ of sorts. I doubt that WandaVision will completely recycle the whole Shadow King hook from Legion, but it nonetheless seems obvious that someone or something is looking to piggyback off of Wanda’s predicament, likely using it to hitch a ride from some other dimension, specifically to the central dimension of the MCU. That’s bad, but Wanda actively rejecting true reality is even worse, positively affirming that this whole sitcom fantasy is going to get more engrossing before it starts inevitably dissolving.

There’s still a couple of slower spots here, and Wanda and Vision themselves remain frustratingly under-developed for now, but WandaVision nonetheless remains very engaging and entertaining in its second episode. “Don’t Touch That Dial” continues to push the show’s classic sitcom inspiration further, moving it up to the 1960’s (notice the subtle changes to the ‘set’ of Wanda’s and Vision’s house in Westview compared to WandaVision’s 1950’s-themed first episode), and as such, slowly embracing the idea of incorporating less conventional family values. This is also humourously exemplified by Vision discovering that the, “Neighbourhood watch” is actually just a group of male gossips, while Wanda genuinely has to take care of business by winning the approval of Dottie and her Stepford Wives-esque sidekicks. There’s definitely an impressive commitment to equal parts mystery, homage and absurdity in WandaVision, and even if the show does currently appear to be borrowing a few storytelling ideas from FX’s Legion, the impeccably charming execution still makes it feel like delightful refreshment after more than a whole year without new Marvel Studios content.

WandaVision Series Premiere Part 2: "Don't Touch That Dial" Review
WandaVision is still barely developing its eponymous characters to a meaningful degree in Episode 2, but it nonetheless continues to elevate its comedy while in turn strengthening its surreal mystery.
THE GOOD STUFF
THE NOT-SO-GOOD STUFF
2021-01-16
82%Overall Score
Reader Rating: (0 Votes)
0%