Pennyworth remains the odd outlier among DC’s current television slate. Not only is it the one mainline DC television series (i.e. excluding shows inspired by DC’s former Vertigo imprint, like Lucifer), that isn’t hosted on a WarnerMedia-owned platform right now, nor is it officially part of any other established live-action DC Universe (except possibly the Gotham universe, since the same showrunners produce Pennyworth), but its distribution model remains positively head-scratching. The show remains staggered by several weeks outside of its native U.S. (despite the fact that it’s openly masquerading as a British series), and even there, Pennyworth’s Season Two airing schedule has been stalled by several months, due to ongoing production complications caused by the COVID-19 pandemic. It’s ironic that TV’s other ongoing Batman Family-inspired drama series, Batwoman is also in a messy state for different reasons (even more so for us Canadians, since Batwoman and Pennyworth air within the same Sunday night programming block on Canada’s Showcase channel!), leaving the Batman Family’s small screen arm feeling strangely cursed at this point.

Regardless, Pennyworth’s second season premiere has finally sauntered its way onto television screens for us Canadians, a whole month after its sophomore season started, and subsequently stalled, in the U.S. “The Heavy Crown” has a lot of ground to make up as well, coming off of a rather shocking and uncertain ending to Pennyworth’s first season in 2019, which saw Alfred’s father take his own life in a suicide bombing, being revealed as an agent of the villainous Raven Society. A year has passed since those events, and this leaves Pennyworth’s second season to kick off with the Raven Society having conquered and taken most of England, in turn rebranding themselves as the, “Raven Union.” The Queen’s loyal forces, including the No Name League, are currently scattered and in hiding as well, with London serving as the last holdout to the ever-encroaching march of Lord Harwood’s army. 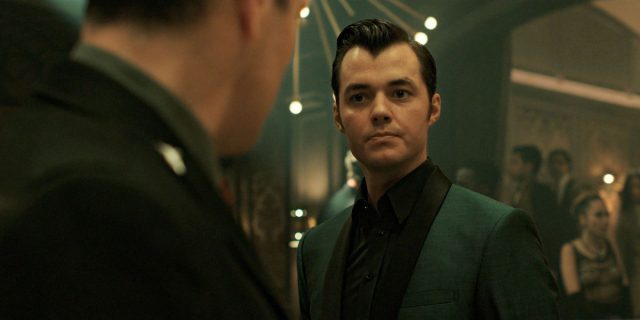 What’s Alfred going to do about this messy state of affairs? Well, as little as possible, surprisingly. Having given up on his country, which has been permanently tainted by the loss of both Esme and his father, Alfred has decided to flee to America, hoping to take his mourning mother with him in the process. This actually plays well off of viewers’ expectations with Alfred’s character, who inevitably does wind up settling in Gotham City at some point in the future, to serve as the surrogate father to the future Bruce Wayne/Batman. Before that though, Alfred still has unfinished business in London, which involves taking on dirty jobs to save as much money as possible, thus allowing him to start his new life in the U.S., and wash his hands of the whole Raven Society/Union affair.

The way that Pennyworth continues to embrace a darker, more morally ambiguous Alfred than Batman/DC fans would be used to continues to shine as well. By this point, a cynical, hardened Alfred has resorted to any kind of shady job to raise funds for his exodus from England, including kidnapping and assassination. Bazza and Dave Boy remain in Alfred’s loyal company as well, helping to take on an inciting incident that involves Detective Inspector Aziz pointing them towards a new Raven Union goon; Colonel John Salt, for a generous payout. Salt appears to be an unremarkable desk jockey at first glance, but is actually a key torturer and fixer for Harwood, and after Martha tortures some intel out of a captured Raven Union stooge herself, Alfred finds himself on Salt’s trail. 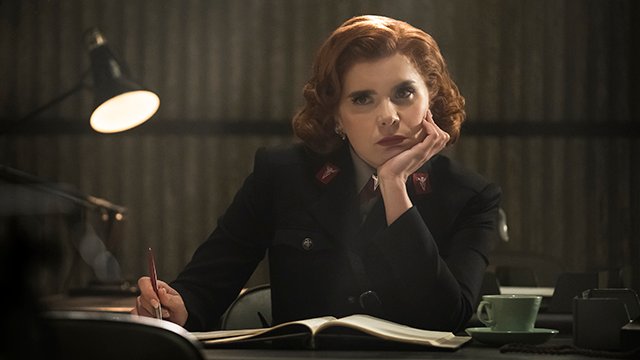 Salt overall seems like a promising new antagonist, presenting a solid first appearance that’s as brutal as it is darkly amusing. He’s outwardly mousey, but inwardly sadistic, leaning well into Pennyworth’s often pitch black sense of humour through his brutal methods of torturing and killing victims. Alfred, Bazza and Dave Boy nonetheless appear to capture Salt early on, while he’s enjoying a fun night with his mistress no less, and it’s here that Alfred really gets to stare into the abyss of what he’s become. Alfred even goes as far as to take Salt up on his payoff offer too, netting himself a cool 10,000 pounds to stage an escape for Salt, one that Aziz can’t ultimately prove Alfred has any relation to. This cold act does a very good job of further raising the stakes for Pennyworth, leveraging the unexpected way that last season ended to put Alfred in a losing battle that’s devoid of glory. Alfred won’t even take calls from his mistress, the Queen, in fact, which really goes to show how broken he’s become after the loss of his father!

Frustratingly though, Pennyworth still, with the start of its second season, continues to lack any meaningful connection to established Batman/DC lore. Thomas and Martha may still be a big part of this series alongside Alfred, but they unfortunately share the weakest storyline of the lot here. Thomas is forced back to England for the sake of the plot, more or less, subsequently dropping a bomb on Martha that he’s engaged to someone that he inevitably won’t end up with, because we know he eventually ends up with Martha. Likewise, Martha wants to fight the Raven Union, but has no real means to do so at this point, so who cares? The season premiere storyline surrounding these two just led to a bunch of arguing and circling debates that don’t matter, because we know that they’re doomed soulmates that will eventually sire Batman. Thus, it’s impossible to invest in the drama of Thomas being engaged, or Martha being unhappy about affairs in England, because even the most casual/uninitiated of Batman followers will know that none of this will matter in the end.

Bet, thankfully, continues to be a uniquely appealing bright spot in Pennyworth however, continuing to live out her days as an eccentric enforcer for Harwood and the Raven Union. Bet spends most of this episode disconnected from the main storytelling in London, instead being situated in Norwich to interrogate dissenters, and eventually finding herself before a lowly art student, Katie Browning. Bet winds up spiritedly challenged by Katie during a sinister, but surprisingly goofy interrogation bit, before Bet eventually appears to develop the same fascination with Katie that she seemed to harbour toward Esme last season. Whether through sheer exasperation or simply because of this twisted bond of perceived friendship, Bet eventually breaks from her Raven Union handlers towards the end of this episode, brutally crushing her superior’s skull with a teapot (never change, Bet!), and simply walking off with Katie. Where are they going? Why did Bet suddenly take Katie with her on a quest to who-knows-where? I can’t say, but I do know that Bet Sykes remains the shot in the arm that always keeps Pennyworth entertaining and unpredictable, even during its lesser episodes!

Overall, despite its ambitious evolution of the scenario surrounding Alfred and most of its other leads, Pennyworth still feels like it’s on much the same gear as it was during most of its first season. It’s a fairly engaging show with lots of appealing personalities, but it’s still not doing enough to meaningfully contribute to DC’s Batman Family mythology. It’s also still suffering from ineffectual Thomas/Martha drama that can’t effectively matter when we already know how their story is doomed to end. I will say, if you’re looking for a different spin on an established DC character, Pennyworth still manages to be that, even if the show nonetheless doesn’t seem to fit with DC’s mainline TV plans in any recognizable way. It’s fitting then that Season Two begins on the same odd, but strangely appealing note, continuing to provide, if nothing else, a darkly cheeky prequel saga about a major threat that Batman will never see, albeit one that Alfred currently has no interest in actually dealing with for now.

Pennyworth Season 2 Premiere: "The Heavy Crown" Review
Pennyworth makes a bold effort to elevate the battle against the newly-bolstered Raven Union in its Season Two premiere, but it's still faltering when it comes to effectively expanding the Batman Family lore.
THE GOOD STUFF
THE NOT-SO-GOOD STUFF
2021-01-18
78%Overall Score
Reader Rating: (0 Votes)
0%