After two weeks and three episodes’ worth of vintage sitcom-inspired weirdness, WandaVision is finally going to clarify just what the hell is going on in the Marvel Cinematic Universe’s highly eccentric kick-off to its Phase Four lineup. Well, to some extent anyway. This week, we get a break from the sitcom stylings within Westview, to instead focus on the growing presence surrounding Wanda’s mysterious altered reality, namely that of S.W.O.R.D., a covert government agency that’s becoming increasingly concerned with the activity surrounding this vanished town in New Jersey.

“We Interrupt This Program” thus puts the laughs aside for the most part, to instead go all in on explaining S.W.O.R.D., and how they fit into this whole mess with Wanda. This begins with a brief flashback to kick off this episode, taking place during the events of Avengers: Endgame, when Professor Hulk’s improvised Infinity Gauntlet was used to snap all of the ‘blipped’ life forms in the universe back into existence. As it turns out, Monica Rambeau was one of the billions of Earthlings that got snapped away by Thanos during the end of Avengers: Infinity War, and she happened to be in a hospital when this happened, at the bedside of her sick mother. Quickly adapting and trying to get information on where Maria Rambeau is, Monica is saddened to soon learn that Maria died off-screen of cancer, two years after The Decimation wiped out half of all life in the universe, with Monica being ‘vanished’ during the time of Maria’s passing.

As sad as it is that such a key character in 2019’s Captain Marvel movie has simply been killed off in the present-day MCU, Maria nonetheless has an important place in MCU canon; She apparently founded S.W.O.R.D. This makes a lot of sense, considering Maria’s 1990’s run-in with Captain Marvel, the Kree and the Skrulls, effectively tipping her off to aliens long before they appeared to become common knowledge among Earth’s citizens during 2012’s climactic Chitauri attack from The Avengers. This esteemed family legacy is small comfort to Monica however, who finds that her security access has been revoked, and that an old acquaintance, Tyler Hayward, now appears to be in charge of S.W.O.R.D., following Maria’s passing. At this point, it also appears that Nick Fury has no direct involvement with S.W.O.R.D. in the MCU either, though he could simply be in deep cover with the Skrulls, as alluded to during the events of Spider-Man: Far From Home’s post-credits scene.

As you can see, this is a very exposition-heavy episode, which some will appreciate, and some may find annoying, should they happen to especially like WandaVision’s sitcom-style charm. With an exclusive emphasis on S.W.O.R.D. this week, Kat Dennings and Randall Park, reprising their roles from the first two Thor movies and Ant-Man and the Wasp, respectively, are thus left to carry almost all of the comedy, which doesn’t land quite as efficiently as it does with Wanda and Vision in Westview proper. It is nice to see Darcy in particular still getting some bearing in the MCU though, especially after she was effectively written out of the Thor movies alongside Jane Foster with 2017’s Thor: Ragnarok, with Jane’s current fate still remaining unknown for now, and likely until 2022’s Thor: Love and Thunder.

For better or for worse however, there’s a lot to unpack this week. Fortunately, most of the exposition is at least fairly satisfying, after WandaVision has raised so many numerous questions about Wanda’s current state of affairs. In fact, it seems like barely any time has passed since the conclusion of Avengers: Endgame at this point, potentially placing WandaVision slightly before the events of Spider-Man: Far From Home in the MCU timeline. Regardless, Monica is grounded by Hayward, naturally, but is nonetheless put on a terrestrial case to investigate a missing person (this confirms that S.W.O.R.D. does indeed monitor alien threats in the MCU, a la Marvel Comics, but they also deal with unexplained phenomena on Earth, much like S.H.I.E.L.D. used to do), only to learn from Jimmy Woo that no one can remember the person, a lost FBI witness, as if they never existed at all. Clearly, there’s more to this story, because Jimmy still remembers the witness, and Monica didn’t lose the memory of her mission either.

Monica being sucked into Westview also happened completely by accident, which is what initially provokes a S.W.O.R.D. response, complete with S.W.O.R.D. hiring Darcy Lewis as a third party analyst. This eventually reveals that Darcy was the mysterious person watching Wanda and Vision during the final moments of WandaVision’s first episode, and that a combination of cosmic energy and broadcast signaling can allow S.W.O.R.D. to listen to and look in on Wanda’s false reality, which Darcy deduces. By doing this, they go on to identify that the Hart’s, Beverly, Norm, Herb and Dottie’s husband, Phil (though curiously, not Dottie herself, possibly lending credence to my theory that Dottie is another undercover S.W.O.R.D. agent), are all hostages that are trapped in Wanda’s sitcom reality, currently oblivious to their real-world identities. On top of that, the fake sitcom reality appears to automatically ‘correct’ any anachronistic technology that S.W.O.R.D. tries to use to directly investigate it, which explains the coloured toy helicopter that Wanda found in her garden during the second episode (which is a S.W.O.R.D. drone), and the mysterious beekeeper that came out of the sewer, who is actually another S.W.O.R.D. agent wearing a HAZMAT suit. 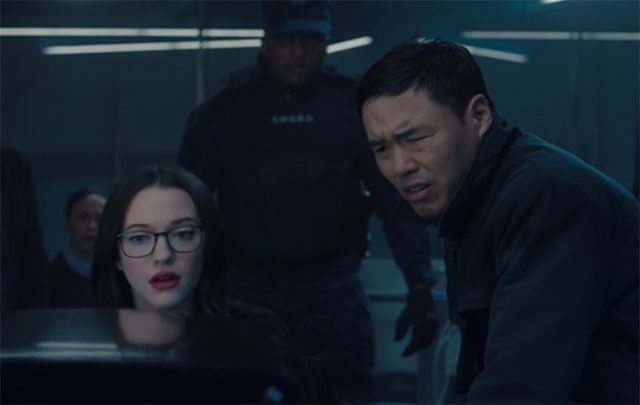 The end of this episode also cements another chilling fact that seems to be apparent; Wanda is completely responsible for this anomaly that’s currently separating Westview from the MCU’s true reality. This is confirmed directly by Monica, who now seems to be fully back to her senses, after appearing to be somewhat affected by Wanda’s sitcom world as ‘Geraldine’. Even then though, and as much as this will inevitably provoke a more aggressive response from S.W.O.R.D. in the weeks ahead, I have to wonder if there’s more to this story. Wanda seems legitimately confused and remorseful after ejecting Monica from Westview, using her powers to repair her damaged bookshelf before Vision comes home, at which point Wanda briefly sees Vision as he died, before he appears normal again. This would appear to indicate that Vision hasn’t simply returned to life, and that he may either be an illusion, or potentially a displaced, incorporeal entity that’s still linked to Wanda in some form, via the Mind Stone. That’s a much wilder theory than Vision simply being conjured from Wanda’s likely grief-fueled mental breakdown, but both Wanda and Vision do have a definitive link to the Mind Stone that can’t be ignored, especially since this potentially leaves both of them open to being exploited by a psychic being.

There’s obviously lots to mull over after this episode, but I do have to say that it’s a relief to get at least some definitive answers behind what exactly is occurring in Westview, and how S.W.O.R.D. is currently attempting to respond to it. “We Interrupt This Program” will nonetheless be an episode of mixed opinions though, depending on whether you’re coming to WandaVision for its comedy, its mystery, or both. If you’re growing impatient and desperate for explanations, then this episode will help to put you a lot more at ease, but if you’re all in on WandaVision’s sitcom hook, it can be frustrating that the show’s sense of humour is almost completely jettisoned this week. There’s definitely a bit of tonal whiplash that comes with a full WandaVision episode that suddenly goes back to the MCU’s true reality, and doesn’t directly expand on events in Wanda’s false reality, but even if we unfortunately have to wait an extra week before WandaVision inevitably moves to the 80’s, I did nonetheless enjoy getting an alternate perspective on the weird mystery of Wanda’s post-Thanos dealings.

WandaVision Episode 4: "We Interrupt This Program" Review
WandaVision takes a break from its sitcom stylings to flesh out the role of S.W.O.R.D. this week, providing more intriguing insight at the expense of the humour.
THE GOOD STUFF
THE NOT-SO-GOOD STUFF
2021-01-29
81%Overall Score
Reader Rating: (0 Votes)
0%