Finally, Black Lightning can move on to a different story pod this week, and finally, we can move on from the same tired Pierce family drama… Or, at least, we should be doing that. “The Book of Ruin: Chapter One: Picking Up the Pieces” does at least seem to be determined to move Black Lightning in a mercifully different story direction for the Pierce’s, but even then, it can’t completely escape the same tired hero arcs. It still feels like the showrunners just have no good ideas for the Pierce family at this point, and that issue is further exacerbated by the sudden departure of China Anne McClain from the role of Jennifer, which she announced on Instagram last November. This was also, not so coincidentally, the point when The CW confirmed Black Lightning as a whole would be coming to an end with its ongoing fourth season.

McClain’s departure marks a big switch for a DC series that’s already rapidly approaching its final bow. Rest assured however that the showrunners have found a rather creative solution to McClain’s exit. This naturally comes through the fallout of Jennifer flying into the Ionosphere, and exploding into displaced energy particles. Fortunately, after Gambi points Jefferson to none other than Central City and S.T.A.R. Labs, giving Black Lightning another welcome chance to acknowledge that it’s now part of the Arrowverse (disappointingly though, The Flash runs Jefferson’s lab equipment to him off-screen), the Pierce family gets a chance at reconstructing Jennifer’s energy, after Jefferson sets out to capture it from the Ionosphere. 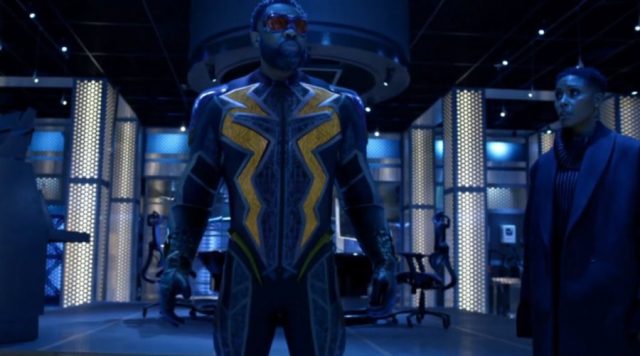 The quest to piece Jennifer back together has some undeniably cool moments, particularly when Jefferson quite literally cheats death to rescue his daughter. Despite that however, Black Lightning is clearly straining to write around losing one of its lead actresses, which continues to leave the Pierce family stuck in a circular dramatic quagmire, even with the start of a new story pod. Even Gambi is simply stuck listening to the heroes’ whining this week, frustratingly cutting him off from the much better story developments currently unfolding with Monavista International. So, yet again, Black Lightning is stuck in the same tired dramatic gear, with everyone moping around, and failing to accomplish anything, while the show’s villains continue to occupy the most interesting narrative material.

At the very least though, Jefferson has finally gotten over himself enough to suit up as Black Lightning again. He still wastes too much time arguing with Lynn beforehand, but at least these two make an effort to reconcile and start acting like a family again, in the fallout of Jennifer’s disappearance. Anissa and Grace however, Anissa especially, are still acting like children, and terrible spouses overall, pushing more pointless drama that ultimately goes nowhere. Even Lopez officially appointing Detective Shakur to Freeland’s anti-metahuman task force lands with a thud, because Lopez has done virtually nothing but whine about metahumans in Freeland so far, without actually doing much to properly fight them. So much of Black Lightning continues to spin its wheels with the start of the ‘Book of Ruin’ pod, and that’s becoming increasingly more difficult to abide as the weeks go on. This show really needs to find a better, more believable path for almost all of its lead heroes, especially since it’s running out of time to properly position the Black Lightning family of characters for their post-series futures in the Arrowverse.

Next week should certainly be interesting though, since the effort to reconstruct Jennifer comes with some shocking consequences. Jennifer is successfully pieced back together during the final seconds of this episode, but she nonetheless looks entirely different, from her hair to her face to her body! This appears to be how Black Lightning is getting around losing China Anne McClain; Writing in an excuse to simply recast Jennifer. It appears that, for the remainder of this series’ run, and possibly any potential future appearances for Jennifer in the Arrowverse, the role of Jefferson’s youngest daughter is now going to be played by newcomer, Laura Kariuki. That’s certainly an interesting way to justify a major role change during Black Lightning’s final season, but it’s nonetheless annoying that we had to spend yet another episode with the heroes simply sitting with their thumbs up their asses, and whining about a problem that wasn’t really a problem for very long.

As I’ve mentioned repeatedly, Black Lightning is entirely being held up by its villains at this point, and that yet again remains true with the start of the ‘Book of Ruin’ story pod. In fact, after they’ve sat out the past couple of episodes, the Kobra Cartel finally made a big move against Lala this week, and one that played well off of Lopez’s supposed crackdown on Freeland’s metahumans. After Destiny calls Lala to the site of a supposed truce, she sics a police trap on The 100, resulting in the arrest of nearly all of its key members, including Lala’s right-hand man, Devonte. Lala gets away however, leading to Destiny seemingly calling Lady Eve to request a metahuman assassin. It looks as if the Kobra Cartel are about to gain a decisive advantage over The 100, especially now that The 100 can’t rely on Tobias, who sadly also doesn’t do much this week, beyond casually revealing that his own right-hand man, Red is an undercover metahuman.

So, we had to spend most of this week’s episode simply justifying China Anne McClain’s exit from Black Lightning, which continues to leave its heroes either throwing tantrums, or listlessly bumbling around without any real direction. “The Book of Ruin: Chapter One: Picking Up the Pieces” thus fails to set the series on an interesting new creative path for the most part, even if Jennifer’s recasting will hopefully shake things up a bit more next week. Destiny’s big move against Lala and The 100 at least serves as an easy episode highlight though, despite Chief Lopez still failing to gain any serious ground in the supposed battle against Freeland’s super-powered populace. Not even Tobias could find anything interesting to do this week to boot, which signals more than ever that Black Lightning is starting to sink into a creative rut. That’s really not good for a show that’s now in its final season, especially when that show is part of a shared universe that needs to be given motivation to revisit its arm of the world in future projects.

Black Lightning 4.5: "The Book of Ruin: Chapter One: Picking Up the Pieces" Review
Black Lightning wastes almost an entire episode on having to recast Jennifer this week, as not even a new story pod can pull the Pierce's out of their mopey rut.
THE GOOD STUFF
THE NOT-SO-GOOD STUFF
2021-03-09
67%Overall Score
Reader Rating: (0 Votes)
0%