The title of this week’s Batwoman episode is just so sickly fitting. I don’t know what the hell the series is thinking lately, but it honestly feels like Batwoman has grabbed a shovel, and is starting to race to the bottom. Even after taking last week off, the series only got worse with, “It’s Best to Stop Digging” this week, which pretty much cements a new low for the already sub-par Season Two. Despite some decent ideas explored with the Crows, and one idea that almost works with Ryan herself, Batwoman is drowning in its own awfulness at this point. The narrative needs a serious overhaul, ASAP, especially since the material surrounding Coryana is rapidly becoming an Achilles’ Heel in a show that’s already full of outright bad character arcs throughout this season’s run so far!

A big reason why this episode of Batwoman is particularly infuriating is because it takes a monumental misstep with Alice’s character, one that almost irrevocably ruins her in one fell swoop! Considering that Alice is one of the only appealing characters on Batwoman at this point, that’s a serious mistake to make! Alice’s subplot could have gone any number of ways, especially when she successfully captures Tatiana, and forces her to spill the details of Alice’s erased memories on Coryana. Unsurprisingly, Alice and Ocean were lovers while they were on Safiyah’s exotic island, but an added twist is revealed here, namely that Safiyah also fell in love with Alice.

That by itself is not really an offensive turn, granted. I would argue it’s not necessary, but I wouldn’t go as far as to say Safiyah falling for Alice is terrible. What’s terrible however is Safiyah’s reaction to Alice and Ocean starting their own love affair, which just so happens to be timed with Ocean wanting to sneak the Desert Rose off of Coryana, of his own accord. Safiyah reacts to this news so badly in fact that she calls a hypnotist named Enigma (who may or may not be the Teen Titans-affiliated character of the same name from DC Comics lore?), to effectively warp Alice’s mind, and trap her in her own obsession with revenge on her family, and revenge on Gotham City. Yes, Safiyah created the Alice that we all know and love, and this is a fatal misstep for one of Batwoman’s best personalities!

You see, in making Safiyah and her bullshit mind magic entirely responsible for Alice’s villain origin, to the point where it practically retcons any of the Cartwright family’s influence out of Alice’s backstory, it completely murders any nuance, depth or interpretation behind Alice’s character and motivations! Now, Alice is simply a victim, twice over, which turns her rich, engaging villain arc into an insultingly simple one. This also has the unintended side effect of not only making Safiyah, who’s supposed to be a powerful, imposing character, into a lovesick fool, which is not exactly a great look for a major antagonist, but it also virtually cements her as a villain in her own right, which is not true to her character’s heritage in DC history! This is a universally terrible decision for Batwoman’s over-arching narrative, and one that’s now going to keep dragging down at least the rest of this season for the foreseeable future! Seriously, what the actual hell were the writers thinking with this asinine story twist?! 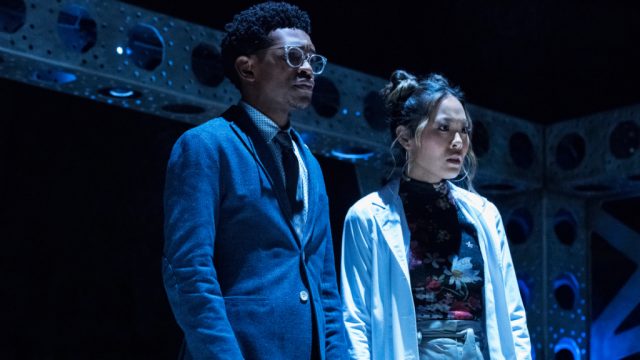 Speaking of asinine twists, Ryan also fumbled her way through a story arc that was almost entirely pointless this week, again, wasting incredible amounts of time before finally putting Team Batwoman into a position where they can move forward in the storytelling. At this point, Ryan’s Kryptonite sickness is so advanced that she’s practically unable to function. Oh, but she still goes out and tries to hunt down Alice whenever the plot says so, despite the fact that she’s literally dying! Not only does this make the Kryptonite sickness not feel like a pressing threat to Ryan’s life, but it also forces her to spend most of this episode bouncing in and out of the Batcave, accomplishing nothing beyond hallucinating about Alice and her dead mother, while also bullying Mary into not intervening in her vendetta against Alice, despite the fact that this is completely against the Hippocratic Oath, twice! I know Mary is not yet a real doctor, but this is further proof that she really shouldn’t be!

At this point, Ryan is in desperate need of a lecture from Rachel Dawes. You see, the idea of Ryan initially rejecting Batwoman’s (and by extension, Batman’s) ‘no killing’ code is actually fairly promising on paper. She doesn’t yet see herself as a true superhero, and is supposed to be more or less fine with simply operating as a vigilante. That’s great, but Batwoman is still trying to have its cake and eat it too, portraying Ryan as raw and damaged, yet also refusing to truly question or scrutinize her attitude about being Batwoman! Ryan is not talking about justice when it comes to Alice! She’s talking about revenge! That’s literally the opposite of what the Batman Family is supposed to stand for! Oh, and what happens after Ryan’s fateful confrontation with Alice in this episode? Nothing! She just decides in the moment that Alice isn’t worth it, because she sees her adoptive mother for a second (that’s stupid), and thus plants a tracker on Alice so that Team Batwoman can follow her to Coryana. Bullshit! Talk about a cop-out ending to an initially promising internal conflict!

Surprisingly, the best story arc on Batwoman this week seemed to be headlined by the Crows, even if this subplot once again feels like it was aborted right when it truly got interesting. Again, Batwoman just feels like it’s found itself in another tailspin, following original lead, Ruby Rose’s departure. The series has no idea where to go or what to do with its ongoing plot elements! Still, I do like the idea of Sophie bearing witness to an increasingly obsessed and desperate Jacob, who finds the Hamilton Dynamics team that was experimenting on Amygdala and the Desert Rose, and previously stole the map to Coryana, all dead under mysterious circumstances. What’s worse is the fact that Safiyah’s agents have also burned the map to Coryana, effectively leaving the Crows with a cold trail. Jacob inevitably starting to come apart after once again losing a lead on Kate, before Sophie is inevitably pushed to make compromises for Team Batwoman, could once again make the Crows excel as a wild card faction in the Arrowverse’s Gotham during the following weeks. I hope so, anyway…

Like I said though, I feel like Batwoman just needs to scrap the whole Coryana/Desert Rose conflict as soon as it possibly can. It’s full of pointless, pandering romantic drama that doesn’t service the show’s over-arching narrative, plus the more Coryana seems to intrude on Batwoman’s main character arcs, especially that of Alice, the more it keeps making them worse! It’s already apparent that Kate no doubt won’t be found on Coryana to boot, and that Safiyah’s no doubt bluffing in order to control the spread of the Desert Rose! Thus, “It’s Best You Stop Digging” is quite possibly one of the worst Batwoman episodes that the show has farted out to date, and that’s saying a lot! Alice’s and Safiyah’s arcs are both ruined by a horrendous twist regarding Alice’s origins, while Ryan continues to prove that she’s an inconsistent, self-important moron that just keeps finding new ways to insult the legacy of DC’s Batman Family characters every week!

Batwoman really needs to go back to the drawing board again, and there’s just no way around it. The whole Coryana storyline is really starting to go down in flames, especially considering that the show’s attempts to pivot Safiyah away from her tumultuous romantic history with Kate Kane from DC Comics lore really aren’t working at this point. All the while, the False Face Society presumably continues to run rampant around Gotham, while everyone from Team Batwoman to Alice to the Crows just keeps chasing their tails trying to get to Safiyah. Could we maybe go back to focusing on Black Mask’s crew, please? It seems like they’re poised to be much better villains, with much better story possibilities available to build around them!

Batwoman 2.7: "It's Best You Stop Digging" Review
Batwoman hits a new low this week, as the show makes a fatal misstep with Alice's backstory, while Ryan continues to accomplish almost nothing of importance.
THE GOOD STUFF
THE NOT-SO-GOOD STUFF
2021-03-14
48%Overall Score
Reader Rating: (0 Votes)
0%