In a world where there are a lot of entertainment options, certain things stand out more than others. When it comes to scary video games, one such title is Tarsier Studios’ Little Nightmares, which shocked and impressed me when I first played it back in 2017. To say that it’s one of the more under-appreciated gems from the last generation of consoles would almost be underselling how memorable and creative that game truly was. Thus, if you haven’t played it it behooves you to do so. That is, unless you happen to scare easily.

After a several year-long wait, Little Nightmares has been followed up with its promised and anticipated sequel, which is simply dubbed Little Nightmares II. The key word in all of this is nightmares, because both games are full of them.

While the first outing took place on a massive and incredibly disturbing ship, Little Nightmares II features a larger world, which is being corrupted by the hum of a strange signal tower. There, we find a boy named Mono who, for whatever reason, likes to wear a bag over his head, although that’s just one of his available hats. When we meet the young lad, he’s in quite the predicament. It also isn’t long before he encounters a new friend and ally who will be familiar to those who played the first game. Of course, I’m talking about Six, who was the protagonist of our first adventure within this disturbing and unsettling series. 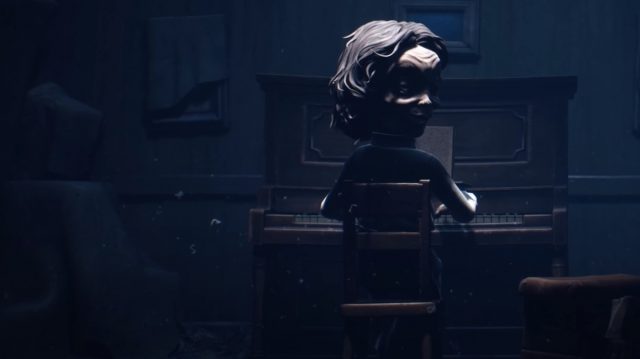 Mono and Six must work together to escape the horrors that await them in this messed up town or city, and must be brave enough to venture through some of its nightmarish locales in order to do so. There’s the school with its sadistic teacher, the woods with its devilish hunter, and one of the most disturbing hospitals known to fiction. I’ll never forget the latter two.

Of course, this is once again a puzzle/platformer where one must use the environment to his or her advantage. The pathway forward isn’t always clear, and it’s almost always going to be dangerous, so you’ll need to keep your wits about you and examine everything in the immediate area. Shelves, ledges, boxes, vents, doorways and windows are your friends, as are hiding spots that let you remain hidden from the even more frightening creatures who inhabit this shockingly scary sequel.

As with before, this sequel features well thought out puzzles that are both intriguing and challenging, and skirt the line between requiring thought and being too obtuse. I’m generally not a fan of puzzle games, but I do enjoy these. That doesn’t mean anything about this sequel is easy, though, because if you’re like me you’ll die a lot. The best way forward isn’t always clear, and there are lots of monsters that love to snatch Mono up and eat him when he falters, so take your time and be careful. 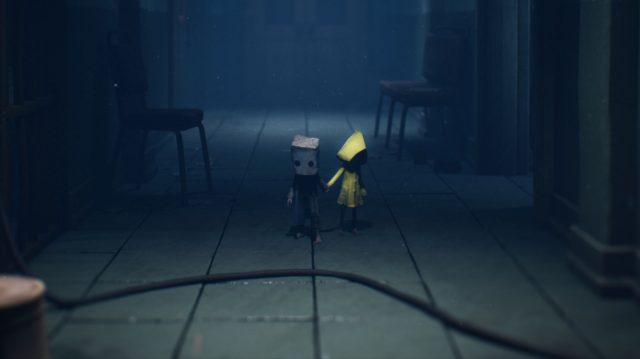 You’ve likely already guessed this, but the main change here comes in the form of cooperative puzzles that require you to work with the AI to progress. Sometimes it’s as simple as having Six boost you up, so that you can climb into a vent or window. At other times, you’ll need her help to carry fuses to their respective boxes. Thankfully her A.I. is quite solid.

Little Nightmares II also introduces combat and chase sequences, both of which can be frustrating. The former involves picking the occasional pipe (or something similar) up and using it to bash creatures that come running at you, while the latter involves running from monsters like the Hunter. There are places to hide from his sight, but he’s not afraid to shoot and destroy your cover.

The combat can be a bit clunky, because it can be difficult to tell if enemies (like disembodied mannequin hands that skitter like spiders) are close enough to hit. This is due to the game’s 2.5D design and the occasional depth perception problem that comes with it. You’ll have to be adept, though, because the pipe is heavy and slow, and a miss can leave you open to attack. 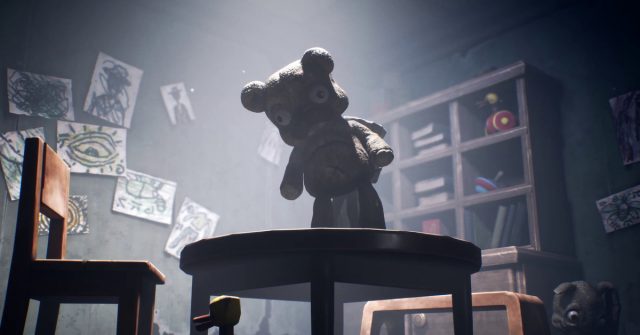 Lastly, it’s important to note that there are some collectibles. These come in the form of hats, which are sometimes easy to find and sometimes pretty well hidden. This system allows for customization, because — as I hinted at before — it’s possible to change Mono’s hats whenever you’d like. If you aren’t a fan of the paper bag over his head, find something different and choose it. I used quite a few of them, but didn’t find them all.

If I didn’t mention it before, you should also go in knowing that the platforming is good but not perfect. You will get frustrated from time to time, and it’s a minor issue that has plagued this series since day one. Again, a lot of it has to do with the 2.5D design and its limitations. The developers did a great job with this sequel, much like they did with its predecessor, but neither game is flawless. Thankfully you’re not punished much when you fail or perish.

What Little Nightmares and Little Nightmares II do best, though, is both creature and world design. I’ve watched a lot of horror movies, read a lot of horror novels and played quite a few of the genre’s video games since the early 90s, yet I’ve never seen anything like the things that inhabit this world. They’re pure nightmare fuel, and that’s especially true of the mannequins in the hospital.

Now, let’s talk general presentation: Visually, this is a stunning and incredibly impressive game, and the same is true of it in audible terms. The atmosphere is top notch and almost second to none, and it really needed to be to create the type of tension that the developers obviously aimed for. You never truly know what’s around the next corner, and the scare factor loves to increase.

If you liked Little Nightmares, there’s no reason not to purchase and play Little Nightmares II. Conversely, if you’ve never played one of these games before, you’d be better served by acquiring and beating the original first. This is a sequel that carries on from its predecessor, and while it’s a really good game, it’s not the same without its prequel. Either way, make sure to play these games, unless you find their genre and subject matter to simply be too much.

This review is based on the Xbox One version of the game, and was reviewed using an Xbox Series S review unit. We were provided a code by Bandai Namco’s PR.

Little Nightmares II Review
Little Nightmares II is a very good sequel, and an excellent horror game in general. It's one of the scariest things this desensitized, horror fan of a reviewer has ever experienced.
Visuals90%
Audio91%
Gameplay80%
Storyline79%
The Good Stuff
The Not-So-Good Stuff
2021-03-18
85%Overall Score
Reader Rating: (0 Votes)
0%