It’s always nice when a game comes out of the blue and surprises the Hell out of you. This is especially true when said game is an indie title with limited buzz or word of mouth.

The above is exactly what happened back in 2014, when I was appreciably sent a review code for the first Beach Buggy Racing on Xbox One. At the time it was a game that I hadn’t heard much about, but one that looked so interesting that I got excited about it. Thankfully it ended up being even more fun than I’d hoped, and cemented itself as one of the generation’s more under-appreciated gems.

Although Vector Unit’s Beach Buggy Racing never had the budget or development capabilities required to compete with the best of its genre, it did the best with what it had. The result was a game that was better than it seemed to have any business being, although I mean that with love as opposed to arrogance. A fun, very competent and easy to recommend kart racer that was a blast to play through and attempt to complete in full, albeit one that was a bit too difficult at times.

It’s hard to believe that around seven years have passed since I first played that game, but it’s fact. I also feel like I heard about this sequel a long time ago, and had since forgotten that it was in the works. That isn’t to say that I’d forgotten about Beach Buggy Racing, though. I sometimes find myself looking back on my time with it fondly, because it was such a pleasant surprise.

Beach Buggy Racing 2: Island Adventure has just drifted its way onto Xbox One, PlayStation 4, Nintendo Switch and PC, but has apparently been on mobile platforms since 2018. I’m glad that it’s finally made its way to controller and keyboard-based devices, even though it’s not the fantastic kart racing sequel that I was hoping for.

Most kart racers are based around cups, championships and podiums, although the sub-genre has branched out more into adventure and story modes in the last decade or so. Island Adventure is one such title, because its main draw is an adventure mode that spans a rather large map that is made up of different regions, like a beach, a jungle (complete with dinosaurs) and a desert. If you decide to purchase this title, you’ll likely spend a good amount of time playing this surprisingly lengthy and robust mode.

Think of the map as being something out of a Super Mario Bros. game, because that’s basically how it’s displayed. There are different icons representing different things, like single races, tournaments, special races and the garage, which offers upgrades for all of your vehicles. All of that is driven by a star based reward system, which offers three for first place, two for second and one for third. You’ll need to earn a set amount to open the star gates that block your progress to new areas and secrets, by which I mean unlockable racers and new weapons/power-ups.

The aforementioned special races come in a couple of varieties, with the first being firework races that task you with speeding through a familiar course while trying to avoid touching the many fireworks that boobytrap its driveable spaces. It’s joined by time trial and time trial cups, which are what you’d expect, and drift attacks that award points based on how well you drift around their corners.

Adventure mode definitely has a lot of things going for it. It’s got a large map, lots of events, vehicle upgrades that are chosen by the player and weapons, cars and racers to unlock. There’s a lot to it, and it’s certainly bigger than I would’ve ever expected, both in terms of map size and longevity. That said, it does have a problem, and it’s an issue that plagues the whole game. That would be repetition; something that is accentuated by a surprising amount of recycled content from the original Beach Buggy Racing.

In addition to Adventure mode, you’ll also find a set of challenging cup-based tournaments, the ability to play single races, time trials and special events, and local multiplayer for you and multiple friends. When you tinker with the latter options, you’ll find a very customizable game, which lets you select which power-ups/weapons will be available to racers, how many times they can use them, and how long the race will last for.

Of course the most important thing about any racing game is how it drives. Thankfully, Beach Buggy Racing 2: Island Adventure controls and plays well, with accessible driving mechanics and basic drifting. It’s easy to jump in and get the hang of, fun to play, and offers a solid amount of content. That said, it continues to be surprisingly difficult, just like its predecessor was. If you play on normal you’ll likely find a good challenge, unless you’re someone who plays this type of title a lot. Even ‘relaxed’ (easy) has some bite to it.

There are quite a few different vehicles to unlock, from more traditional buggies to monster truck like chassis, and they all have their own individual stats. It’s similar when it comes to racers, as the approximately fifteen included drivers all have different special powers. One can shoot beach balls onto the track, causing anyone who hits them to bounce, while others can gain extra boosts, attack the drivers in front of them or create a trail of flowers that gets in the way of others. It’s important to experiment and find the mix that works best for you. Just know that it’ll take a good amount of time before you’ll be able to unlock everything.

The aforementioned weapons and power-ups come in varying forms, too. There are the more traditional rockets, heat seeking missiles (which target the leader and burn everyone they come in contact with), earthquakes, fireballs, toy jacks, an anti-gravity option and more. As you play Adventure mode you’ll find that your opponents have access to some that never appear for you. This is because you have to actually unlock them, by breaking star gates.

What’s neat about this power-up system, though, is how it allows you to carry two at a time. Each one is mapped to a different button, too, meaning that you can choose which one to use at whatever time. Your driver’s ability is usually limited to two or three per event, but there are quite a few item bubbles to pick up. Some are even double bubbles, offering an item for each button.

It surprises me, though, that a game that’s been in development for this long features so much recycled content. Many of its tracks repeat themselves quite often, and more than a couple were familiar to me from the first game. As a result, Beach Buggy Racing 2 feels kind of rushed, and doesn’t come off as a full sequel. It’s still a fun, competent and solid game, but it’s not the great sequel I was hoping for. Then again, seven years have passed, and this mobile-feeling game is sort of stuck in the past. 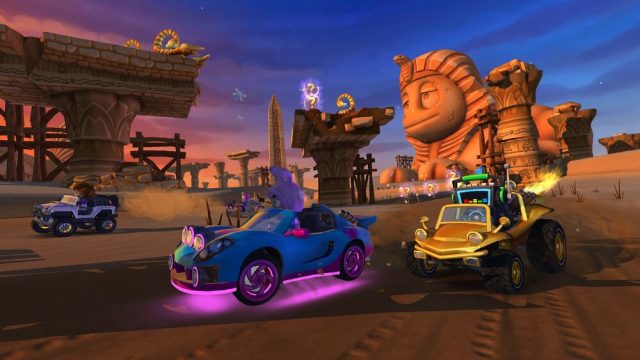 On the presentation side of things, this is a nice, colourful and pleasing experience. It looks good, runs smoothly, and is pretty polished. I haven’t noticed any major issues thus far, and obviously hope not to.

The music can be kind of grating, though, so be warned about that. It’s quite upbeat, but gets to be a lot after a while. I recommend listening to your own.

At the end of the day, Beach Buggy Racing 2: Island Adventure is a solid game and something that is certainly worth checking out if you’re a fan of this genre. At $25.99 Canadian, it’s a bit pricey, but there is a good amount of content to be found inside, including everything I’ve mentioned and some hidden Easter eggs that I honestly did not find. It’s simply not as good, surprising, impressive, or well made as its predecessor, which I loved. This is due to it feeling more like a dated mobile game than ever before, and its inclusion of a surprising amount of recycled content after so many years have passed.

This review is based on the Xbox One version of the game, which was played using an Xbox Series S review unit. We were provided with a code by Vector Unit.

Beach Buggy Racing 2: Island Adventure Review
Beach Buggy Racing 2: Island Adventure is a fun and pretty well made kart racer, which should appeal to fans of the genre. It's not as impressive as its predecessor was, though, and feels a bit dated.
Visuals73%
Audio53%
Gameplay70%
Storyline48%
The Good Stuff
The Not-So-Good Stuff
2021-03-18
65%Overall Score
Reader Rating: (0 Votes)
0%