NOTE: Full spoilers for this episode of, “Superman & Lois” are present in this review

Superman & Lois flexed its human element above all else last week, proving that the series doesn’t need a huge focus on its comic book-inspired plotlines to thrive as an excellent new addition to The CW’s lineup of DC dramas. This left the show primed to go back to a bit more of its conventional superhero focus this week in, “Haywire”, as a lesser-known Superman Family villain wreaks some havoc in Metropolis, right when some shocking changes hit a fellow student of Jonathan’s and Jordan’s at Smallville High. This tears Clark between both sides of his identity, leaving Lois lost in the shuffle, as she struggles to keep Morgan Edge from securing dominion over Smallville’s land.

Despite Edge having no direct interactions with Superman (or even Clark, really) on this series so far, and despite him being a long-running human enemy of the Superman Family in DC Comics lore, Superman & Lois continues to excel when it comes to portraying Edge as an enemy specifically designed for Lois. Naturally, the battle of wits between Edge and Lois once again reaches more new heights this week, after Edge uses Lois’ ongoing Daily Planet contract to prevent her from printing more of his suspicious history in the Smallville Gazette. This in turn motivates Lois to try and strike at Edge during a vote for property rights over Smallville’s mines. Specifically, Lois tries to get around Edge’s obstruction by having Clark speak at the Town Hall meeting wherein Edge would secure the rights to the Shuster Mines, which unfortunately happens to coincide with a prisoner escape in Metropolis. 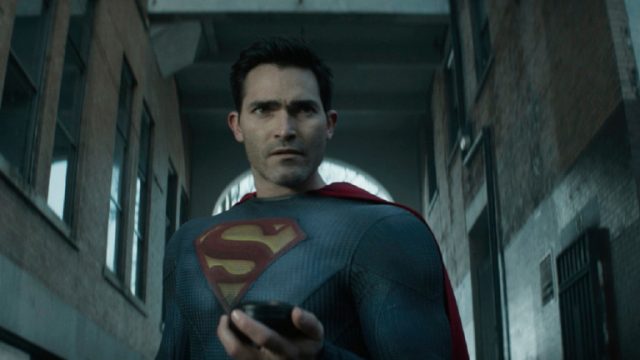 To that effect, this episode presents a potentially familiar villain-of-the-week for avid Superman/DC fans, Thaddeus Killgrave, a mad scientist armed with lots of deadly anti-Superman tech. While Killgrave is a lesser-known Superman foe from DC Comics lore, he does nicely fill in as an effective Toyman surrogate for Superman & Lois, considering that Supergirl has already monopolized the Toyman arcs of the Arrowverse. The best part about the Arrowverse’s Killgrave as well is that he also appears to be affiliated with Intergang, an entire squad of outrageously-outfitted thugs from DC Comics lore that have been foreshadowed in the Arrowverse for many years, between mentions and nods on both Supergirl and Arrow. It’s about damn time that Intergang finally showed up in the flesh on an Arrowverse show, but unfortunately, their debut is a bit unimpressive here. One clap from the Man of Steel, and they’re all down for the count. Lame! Still, I imagine both Killgrave and Intergang will show up on this series again in the future, so it could be worse.

The quick exit out of Metropolis for Supes is largely due to having to intervene in a Smallville High student, Tag Harris, exhibiting powers after breaking his arm due to the mine explosion inadvertently caused by Jordan’s heat vision during Superman & Lois’ first episode. Apparently, Tag has begun to vibrate uncontrollably, which appears to give him accelerated healing, at the cost of making his body unstable and uncontrollable. Even Jordan is ultimately helpless to assist Tag as well, though Clark manages to calm Tag down by bringing him to the upper atmosphere, before Tag is sent off to some unspecified ‘school’ for underage metahumans. Uh, isn’t that something from the other superhero universe, guys? Well, I guess a super-powered school for the ‘gifted’ is officially a thing in the Arrowverse now too.

In any case, Jonathan and Jordan hesitate to call their father for help with Tag at first, and this plays off of General Lane urging his grandsons not to ‘distract’ their father from his duties. Once again, Superman & Lois keeps knocking it out of the park with its family drama, as no one explicitly appears in the right, after Lois and Clark inevitably hear about General Lane inadvertently endangering their sons. Obviously, Lane believes he’s in the right though, even if he does eventually back off a bit, giving Clark and Lois a bit of personal time to help reconcile after Clark inevitably fails to show up at the Edge meeting for Smallville’s mining rights. Well, mostly. As it turns out, this is simply so Lane has time to put together a ‘contingency plan’ for Clark, one egged on by the suspiciously absent Captain Luthor, and his mysterious numbered emblem…

Even as Edge continues to mostly operate in the realm of human conflict as well, exploiting Daily Planet contracts and winning the support of Smallville’s citizens with community outreach and interaction, we also get a very promising clue as to what Edge is up to in the town, after Lois inevitably fails to stop Edge from winning the Shuster Mines. Apparently, the Shuster Mines are rich in X-Kryptonite, which, in DC Comics lore at least, has the power to grant metahuman abilities to regular humans that are exposed to it! This no doubt explains how Leslie Larr was able to give powers to Edge’s fixers, such as the super-strong thug from last week, as well as how Tag could have been accidentally turned into a metahuman. Thus, a key part of Edge’s sinister plans seems to be coming together here. The question is, is Edge looking to use the X-Kryptonite himself? Or is he looking to sell it to a villainous faction like Intergang?

Finally, it was nice to see the lighter side of Lana this week, following a darker turn for both Lana and Sarah during the previous episode. Sarah also seemed to be in a much better mood in this episode, nicely building off of the sweet moment she shared with her mother last week, following their big talk about their respective issues. For Lana however, this episode crucially spotlights the other side of her strained marriage to Kyle, where she tries to give her husband the benefit of the doubt to Lois, after taking Lois out for a commiseration drink, following Edge winning Smallville’s mining rights. This is important to further flesh out Lana’s character, who effectively stands with the same interpretive stances as most anyone else in Superman & Lois’ core cast at this point. This is extremely refreshing for an Arrowverse series, especially after veteran Arrowverse shows like Supergirl and Batwoman quickly developed a habit of presenting one-sided debates with merely the illusion of depth, rendering their characters as insultingly simple archetypes that pretend they have something to say about the real world, while also demonstrating a fundamental, infantile lack of understanding regarding how anything in the real world truly works!

This further proves that Superman & Lois marks a much-needed boost in maturity and depth for the Arrowverse, at least during its first few episodes so far. “Haywire” fails to make the most of Intergang’s long-overdue debut in the Arrowverse, along with its representative villain-of-the-week, Thaddeus Killgrave, but Superman & Lois still gets it right where it counts, namely its homegrown family values and heart. Likewise, getting a peek at Morgan Edge’s inevitably nefarious agenda, which involves a mother load of X-Kryptonite, is also very exciting, proving all of Lois’ worst instincts, while Smallville at large remains oblivious to Edge’s shady plans. Best of all though, Superman & Lois is doing a great job of developing its characters, of all generations, as multi-dimensional, complex human beings, not idealized social justice warriors that keep bringing an unwelcome, ill-informed soapbox to their superhero dealings. This is quickly establishing Superman & Lois as a huge improvement over the heavily flagging Supergirl, which is mercifully being brought to an end this year. I can’t say this is a bad thing for DC fans in particular, especially when Supergirl concluding means that it can stop hogging any more Superman Family storylines that would be better served from Clark’s and Lois’ perspectives.

Superman & Lois 1.4: "Haywire" Review
Superman & Lois continues its tradition of rich family drama for the Kent's and the Cushing's this week, while Superman repels an Intergang attack in Metropolis.
THE GOOD STUFF
THE NOT-SO-GOOD STUFF
2021-03-18
87%Overall Score
Reader Rating: (0 Votes)
0%