The third of three series premiere episodes for Invincible presents what appears to be the most consistent and polished episode that the show has delivered so far. This appears to indicate that Invincible is on the right track, and could keep getting even better throughout the rest of its Season 1 run in April. “Who You Calling Ugly?” is able to ride high off of the public revelation that the Guardians of the Globe have all been killed, necessitating a new flagship superhero team to protect Earth. Auditions are held under the supervision of Teen Team member, Robot, who eventually puts together a new squad of heroes, right as Mark begins to realize how challenging it is to live a double life.

This double life trope is one of the most common superhero tropes around, and it was inevitable that Invincible would eventually have to touch on it. The challenge doesn’t come into play with Mark’s studies or other activities either, but instead with love interest, Amber Bennett, who has now passed Mark off her phone number. In true superhero trope fashion however, Mark’s first date with Amber is interrupted by Cecil, who demands that Mark answer his phone and assist in stopping an attack by super-villain, Doc Seismic. This doubles as Mark’s latest chance to battle alongside Atom Eve as well, who faces her own drama after she catches her boyfriend, Rex Splode cheating on her with Dupli-Kate.

Considering that many of Invincible’s protagonists are teenagers, relationship drama is pretty much a given for the show at this rate. That being said though, the way that the relationships are being presented and developed currently feels a tad rushed. It’s difficult to invest in Eve’s drama with Rex for example because we literally just met them, and have no context for their relationship or connection to one another. Likewise, Amber unrealistically forgives Mark for walking out on her for an entire hour (Debbie didn’t even try to run interference here?), which eventually leads to a make-out session that Eve conveniently witnesses from outside of Mark’s window. It’s too early in Invincible’s run for any of this to matter yet, frankly.

Fortunately, this episode still supplies a healthy chunk of superior storylines to compensate for the fact that its character romances aren’t really registering yet. These of course kick off with Robot’s superhero tryouts, which showcase a group of all-new superheroes that surprisingly don’t exist in Invincible’s source comics! If you’ve read those, you’ll likely know who’s recruited onto the new Guardians of the Globe team in advance, namely Shrinking Rae, an Atom-inspired superhero that can change her size (she’s also gender-swapped from the male ‘Shrinking Ray’ character of the source comics), and Monster Girl, a Hulk-inspired heroine that can turn into a super-strong troll-like form (a Marvel character analog for a change!), but also de-ages every time she does, making her a 24-year-old woman with the appearance of a 12-year-old girl. 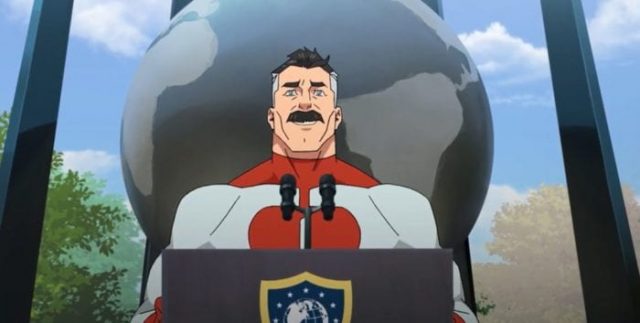 The newly-formed Guardians of the Globe, which more or less comes together from these new heroines and the old Teen Team (save for Eve, who rejects a position because she’s angry at Rex and Kate), as well as an adult superhero veteran called Black Samson (who appears to be a Black Lightning-inspired character that lost his powers, voiced by another Walking Dead actor, Khary Payton), are thus primed to protect the planet, though as I said, only Mark and Eve ultimately battle Doc Seismic here. Doc Seismic, a mad scientist with earthquake-triggering gauntlets, attacks Mount Rushmore, and tries to drop civilians into a series of fissures, allowing for another spectacular battle that nicely flexes Invincible’s animation. Mark and Eve manage to save everyone, thankfully, though Doc Seismic is seemingly killed during the battle, leaving Mount Rushmore full of cracks and magma that I assume someone will eventually fix, if not Mark and Eve.

All the while, Damien Darkblood, the John Constantine analog for the Invincible universe, is still poking into the business of Omni-Man, even attending the funerals of the original Guardians of the Globe. Darkblood takes Nolan’s statement at the funeral, but finds that it omits many details, which is unsurprising, considering that Nolan is the one that killed the Guardians. Darkblood later tries to get answers from Debbie during an epilogue sequence as well, which confirms that Nolan lied in his statement. Unfortunately though, Darkblood may be in danger now, since Nolan unwittingly intervenes in the questioning, sensing the cold air that forms wherever Darkblood appears. Can you kill a demon in this universe? Hopefully not, or else Darkblood might have just made a very dangerous enemy!

Nolan/Omni-Man isn’t the only dangerous enemy that appears to be lurking in the midst either. Despite the lively battle against Doc Seismic beforehand, the true climactic turn of this episode occurs within a super-villain prison, where the Mauler Twins are being held. A mysterious ally manipulates the machinery to ensure that the Mauler Twins are set free, charging through a whole squadron of soldiers with ease, and eventually making their way to the surface of wherever they are. One of the Twins is seemingly shredded to pieces by the last line of defenses, but the real shock is the mystery figure ensuring the Twins’ escape; Robot! As if Omni-Man being a villain-in-the-making wasn’t enough, Robot is also a sinister presence with his own shady agenda, one that the new Guardians of the Globe appear to be a key part of!

With this big revelation, this past week’s trio of series premiere episodes for Invincible wraps up, fully cementing the series as a promising adult animation superhero drama for Amazon Prime Video! Invincible has a few kinks to work out here and there, but it otherwise presents a strong and satisfying adaptation of Robert Kirkman’s Image Comics superhero franchise. The show seems to have more fully found its legs by this third episode, even if the expected adolescent relationship drama remains a weak link for now, largely because the show hasn’t developed enough for it to be meaningful yet. Still, the remnants of the Teen Team forming a new Guardians of the Globe that’s already compromised by the shady agenda of Robot is very exciting, as is Damien Darkblood provoking an increasingly suspicious Nolan with his continued questions.

Nonetheless, we’ll have to wait until this coming Friday for more answers. I suppose the fact that I’m disappointed by this is proof that Invincible’s first three episodes have grabbed me, and I’m excited to see what’s next!

Invincible Series Premiere Part 3: "Who You Calling Ugly?" Review
Invincible's third episode is its most refined and satisfying yet, as Mark witnesses the formation of a new Guardians of the Globe team, before his first date is interrupted by a super-villain attack.
THE GOOD STUFF
THE NOT-SO-GOOD STUFF
2021-03-29
87%Overall Score
Reader Rating: (0 Votes)
0%