Well, the good news about Batwoman this week is that the series can finally start moving on from its rather frustrating Coryana storyline. The bad news however is that the show’s second season remains incredibly poorly written during the transition back to the False Face Society, with, “Rule #1” once again wasting too much time drowning in infantile social justice rhetoric and insufferable characterization, rather than devoting more attention to its superior subplots with Jacob and Alice. Batwoman does get one big new addition right however, and that’s the introduction to its newest arch-villain, Roman Sionis, a.k.a. Black Mask, another major Batman Family villain that’s finally being given a chance to shine on live-action television!

Black Mask is among the small handful of recognizable Batman Family villains from DC Comics lore that wasn’t properly portrayed on FOX’s former live-action Batman prequel series, Gotham, at least beyond the character’s father appearing briefly as a bit of foreshadowing for a future Batman career that viewers never ultimately saw. Ironically, Black Mask did make his live-action debut in the DC Extended Universe movies last year, as the villain of the cult favourite Birds of Prey, but that version took a lot of liberties from his comic book inspiration. Batwoman’s Black Mask however, to his credit, is much closer to his counterpart from DC Comics lore, being a savage, sadistic crime boss who quickly cements himself as a deadly new antagonist to Ryan and her friends!

Unfortunately, Black Mask’s introduction to the Arrowverse’s Gotham is too often tripped up by a truly ridiculous core plotline, one that takes up way too much focus, and only gets worse with every passing minute. This plotline kicks off when Gotham’s police commissioner is murdered on the steps of City Hall in a drive-by shooting (Gotham was conveniently, unrealistically deserted when this happened), simply because he spoke up about wanting to police Gotham’s plague of Snakebite. Okay, this open murder of a top-tier public official is a pretty questionable idea for Black Mask’s gang, but regardless, a young tagger happens to witness the murder, and that tagger also happens to be Sophie’s younger sister, Jordan! That actually sounds cool on paper, right?

Well, leave it to Batwoman to yet again flub a promising idea, and hit every branch on the cringe tree on the way down. Jordan, first of all, is an insufferable character! She spends this entire episode spouting nothing but inane social justice catchphrases, while in turn refusing to cooperate with Batwoman on general principle, because she’s apparently no different than the legal institutions of the world. Um, Batwoman is a vigilante, you stupid girl! She’s literally the exact opposite of a legal institution! If anything, it would have made a lot more sense if Jordan specifically complained about the Crows, which would have given her more of a leg to stand on. Instead, Jordan creates pointless tension with Ryan, by complaining about Batwoman’s ‘style’ after Ryan saves Jordan’s life from False Face thugs (which does nothing but make Jordan look even more like a spoiled, self-righteous brat!), only to later use said tension as an excuse to suggest Sophie should date Ryan. Ugh, Batwoman, you’re already juggling too many forced, terrible ideas in your current narrative! You don’t need to add a pointless Ryan/Sophie relationship onto that pile!

I suppose it is nonetheless true however that Ryan’s and Angelique’s strained relationship did improve this week, if largely due to the effective menace of Black Mask’s character. After Angelique tries to take Ryan back, only to be rejected, Ryan is ultimately forced to contact Angelique anyway, after a seemingly innocuous bit of information from Jordan pegs Angelique as the police commissioner’s killers’ getaway driver. This allows Sophie and Ryan to apply pressure to get Angelique to testify, only for Angelique to eventually be violently kidnapped, and intimidated by Black Mask. Ryan also ends up captured by Black Mask while trying to intervene, having to be bailed out by Sophie, before Angelique takes the fall for the commissioner’s murder, to keep Ryan safe from the False Face Society. Admittedly, this is a solid turn for Ryan and Angelique as star-crossed lovers, even if it completely eliminates the need for more forced tension between Ryan, Mary and Luke beforehand, after Ryan initially refuses to turn Angelique in to the police. Team Batwoman really needs to start trusting each other more. They’re almost as bad as Team Arrow, honestly!

So, ultimately, we’re left with Batwoman having many of the wrong priorities, again, despite the show finally leaving Coryana behind it at this point. Jacob and Julia refusing to accept the results of Kate’s death meanwhile, complete with Julia eventually discovering evidence that her mind was tampered with, should have been explored to a greater degree, especially when Jacob abandoning his post with the Crows is ultimately barely addressed. Likewise, Alice wastes this entire episode talking to a hallucination of a younger Kate, which eventually leads her to discover that she can create a world where Kate never existed. Um, what? What was the point of that? Perhaps this is meant to tie in to the revelation that Black Mask is working with Safiyah’s hypnotist, Enigma, who appears to have at least a cosmetic connection to the Arrowverse’s unseen Riddler, between a green costume and a cane. Either way though, none of these subplots were fleshed out nearly enough to make an impact, ultimately being overshadowed by Batwoman continuing to spend too much time trying to bait Gen-Z viewers with supposedly ‘hip’ social justice leanings.

Yet again, anyone expecting an actual, universally appealing Batman Family series is left out in the cold. Still, I will acknowledge that at least Black Mask is portrayed very well so far, with guest star, Peter Outerbridge making a great first impression with his kooky, yet menacing portrayal of the character. Black Mask’s agenda is even built on a really great idea, namely that he’s trying to stand up to corrupt institutions like the Crows, particularly after they aided Kate’s former Batwoman, who supposedly killed Black Mask’s daughter. Hopefully, the show can go somewhere interesting with that, because Black Mask is so far a huge improvement over Safiyah, who was ultimately little more than a lovesick pity case, and a far cry from her badass pirate queen inspiration of DC Comics lore. 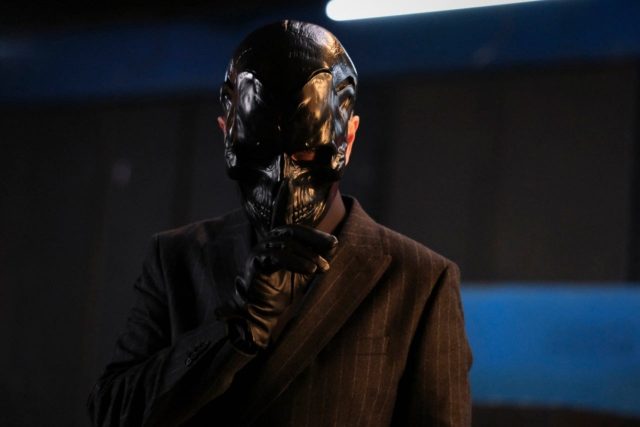 “Rule #1” sadly delivers another mess of an episode for Batwoman, even if it at least introduces the Arrowverse’s Black Mask on the right note. Angelique belatedly repaying Ryan’s tragic prison sentence is also a promising turn, in fairness, one that further draws attention to the fact that Ryan and Sophie have no business being forced into a romance, at least not this early. Speaking of that, I really hope that Jordan doesn’t stick around after this week. I don’t hate the idea of Sophie having a sister that’s cut from a very different cloth than her, but Jordan is an extremely irritating character that did nothing but cause trouble for the sake of cheap drama. Likewise, Mary’s and Luke’s continued squabbles with Ryan and each other over who has jurisdiction where and how they should feel about this or that is getting really old at this point! Frankly, it’s just making all three of these characters look bad! As cheesy a solution as it is, hopefully their middle school Team Batwoman code of making the world better and believing in each other will finally get these three to smarten up and start functioning as more of a unit. Even Oliver Queen would tell them they’re being too melodramatic!

Batwoman 2.9: "Rule #1" Review
Batwoman unfortunately remains a frustrating mess after moving on from its Coryana plot this week, though the series does at least introduce new villain, Black Mask on a solid note.
THE GOOD STUFF
THE NOT-SO-GOOD STUFF
2021-03-31
47%Overall Score
Reader Rating: (0 Votes)
0%