Pennyworth’s climactic Season 2 conflict is slowly starting to come into focus, and this has the series finally starting to more earnestly crank up its excitement factor. On top of this, Alfred’s future destiny as the adoptive father of Batman is also starting to develop its foundation in the Pennyworth universe, particularly as Alfred has his fateful confrontation with Gulliver Troy this week, right when the English League stares down what appears to be a certain doom. Throughout, “The Hangman’s Noose”, it quickly becomes apparent that the death of Lord Harwood hasn’t improved the dire situation facing London at all, nor that of this show’s lead characters, who simply find themselves up against an even more dangerous obstacle in Colonel Salt.

Salt, unsurprisingly, is an even more unhinged lunatic than Harwood ever was. He’s just a lot more polite and subtle than the increasingly deranged Harwood ultimately became. This episode does at least appear to begin with the English League gaining some traction in the effort to slow down the war, appearing to successfully negotiate peace talks with the Raven Union and the British military, only to instead be cornered into unconditional surrender by Salt. It turns out that learning about Project Stormcloud has ultimately forced London into an even tighter spot, giving Salt all the leverage he needs to crush the English League for good, while leaving Prime Minister Aziz and The Queen with no other options but imprisonment, and likely execution at the hands of Salt’s forces.

Even the Sykes sisters find themselves struggling to strike back at Salt after Harwood’s death, albeit for different reasons. Bet and Peggy got much more focus this week in any case, and that’s a welcome sight, especially when they once again occupy a darkly amusing subplot that easily serves as an episode highlight. The two conspire to kidnap Salt’s TV star girlfriend, Vikki, intending to murder her and send her body parts to Salt as intimidation, only for Katie to intervene and threaten to dump Bet if she returns to her old violent ways. This leads to the admittedly very funny solution of once again turning Vikki into a display gimp, to go alongside the military official that they already forced into such a hilariously awkward fate. The Sykes sisters may be just as aimless as Alfred throughout much of Pennyworth’s sophomore season, but at least they’re making a much funnier and more creative impression!

Fortunately, now that Alfred has finally abandoned his doomed quest to flee London, he can go back to focusing on more meaningful character development. His development is also nicely moved forward this week, after Alfred trusts Dave Boy to care for his mother, while he goes to confront Troy. Troy naturally gets the drop on Alfred however, and sends him into the forest, stabbing him beforehand, and forcing Alfred to be hunted. It’s a nicely twisted climax for Alfred’s affair and ultimate liberation of Melanie, who is presumably safe in America at this point. Better still is that the spirit of Bazza eventually appears to contact Alfred, and give him advice on how to take down Troy for good.

It’s a little cheesy, sure, but Bazza’s spirit quite literally coming back to haunt Alfred does at least allow him to devise a strategy through which to defeat Troy. After pretending that he’s weakened and about to fully bleed out, Alfred manages to lure Troy into an improvised trap, leaving Troy in ironically the same position that he left Alfred in. Even better is the fact that Alfred refuses to kill Troy after this, realizing with some help from Bazza’s ghost that he craves order, but also requires transgressions. This marks a standout way to further nudge Alfred along on his destiny of eventually becoming a surrogate father to Batman and the Batman Family characters, complete with Alfred mimicking Batman’s own code of refusing to kill his enemies, even if Alfred does put his own dark, violent touch on taking Troy down. Well, the Batman Family code is a work-in-progress at this point, obviously.

Speaking of a work-in-progress, Thomas’ and Martha’s storyline once again served as the only sour note in what’s otherwise a much better Pennyworth episode than most of Season 2 has delivered up to now. Amid London’s 48-hour deadline to surrender before Project Stormcloud is deployed on the city by Salt, Thomas and Martha decide to have another steamy hook-up, at which point Martha finally decides to confide in Thomas that she’s pregnant. Naturally, Thomas is surprised and upset by this sudden revelation, and the two have another argument. There is one good surprise here though, namely that the argument is exacerbated not by Thomas refusing claim to the baby, but instead insisting that he and Martha must get married, an idea that Martha is aggressively against. Thomas pushing the issue then leads to Martha storming out, and that’s the end of their storyline this week. Okay, granted, a surprise pregnancy and a forced marriage proposal is a more reasonable thing for Thomas and Martha to be arguing about, but seriously, these two really need to get over themselves! We already know that they’ll end up together in the end, and Pennyworth pretending otherwise yet again serves to merely waste the viewer’s time!

Beyond that, London’s obstacles are fully cemented when Salt is unsurprisingly elected the Raven Union’s full-time head chancellor. Alfred won’t even get a break following his defeat of Gully Troy either, since the final seconds of this episode reveal a major, highly shocking twist; Alfred’s father survived his bombing attempt on The Queen! Arthur is nonetheless confined to a life support chair, but the surprise survival of the Pennyworth family patriarch is bound to once again make the war personal for Alfred and Mary, after they gave up their initial chance to flee to America, alongside Dave Boy. 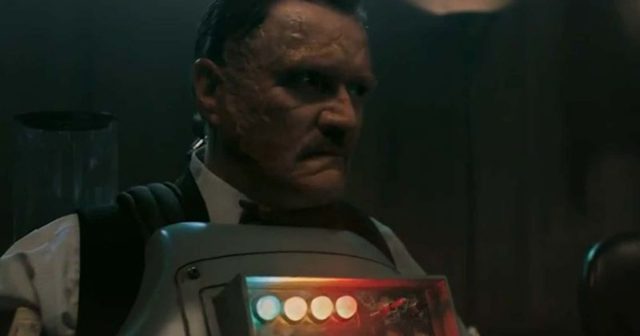 After spending far too much time chasing its tail throughout much of this season, it’s satisfying to see Pennyworth finally pulling its story focus together, and delivering a more exciting and consistent series of conflicts for its lead characters. Thomas and Martha are still lagging behind everyone else in comparison, but Alfred in particular took some highly rewarding steps forward in his character arc this week, steps that will feel all the more necessary after Alfred is inevitably forced to confront a still-living Arthur once again. Salt is quickly proving to be a devious and deadly replacement for the late Lord Harwood as well, thankfully giving Bet and Peggy more opportunities to headline kooky subplots while Bet struggles with the idea of being a better person.

Pennyworth will be taking next week off here in Canada at least, due to Easter, and won’t return until the following Sunday (this doesn’t appear to apply to Pennyworth’s U.S. airings on Epix), so those of us in the Great White North will have to stew even longer over London’s uncertain fate. Despite the extended wait for us Canadians though, I’m happy to see that Pennyworth is finally back on the upswing, preparing to deliver a well-realized battle for England that actually lives up to its full potential.