Invincible returned to a more grounded, humanized approach this week, once again putting humour aside in favour of focusing on a more relatable storyline for Mark and Eve in particular. “You Look Kinda Dead” primarily sees Mark and Amber go on a tour of the Upstate University campus with William, who is using the college tour as an excuse to reunite with a favoured lover, Rick Sheridan. Trouble always seems to follow Mark however, and that trouble manifests in the form of mad scientist, D.A. Sinclair, who kidnaps Upstate University students, and performs experiments on them, turning them into cybernetic killers called ‘ReAnimen’.

The bulk of this episode’s storytelling focuses heavily on Mark’s time on the Upstate University campus with Amber and William, which unfortunately leaves precious little time for the show to really absorb the fallout from Mark’s injuries at the hands of Machine Head and Battle Beast. In fact, Mark’s recovery is so quick and efficient that his mortal injuries might as well have not happened. Even Amber ultimately forgives Mark for missing out on the soup kitchen volunteer work before long, and with Titan completely absent this week, it feels like Mark entirely escaped consequences from his ill-advised battle with Machine Head. Instead, it’s Monster Girl and Black Samson that end up seeing the largest consequences here, as they both cling to life following their own injuries sustained against Machine Head’s hired super-villains.

Even then though, Black Samson in particular recovers rather quickly, even seeing a bunch of added strength after attempts to revive him by the GDA. This exemplifies the biggest problem with Invincible’s latest episode, namely that it has a lot of underdeveloped side plots that don’t really go anywhere of note. Monster Girl at least spends this entire episode incapacitated, and this does effectively show the more human side of Robot, who goes out of his way to find the obscure ingredients needed to re-activate Monster Girl’s healing abilities. At the same time though, another subplot is awkwardly shoehorned in for Robot this week, as he goes to the Mauler Twins to check up on the progress of his secret pet project. I’m sure this will go somewhere interesting before the end of this season, but Robot was one of several characters that more or less just ran around and did whatever the plot demanded this week, mostly just setting up for Invincible’s two remaining Season 1 episodes.

Fortunately, Mark’s time at Upstate University campus proves to be eventful, even taking his relationship challenges with Amber to effectively dramatic territory. This is despite the fact that Amber yet again terminates her relationship with Mark in the end, after he appears to flee from an initial ReAniman attack. Outside of providing some welcome action, this first attack by one of Sinclair’s ReAnimen also carries a big twist that will greatly influence Mark’s civilian life– William discovers that Mark is Invincible! This first ReAniman ultimately commits suicide by impaling himself on a school monument, but after Amber dumps Mark for his apparent cowardice in the face of danger (that’s a bit of an old superhero cliche, but whatever), William is nonetheless overjoyed at the revelation that his best friend is a superhero. 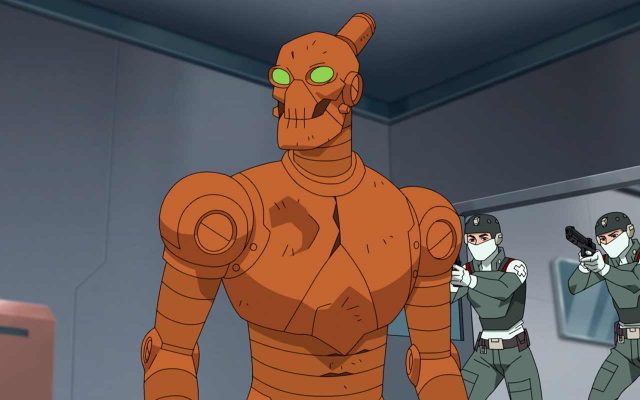 William being emboldened by the knowledge that Mark is Invincible ultimately leads to him urging Mark to investigate Rick’s eventual disappearance as well, after Sinclair targets Rick as a new ReAniman. Mark just wants to reconcile with Amber, but is forced to intervene in events as Invincible anyway, after William gets captured by Sinclair’s ReAnimen. As much as this makes for a bit of a quick, dirty climax for this episode, Mark struggling against the ReAnimen does set up an interesting new turn for the GDA, namely that the ReAniman technology appears to be able to damage Viltrumite bodies. After an angry Mark breaks Sinclair’s jaw and incapacitates him, the GDA also appear to take Sinclair into their own custody, likely to pick his brain about ways to counter Omni-Man.

It looks like the eventual battle against Mark’s father is slowly coming together, nicely nudging Invincible toward its first season’s overall climax over the next two weeks. On this note, Debbie puts the rest of the pieces together regarding Nolan’s brutal murder of the former Guardians of the Globe here as well, after visiting Art to study the DNA evidence on Nolan’s tattered Omni-Man costume. To Debbie’s horror, Art positively deduces that Nolan did indeed appear to kill the Guardians, confirming Debbie’s worst suspicions, and sending the Grayson family toward a horrific collision course. I have to admit that the show nicely played with expectations in this overall better subplot as well, as Nolan appears to corner Art, only to offer him beer and present the hand of friendship. Perhaps it’s a tactic to determine if Art sold him out, or maybe Nolan wants to manipulate Art so that he won’t go to the authorities. Either way, Debbie does confront Nolan with the truth during the final seconds of this episode, no doubt giving Mark a pretty tense house to return home to during the next episode.

It’s a bit annoying that Invincible’s subplots felt so scattered and undercooked this week, beyond Debbie finally discovering the truth about her husband’s superhero mass murder anyway. This was not only a bit irksome throughout Robot’s storylines, but also during Atom Eve’s subplot, as Eve flies away from home to try and volunteer super-powered help around the world… And that’s it for now. It’s a waste of a subplot, especially when the new Guardians of the Globe were pretty much entirely sidelined this week. Even so, “You Look Kinda Dead” still had some really good highlight moments, in particular William learning that Mark is Invincible, while Mark inadvertently gives the GDA an apparent lead on how to stop Omni-Man. There’s frustratingly little fallout from the big Machine Head confrontation so far, especially where Mark’s injuries are concerned, but Invincible is nonetheless continuing to stage an exciting climax for its debut season this week, as Nolan continues to lose the trust of those closest to him, right as Mark continues to struggle with the idea of sticking with his superhero mantle any longer.

Invincible 1.6: "You Look Kinda Dead" Review
Invincible fails to develop most of its subplots to a meaningful degree this week, though Mark's eventful tour of Upstate University delivers a more engaging narrative.
THE GOOD STUFF
THE NOT-SO-GOOD STUFF
2021-04-18
78%Overall Score
Reader Rating: (0 Votes)
0%