You can tell that Supergirl is really straining to find any excuse to tie in to the real world’s ongoing struggles with the COVID-19 pandemic. The show is in its last season, after all, and it won’t get another chance for this ripe social justice fun fair. That COVID-19 allegory really comes full circle with the spread of the Phantoms in National City, which J’onn directly references as a, “Global pandemic”, with as much subtlety as a brick to the face. If there is an upside though, it’s the fact that Supergirl at least avoids the urge to drag out this allegory any longer, with this week’s episode seemingly putting the Phantom invasion of National City to bed, albeit at the expense of Kara still being indefinitely stuck in the Phantom Zone.

“Lost Souls” is yet another Supergirl episode that reaches an acceptable, but ultimately predictable gear, as the season does what it can to allow Team Supergirl to function without their eponymous leader. The show’s efforts to spotlight the supporting cast have been mixed at best, though Kara herself is still enjoying one of her better storylines in a while, despite being cut off from everyone else in the Phantom Zone. Even Kara sees a light at the end of the tunnel this week though, as Nyxly and Zor-El accompany her to the Anchor that supposedly serves as an exit back to Earth. Ironically, this occurs while Team Supergirl is debating prioritizing rescuing Kara, or stopping the escaped Prime Phantom.

The thing is though, this isn’t truly a debate. Alex even points out early on that Kara wouldn’t want lives to be sacrificed in the name of freeing her from the Phantom Zone just a little bit faster. Considering that the whole point of the Phantom Zone is that no one can die in it as well, Kara would logically be suffering, but also not in any kind of mortal danger. Despite that however, Lena brings in a very specific device that can use Kara’s DNA to track the Prime Phantom, or locate Kara in the Phantom Zone, but it can’t do both. Yeah, it’s pretty contrived. It’s also contrived that Lena, a certified genius, would even consider arguing with Alex that Kara should be prioritized over the captive people, who will be permanently lost when the Prime Phantom reaches maturity. Yeah, I guess the Phantoms in the Phantom Zone are babies in the Arrowverse? Somehow?

Either way, I will once again give credit where it’s due; The show doesn’t drag out this ridiculous disagreement between Alex and Lena, nor any disagreements between the rest of Team Supergirl for that matter. It is a little annoying that Supergirl has to force excuses to keep the plot on track nonetheless though. Even in the Phantom Zone, Nxyly’s magic suddenly doesn’t work when it comes to repairing the mirror that will take her, Kara and Zor-El out of their extra-dimensional prison. Uh, why? I feel like this is possibly a ploy to separate Kara from her father (this makes sense later), but either way, why would Nyxly pick this moment to reveal to Kara that she tricked her into abandoning her injured father (whom Nyxly herself injured by posing as an alien prisoner from Fort Rozz), when it would have made more sense to have Kara and Zor-El help Nyxly get to Earth, and then have Nyxly betray them? Sure, Kara and Zor-El are ultra-powerful Kryptonians, but Nyxly kind of trumps them, being a fifth-dimensional character with reality-warping magic, magic that Kryptonians are definitely very susceptible to! 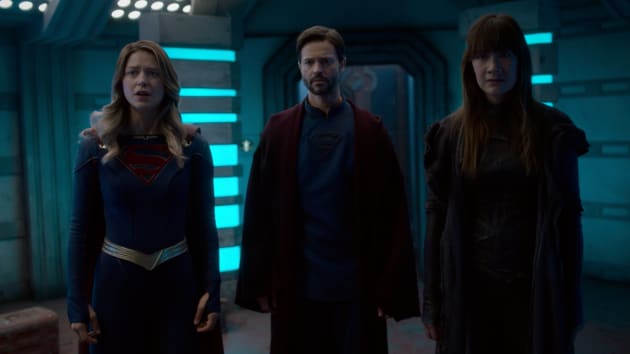 I suppose I buried the lede a bit though. The obvious, obvious lede. Yes, as any DC fan with a rudimentary understanding of the Superman Family’s villain history could tell you, Nyxly is bad, and is using Kara to wreak havoc on Earth, before finding another interdimensional path that will allow her to wreak havoc on her kingdom in the fifth dimension. It’s not terribly shocking, especially when it seems fairly obvious that Nyxly is meant to be a Mr. Mxyzptlk stand-in, in a series that has ironically already featured Mr. Mxyzptlk more than once. Regardless, the show does manage a couple of good story turns here, as Kara smashes the mirror that would have led her back to Earth, to prevent Nyxly from escaping and endangering the world, only for a self-destruct mechanism to then trigger during a scuffle, forcing Kara to retreat, with Nyxly and Zor-El supposedly being killed in the explosion. Yeah, I seriously doubt they’re dead. Nyxly probably teleported Zor-El somewhere else and is holding him hostage, likely as a bargaining chip through which to coerce Kara into finding another exit from the Phantom Zone.

Regardless of how that pans out though, there’s another decent climax had outside of the Phantom Zone, when Team Supergirl finally unites to attack the Prime Phantom Chrysalis, before the Phantom infection plague spreads out of control on Earth, and breaches beyond National City. Yeah, like I said, it’s pretty obvious that the show is taking inspiration from the COVID-19 pandemic with its new Phantom rules. In any case though, the climax on Earth has a nice, if short-lived horror vibe, as Team Supergirl’s various members are picked off and possessed by Phantoms in the sewers, leaving Dreamer to open a last desperate path to the Chrysalis for Alex, who uses Lena’s gizmo to save all of the Phantom Progeny, in turn allowing Team Supergirl to return and use their Ghostbusters-style Phantom Trap (once again, a TV show blatantly admitting that it stole something from a movie doesn’t change the fact that it lazily stole something from a movie!), to trap the Prime Phantom for good.

Sacrificing Kara in the short term to stop the Phantom plague is definitely the sensible solution, and it’s nice to see that Supergirl’s common sense won out here, especially when it came to ensuring that the Phantom plot didn’t overstay its welcome. This episode also delivers an interesting cliffhanger conclusion to boot, beyond Zor-El and Nyxly possibly being killed in that Anchor explosion, wherein Nia realizes through a dream that the only way to get more DNA from Kara is to travel to the past, when a teenage Kara burned out her powers at Midvale High. I’m not sure why making contact with teenage Kara is more efficient than making contact with adult Kara, following her Season 1 fight with Red Tornado that caused the same thing to happen, but I suppose we need some kind of distinct hook for next week. Speaking of distinct hooks, how exactly are Team Supergirl going to go back in time anyway? Are they going to have to beg The Flash? Or possibly hail the Legends?

The COVID-19 pandemic supposedly preventing earnest crossovers in the Arrowverse this season (sadly killing any hope for crossovers at all throughout the currently-airing final seasons of Supergirl and Black Lightning) likely indicates that Team Supergirl may have to find another solution that doesn’t involve other Arrowverse characters on screen. Either way though, a new villain revealed in Kara’s midst, and what’s likely a more light-hearted episode next week, should provide a good palate cleanser after so much Phantom angst. “Lost Souls” sees more contrivances than I would like, but Kara doing everything she can to spare the Earth from Nyxly’s wrath is a legitimately valid way to prolong her time in the Phantom Zone. I’m also happy to see that Alex and Lena aren’t in an over-the-top feud at this point, even though Lena initially wanting to doom numerous people on a global scale for the sake of rescuing Kara didn’t make sense to begin with.

I’m pleasantly surprised to see how well Supergirl is leveraging Kara being thrown into the Phantom Zone so far, and I hope that keeps up. The Team Supergirl arc isn’t quite as consistent, but hopefully everyone can come together under Kara again eventually, once Nyxly inevitably does become Earth-Prime’s next biggest threat later this season.

Supergirl 6.4: "Lost Souls" Review
Supergirl neatly ties up its Phantom plague storyline this week, albeit forcing a few contrivances in the process, while Kara discovers that Nyxly is not all she appears to be.
THE GOOD STUFF
THE NOT-SO-GOOD STUFF
2021-04-22
78%Overall Score
Reader Rating: (0 Votes)
0%