Well, it’s about time that the Pierce family finally felt like more active participants in Black Lightning’s more compelling narrative threads. The overlong ‘Book of Ruin’ story pod finally comes to a close this week, and with it comes the launching of Tobias’ endgame against the Pierce family. Before that harrowing climax begins to take effect however, “The Book of Ruin: Chapter Four: Lyding” still has to spend a bit more time having the Pierce’s try and stay one step ahead of Ishmael, who is increasingly determined to take them out in order to gain entry into the League of Assassins. I doubt we’ll see the League return in earnest, since their Arrowverse incarnation was primarily set up for the now-wrapped Arrow, but it’s nonetheless cool to imagine that the League of Assassins has once again become active in this world, following the creation of The CW’s new Earth-Prime universe in the wake of Crisis on Infinite Earths.

In any case, the Pierce family narrative sees a big improvement this week, like I said. It’s still not quite on the level of the villains’ storylines, especially when Jennifer’s arc in particular quickly gets overshadowed by the real problems facing the rest of her family, but at least everyone ends up in the same chilling place. Even Lynn ends up facing some truly terrifying consequences from Tobias’ latest campaign against Black Lightning’s crew, beginning with Lynn confiding in Dr. Bowlan that she’s begun to have nightmares about forcibly de-powering her family. Did Lynn somehow get clairvoyant powers after all of her metahuman gene tampering? Because it’s pretty amazing to see how right she ends up being!

So, yeah, Lynn’s dream is a bit of a contrived premonition, but I still have to respect the wind-up and execution behind the Pierce family’s latest tragic twist. Almost exactly as Lynn dreamt, Tobias is preparing a way to de-power the Pierce’s, exploiting Lynn’s research in order to effectively weaponize Val’s metahuman-dampening powers. As if that weren’t bad enough, Tobias, who appears to be actively manipulating the FBI investigation into Jefferson’s phony embezzlement accusations, also deposits the stolen funds into Lynn’s research, ironically fulfilling his promise to fund Lynn’s work, without mentioning where the money came from. Tobias’ financial treachery thus results in Lynn being fired and banned from her lab, and later arrested as a co-conspirator, leaving her completely unable to intervene in her family’s dire straits at the end of this episode. Ohh, damn! That’s a master stroke right there!

It’s truly amazing to see Tobias back and at the top of his game again, finally returning to his proper role as archenemy to the Pierce family, and the single greatest threat to Freeland. Tobias’ grand plan could have easily retreaded the similar Deathstroke storyline from Arrow’s second season, but the final touch of de-powering the Pierce’s is great. Better still is that all three of the Pierce family superheroes ultimately lose their powers at the worst possible time! Compounding this tragic irony is the fact that Anissa even receives a neat suit upgrade from Gambi slightly before this, one that hopefully saves her life after a car runs her over, since the new suit can retain Anissa’s heightened density for a short while after she exhales. 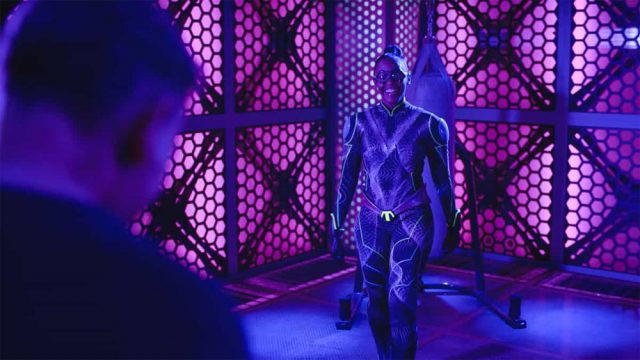 Jefferson and Jennifer, meanwhile, face their own challenging ordeals. Jefferson decides to single-handedly bait Ishmael into battle most notably, leaving him on the receiving end of Ishmael’s blades right as his electrokinetic powers vanish. Jennifer, meanwhile, happens to be fleeing Chief Lopez by flying high in the air at the same time, leading to her plummeting uncontrollably in the final seconds of this episode. Chief Lopez corners Lightning by posing as Uriah before this, following Jennifer posing as Lightning for a publicity stunt to try and save Garfield High’s failing music department, a supposed victim of Jefferson’s fake embezzlement. On this note, at least the Pierce family arguments, specifically those revolving around Jennifer’s publicity stunt, felt a little more valid and sensible this week, even if Lynn remains unlikable as ever toward Jefferson, namely when she inexplicably blames Jefferson for her lab being shut down. Uh, did Lynn forget that Jefferson is being framed, and that he’s another victim of Tobias? That was a weird scene.

Fortunately, another plus comes in this episode by way of Khalil properly returning to Freeland, after telling T.C. that he’s happy to assist the Pierce’s during their climactic battle against Tobias. We got another solid tease for Black Lightning’s potential spin-off, Painkiller here, when Khalil, as Painkiller, ultimately corners and interrogates Tobias’ money man. In the end, Painkiller kills the man, but Khalil nonetheless gets the information he needs. It’s exciting to make Khalil the one chance the Pierce family has to undo Tobias’ fake embezzlement plot, even if that’s probably cold comfort to all three Pierce family superheroes while they’re currently facing death! Regardless, this turn presents a decent chance to give Khalil his own shot at some form of redemption with the Pierce family, in case Painkiller doesn’t ultimately end up going to series. 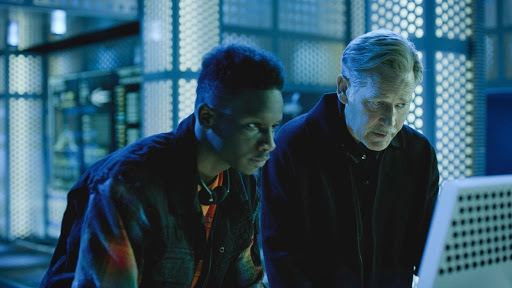 “The Book of Ruin: Chapter Four: Lyding” manages to end Black Lightning’s ‘Book of Ruin’ story pod on an especially satisfying note, finally moving the Pierce family storylines in a better, more engaging direction, even if Tobias continues to dominate this final season’s storytelling. Black Lightning hasn’t really delivered many good ideas for its core family of superheroes throughout most of this season, but that finally appears ready to change, ironically right when Tobias takes their powers away. Even T.C. is rendered powerless by whatever strange plot Tobias has going on, putting Black Lightning and his daughters at an especially serious disadvantage! Still, like I said, Black Lightning is starting to do better with its overall narrative focus, and that’s great news. Why? Because it will be May when the show airs its next episode, and May marks the last month that Black Lightning will be on the air.

We’re in the endgame now, as superhero media likes to say. With the entire Pierce family being seemingly incapacitated however, hopefully Khalil and/or Gambi can intervene somehow, lest the final battle for Freeland be lost before it even truly begins.