NOTE: Some spoilers from throughout the second season of, “Pennyworth” are present in this review

While DC and its massive, ever-growing television slate continues to develop across in-house WarnerMedia platforms, The CW and HBO Max, Pennyworth remains happy to exist as a bizarre, head-scratching anomaly. It’s currently the only mainline DC Universe-inspired series that’s not hosted on a WarnerMedia-owned platform in its native U.S. (Epix), and despite Pennyworth coming from the same creative team that brought us FOX’s legacy Batman prequel series, Gotham, it apparently bears no connection to that show, instead operating in an entirely different, 1960’s-inspired universe. Despite being the black sheep among DC’s current television slate however, Pennyworth appears to be thriving among its cult fanbase, proudly standing as the red-headed stepchild of current live-action DC media, to the point where it wasn’t even willing to delay Season 2 episodes that managed to be successfully produced before the COVID-19 pandemic temporarily halted production.

This awkward gap in Epix’s Pennyworth schedule, which became even more awkward when markets like our native Canada had to wait even longer for these Season 2 episodes to premiere internationally, was just one of several annoying quibbles with Pennyworth’s sophomore season, at least during its early stretch. Epix’s Batman-inspired prequel series did manage to right the ship later in Season 2, bringing its many plot threads together amid an exciting conflict that pushes the series forward in a hugely exciting way, should it be renewed for Season 3. Before that though, Pennyworth unfortunately struggles with its diminished novelty, resulting in its frequent structuring flaws and pacing issues becoming more apparent than they were during the first season, which in turn exacerbates the season’s COVID-19 delays due to how long it takes Season 2 to properly pull itself together. 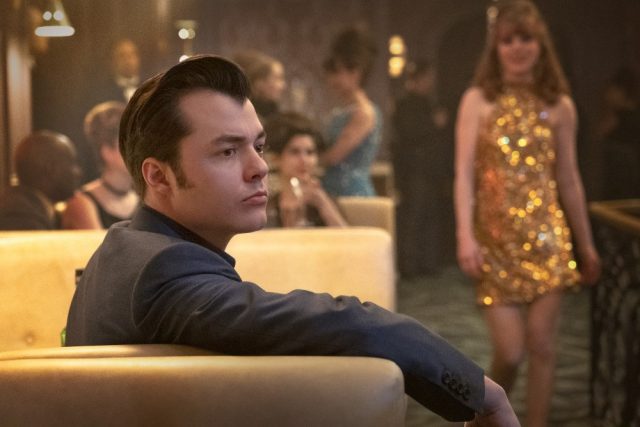 Thus, Season 2 of Pennyworth demands a fair bit of patience, even if its final result is legitimately awesome. A large part of this is due to the fact that the season doesn’t seem to know how to present the erupting war for England that’s currently engulfing the Pennyworth universe. There’s a lot of talking about the war for England, but we never actually see it, at least beyond some loose establishing shots here and there. Instead, London is conveniently made the last standing refuge of Pennyworth’s war-torn England, as the re-branded No Name League, now known as the English League, struggles to piece together a defense strategy against the all-powerful Raven Union, the souped-up, war-ready upgrade to Season 1’s Raven Society, which now has the full support of the British army.

Another persistent issue with Pennyworth’s early Season 2 episodes is their stubborn, fruitless story arcs that are doomed to go nowhere. Alfred particularly suffers on this note, dedicating the better part of Season 2 to raising money in an effort to flee to Gotham City in America. Okay, sure, we know that Alfred has to end up in Gotham eventually, but that’s just it; Alfred isn’t supposed to go to Gotham yet. There’s still a war going on in England, a war that Alfred will inevitably be pulled into, so viewers will know exactly how this story arc will pan out and conclude before it does so. Likewise, future Batman parents, Thomas and Martha spend most of this season arguing and pretending to hate each other, like some kind of bad 90’s romantic comedy. It quickly becomes tiresome, especially when we know that Thomas and Martha have to end up together, and indeed, they do. In fact, not only do they finally get married during the Season 2 finale, but they even have their first child, a baby girl, one that exists as probably the most concrete proof that Pennyworth doesn’t take place in the Gotham universe, where Bruce Wayne definitely didn’t have an older sister. 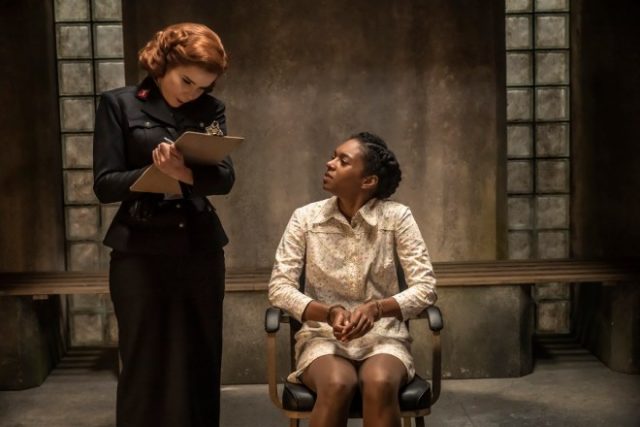 Fortunately, the prototype Batman Family’s Season 2 arcs weren’t a total loss in the end, thanks to the belated introduction of future Batman gadget expert, Lucius Fox. In the Pennyworth universe, Lucius is introduced as a mole within the Raven Union, one that bears witness to a horrific new weapon called Project Stormcloud, a literal ‘terror bomb’ that floods its target location with a gas that overwhelms people with a lethal dose of violent fear, leaving surrounding structures and spoils untouched and uncontaminated. Stormcloud appears to be a direct inspiration for future Batman villain, Scarecrow’s Fear Gas (although Stormcloud is never referred to as Fear Gas, and nor does it have any apparent connection to the Crane family at this point), but either way, Lucius being the gateway to Stormcloud works a lot better than Thomas’ and Martha’s tired bickering, or Alfred’s selfish, doomed quest to flee the country.

Another strange plus to Pennyworth’s sophomore season is how Stormcloud is ultimately incorporated into a major evolution of the show’s storytelling sensibilities, even if it’s a long, strange walk to get the proper payoff. You see, while trying to perform underhanded jobs in order to raise money for his pointless fleeing effort, Alfred begins an affair with the wife of his former SAS captain, Gulliver “Gully” Troy, a vaguely unhinged man that’s more or less a functioning sociopath. Long story short, Alfred is found out, resulting in Gully’s wife fleeing to America in Alfred’s stead, in turn leading to a brief confrontation between Alfred and Gully, before Gully later saves Alfred’s life during the race to stop Stormcloud. From here, Gully saves all of London by swallowing Stormcloud’s capsule, which, astonishingly, transforms him into a super-powered soldier, one that wields life-draining Stormcloud gas during the battle against Raven soldiers. Yes, in a bizarre, but admittedly cool twist, Gully’s and Alfred’s strange conflict ultimately leads to Gully becoming the Pennyworth universe’s first known metahuman! While Gully is not adapting a specific character from DC Comics lore, he nonetheless beautifully ratchets up the stakes for Pennyworth’s potential third season, as London’s resistance gains a fighting chance against the Raven’s, thanks to Gully’s new superpowers.

Before that unexpected turn however, Pennyworth largely remains within the realm of more grounded spies-and-soldiers conflicts that the show built its early foundations on, despite more recognizable comic book elements starting to gradually creep into its storytelling. Pennyworth still bears a very, very tenuous connection to the Batman Family mythology throughout Season 2, let alone the rest of the DC Universe, but at least it’s slowly leaning into becoming more of a comic book-flavoured show by the end of its second season. Even Alfred’s father, Arthur, who was believed to have died during Season 1’s climactic bombing attempt on The Queen, makes a surprise comeback late in Season 2, allowing the Pennyworth family to face a reckoning that shocks them to their core, before Arthur voluntarily deactivates his own life support and dies, after defecting in the eleventh hour, and telling Alfred where to find Stormcloud in London.

Speaking of the villains and anti-heroes that make up much of Pennyworth’s supporting cast, some of them similarly suffered from the excessively aimless early episodes of Pennyworth’s second season, but most, if not all managed some really great story turns in the season’s latter half. The exception here is Bet Sykes, who, despite being cut off from Alfred’s group for virtually the entire season (that’s lame!), has one of the best season arcs here, one that sees her beginning as an unfulfilled Raven Union interrogator, before she flees with an accused rebel prisoner, Katie, ultimately reconnects with her sister, Peggy, who now runs a sex shop in London, and eventually comes to try and defy her violent ways with Katie’s help. Bet and Katie even begin a romance with each other, a bold decision in the storytelling, but one that feels like it really works, especially when it leads to Katie seemingly accepting Bet’s vaguely sociopathic demeanour in the end, as the two join the resistance to fight for London at the conclusion of Season 2.

Another element of the storytelling that Pennyworth really excels at throughout Season 2 is how well the show maintains its ‘no one is safe’ narrative style. This could be part of the reason why Pennyworth barely features any recognizable Batman/DC characters so far, because it can’t kill off characters that will eventually have a significant connection to Batman’s origin. Regardless, Season 2 saw some wonderfully unexpected and impactful character deaths, following on from the unexpected deaths of Esme, the Thwaite’s and Arthur from last season, even if Arthur’s demise was temporarily reversed this season. The most shocking and dramatic death in Season 2 was certainly Bazza’s, who is unexpectedly killed after a botched mission to reclaim stolen funds from Alfred’s stash. This critically leaves Alfred and Dave Boy short-handed during the latter stretch of Season 2, despite the Raven Union seeing their own hefty loss, following an increasingly unstable Lord Harwood provoking turncoat Raven soldiers into shooting him dead, so that Bet and Peggy can escape a failed rescue mission.

Harwood’s death ultimately sets up another, more dangerous villain for the remainder of Season 2, that being Colonel John Salt. Salt exceptionally flexes Pennyworth’s often pitch dark sense of humour, being a comically violent antagonist that would give even Bet pause. In fact, it’s sort of sickly satisfying to see Bet beat down a defeated Salt late in the season, drawing some sort of crooked, but still palpable line regarding where Pennyworth’s heroic ideals are supposed to fall within its otherwise morally grey, dreary universe. It’s a bit of a shame that Salt is removed from power at the end of Season 2, but he isn’t killed, possibly indicating that he could return in a potential third season. Either way, Frances Gaunt seizing power at the Raven Union with the help of the show’s heroes, only to turn around and continue the invasion of London, is another delightfully dark turn to conclude Season 2 on, continuing to leave viewers guessing as to the allegiance and ultimate agenda of much of the supporting cast, which now has former villains like Bet and Gully seemingly set to become heroes in a potential Season 3, while the seemingly well-meaning Mrs. Gaunt is now re-positioned as an arch-villain.

Pennyworth somehow manages to recapture a ton of momentum at the end of its second season that it bled earlier within it, but that still means that the journey to its exciting Season 3 prospects can be too much of a slog. It too often feels like Pennyworth’s second season just doesn’t know what to do with its characters, while instead scrambling to set the stage for what promises to be a more engaging third season, albeit a third season that Epix still hasn’t yet ordered at the time of writing. It would really be a shame if Pennyworth was cancelled at this point, because the show clearly still has some good ideas that it means to explore. The series may still be largely disconnected from DC’s wider Batman Family mythology, but Pennyworth is nonetheless confidently carving out its own weird Elseworlds niche among DC’s current TV slate, expectations be damned. Even if it has almost no recognizable Batman/DC characters in it, I’m more curious than ever to see where the series goes next, especially now that metahumans have officially entered the fray.

Stay weird, Pennyworth. Now that you’ve finally found your focus, hopefully a third season gets announced sooner rather than later, or not at all.

Pennyworth: Season 2 Review
Pennyworth's second season is awkwardly structured and suffers from frequent pacing issues, but its exciting final developments are worth the wait, especially when the series is still succeeding as an appealingly unpredictable oddity among DC's current television lineup.
THE GOOD STUFF
THE NOT-SO-GOOD STUFF
2021-04-26
77%Overall Score
Reader Rating: (0 Votes)
0%