Alright, third time would be the charm for me to finally feel comfortable admitting that Batwoman might finally be pulling itself together after an especially rough sophomore season. After two surprisingly solid episodes beforehand, does the series manage the hat trick this week? Well, kind of. “I’ll Give You a Clue” is another mostly decent Batwoman episode, presenting another especially strong subplot for Alice, while also introducing another lesser-known Batman Family villain into the Arrowverse, Cluemaster. Cluemaster also presents an opportunity to bring in Stephanie Brown, the daughter of the aforementioned villain, and one of the many Gotham City vigilantes tied to the Batman Family in DC Comics lore, who has served as both the fourth Robin and the fourth Batgirl at varying points in DC Comics canon, as well as a more independent vigilante called ‘Spoiler’.

Obviously though, with this episode serving as the Arrowverse’s introduction to Arthur Brown/Cluemaster and Stephanie Brown, none of these exciting developments with Stephanie’s character have come to pass yet, especially while Robin and Batgirl don’t currently appear to exist in any form within the Arrowverse. This leaves, “I’ll Give You a Clue” to instead focus heavily on Sophie, who initially earned her rise through the Crows’ ranks by assisting in the capture of Cluemaster, thanks to a lucky tip that happened to come from Stephanie during Sophie’s first day as a Crows rookie. This is a very cool idea in concept, not only providing strong justification to bring Cluemaster into Batwoman in an interesting way, but also delivering a way to finally touch upon an elephant in the room, even by the standards of a CW show; Sophie is pretty damn young to be holding the high-ranking station that she does with the Crows.

Crafting an actual story arc that surrounds Sophie’s meteoric rise as a Crows wunderkind, one being based on a dishonest capture of Cluemaster, even if Sophie has more honestly tried to earn her station in the years since, is a great idea. Too bad this concept isn’t explored very well then, because this episode’s narrative inexplicably pivots to the animosity/sexual tension supposedly being shared between Sophie and Ryan, because God forbid Batwoman actually challenge its audience’s pre-conceived notions about one of its lead characters in earnest! Naturally, Sophie’s and Ryan’s immature squabbling is also catalyzed by the fact that Sophie knows Ryan is Batwoman, and wants her to admit it, which Ryan inevitably does, after she and Mary have finally become stuck in one of Cluemaster’s deadly traps. This is predictable and annoying, and once again, this issue is not helped by Ryan being written to be inexplicably immature toward Sophie and the Crows throughout this episode (she doesn’t have to like them, but she’s way too old to constantly be throwing a tantrum over their existence!), which doesn’t help the narrative, and only serves to create more childish drama for no reason.

Fortunately, this episode’s core storyline fares better when it focuses in on the introduction to Cluemaster and his daughter. Stephanie in particular feels like a fun character so far, after she’s initially liberated from an earlier ‘puzzle’ left by her father, at which point she strikes up an immediate connection with Luke, following Luke being called in to help decode a cipher drawn onto Stephanie’s skin. It previously felt like Mary was going to be positioned as Luke’s love interest, but I suppose after the two became the most steadfast allies in Team Batwoman, the writers probably felt that they were better off as friends. That’s fine, because Stephanie feels like a better love interest for Luke anyway, at least so far. Their relationship should get even better if Stephanie eventually embraces her vigilante identity, Spoiler as well, particularly when Stephanie is the one that almost takes her father down by knocking out Luke and solving Cluemaster’s final puzzle, only for Luke to rescue her from being gassed to death in a car in the end. I guess Stephanie still carries a few blind spots when it comes to her supposedly genius father. 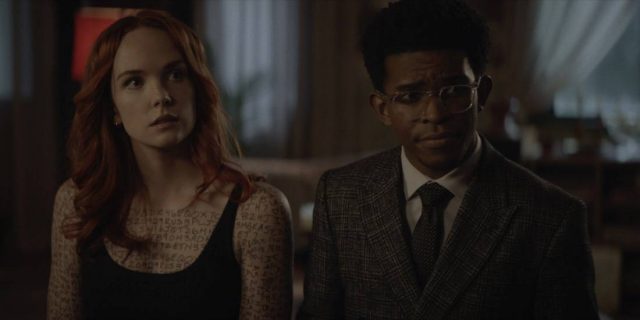 This theme of fathers and daughters also effectively comes into play with Jacob this week, who has now taken to wandering Gotham and taking Snakebite. Meanwhile, Alice has also been caught by Black Mask and, “Circe”, who, unbeknownst to Alice, is her thought-dead sister, Kate. Everything involving this subplot is pretty awesome too, between Black Mask trying to torture Alice into revealing the identity of Batwoman, and Alice desperately trying to resist, while also using her talent for psychological manipulation to get underneath the hypnotized Kate’s skin. This subplot is nicely unpredictable and even kind of heartbreaking, particularly after Alice initially gets free and attempts to call Jacob, only for Jacob to tell her she has the wrong number, on account of the fact that he’s high on Snakebite. Alice getting recaptured because she misplaced her one phone call to Jacob is very effectively dramatic, especially when this unfortunate turn once again forces Alice to rely on her twisted talents in order to survive.

Alice’s psychological manipulations thus quickly allow her to deduce that, “Circe” is Black Mask’s daughter, on account of inadvertent clues left by Kate and Black Mask himself. Apparently, Circe was trampled to death during last season’s Arkham Asylum breakout, which puts more compelling pieces into place regarding why Black Mask would blame Kate’s Batwoman for the death of his daughter. After correctly deducing that Black Mask is Roman Sionis to boot, Alice then promises to make Kate a new face, one that will complete her new appearance as Black Mask’s dead daughter, Circe. This of course is Batwoman’s surprisingly credible excuse to justify Kate’s recasting, as Alice unsurprisingly gives Kate the new face of Wallis Day, who is now officially taking over the Kate Kane role from Ruby Rose. At this point, Alice also realizes during the final seconds of this episode that, “Circe” is Kate. This is a fantastic cliffhanger tease for next week’s episode, as Alice gets thrown for another emotionally taxing loop, following the shocking discovery that her sister was alive all along. 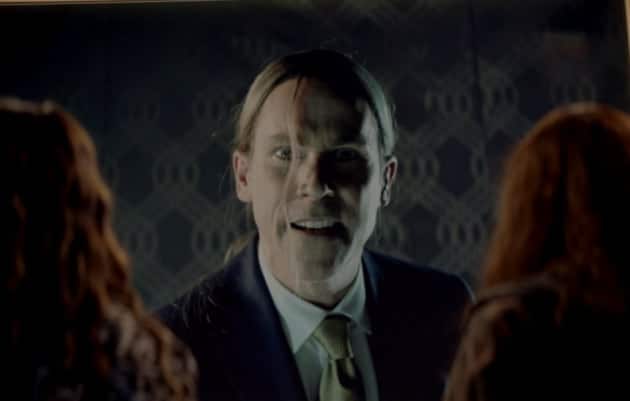 “I’ll Give You a Clue” unfortunately regresses Batwoman when it comes to Ryan’s writing, especially when this episode provides frustratingly little focus on Sophie’s early days with the Crows in the end. Even if the laboured path to Ryan and Sophie coming to an understanding feels tedious however, the rest of this week’s episode still manages to function pretty well. Cluemaster is a decent, if slightly corny villain-of-the-week, but even better is the entertaining, memorable introduction to his daughter, Stephanie, who could be a very important character on Batwoman going forward. Likewise, Alice’s intense capture by Black Mask makes for a superb subplot this week, running the gamut from heartbreak to surprising opportunity, and culminating in Kate Kane’s new face finally properly debuting on this show.

Despite some missteps this week, it does feel like Batwoman is finally starting to pull itself together in the late stretch of Season 2, even if, as I said before, it’s probably too little, too late at this point, considering the show’s rather lacklustre ratings. Well, at the very least, maybe this current uptick in quality means that we can get a more consistently enjoyable third season of Batwoman later this year or perhaps early next year, before The CW is inevitably forced to cut their losses.

Batwoman 2.13: "I'll Give You a Clue" Review
Batwoman debuts puzzle-themed villain, Cluemaster in an uneven, but still intriguing origin plot for Sophie this week, while Alice struggles to survive being tortured by Black Mask.
THE GOOD STUFF
THE NOT-SO-GOOD STUFF
2021-05-11
77%Overall Score
Reader Rating: (0 Votes)
0%