Ohhh, boy. This is going to be a tough one. As if Fear the Walking Dead’s otherwise standout sixth season didn’t get controversial enough after the series killed off fan-favourite Morgan ally, John Dorie during this past April’s midseason premiere, the show took another divisive turn in this week’s episode, one that’s probably going to leave a comparably sour taste in the mouth of many fans. “In Dreams” shifts the spotlight onto Grace this time, after she awakens in a dream-like state, and discovers that sixteen years have somehow passed. At this point, Morgan’s community is thriving, Grace’s familiar friends are living well (albeit significantly older), and an unconscious Grace even happens to be picked up by a teenage survivor named Athena, who somehow joined Morgan’s group in the time since Grace last remembers.

This is an interesting idea, though, “In Dreams” is a highly experimental episode that nonetheless can’t help tipping its hand at times. It’s immediately obvious for example that Athena is a manifestation of Grace’s unborn daughter, which somehow has to be spelled out to the audience after Grace is forced to accompany an aged Morgan and Athena outside of the community’s walls. All the while, Morgan’s voice, along with flashes of an explosion, can be heard and seen. It’s a bit much at times, plus it’s pretty disappointing in general that Fear the Walking Dead is feeling the need to treat viewers like they’re stupid here, and need to be spoonfed this ‘twist’ with Grace’s false reality. Obviously, Grace didn’t just fall asleep in the middle of a bunch of walkers for sixteen years. I think people can put together what’s going on, guys! 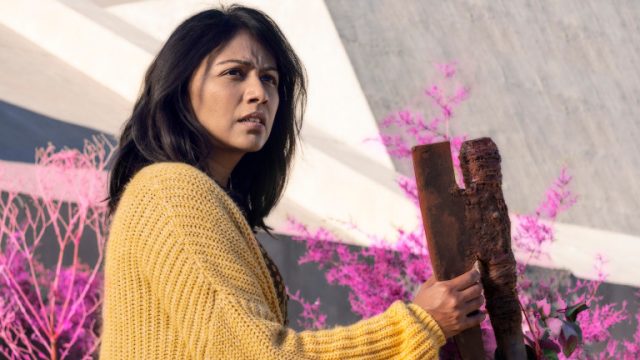 Regardless, Grace eventually pieces together that she’s dreaming, and that nothing she’s seeing is real. It was pretty cool to see older versions of the series’ familiar survivors during the early reaches of this dream as well, all living in a post-apocalyptic paradise as older, settled incarnations of themselves (even if the makeup crew didn’t seem to get around to Dwight and Sherry, since they practically look identical to the present day beyond having altered hairstyles), though that gimmick falls away pretty quickly. Even the dream’s older Morgan eventually just vanishes, leaving Grace and Athena to have tense interactions with each other, as Athena tries and fails to convince Grace to return to the survivor colony.

Meanwhile, in the real world, Morgan is frantically trying to awaken Grace while being besieged by walkers, and some of the Doomsday Cult members, who are led by Riley. Yeah, he’s back again. As it turns out, the Doomsday Cult had a very specific reason to seek out Morgan as well; Morgan currently holds one of the mysterious keys that AMC has been teasing in several places throughout their Walking Dead TV universe, one that supposedly, “Unlocks the future.” Morgan nonetheless tries to protect the key and bring Grace back to reality, but Grace instead confronts what she perceives as the inevitable; Getting some final moments with her unborn daughter during her dream, since Grace believes that she’s going to die soon. Before she does however, Athena must be born.

This feels like a beautiful, poignant exit for Grace’s character in concept, and the show even appears to execute this idea wonderfully. Despite Morgan stupidly killing off Riley’s entire crew, only to lazily allow Riley himself to get away for some reason (why?!), Grace nonetheless awakens, only to tell Morgan that she believes her radiation sickness is about to kill her. Sure enough, Riley also returns at this point, thanks purely to Morgan’s unbelievable stupidity, demanding that Morgan hand over his key in exchange for the lives of Grace and her baby. Yeah, when it comes down to it, this is another contrived, annoying tease for AMC’s upcoming Walking Dead movie that’s supposedly in development, and will, according to reports, supposedly address what the big deal is with these mysterious keys that have shown up on the flagship Walking Dead series too. Whatever. In any case, Riley leaves with the key, Morgan helps deliver Grace’s baby… And this is where things are going to be very upsetting and infuriating for a sizable subset of Fear the Walking Dead fans. 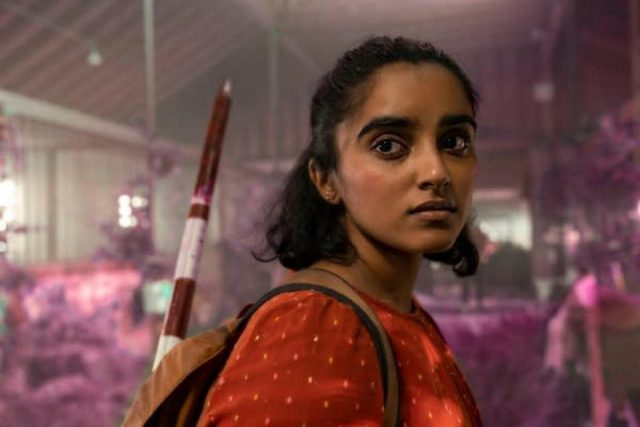 Put simply, Grace was wrong about the fact that she was supposedly dying. No, Grace lives, and is completely fine, even surviving childbirth, no problem. Instead, it’s Grace’s baby, Athena that dies here, ultimately being stillborn, and being the true person experiencing their final moments in Grace’s dream. Yes, Fear the Walking Dead went there, presenting a twist that even I’m struggling with, and I thought I was pretty immune to AMC’s Walking Dead TV universe melodrama by this point! On the one hand, the show did do a good job of going against viewer expectations here, essentially taking the unexpected twist of John’s death from the midseason premiere, where he tragically died immediately after finally deciding that he wanted to live again, and reversing it. Ironically, right when Grace feels she’s ready to die, she nonetheless ends up living, and instead, it’s her baby that dies. It’s almost like a cruel joke.

But that’s just it– This stillbirth twist doesn’t feel tastefully dramatic. It feels downright cruel. I almost have to wonder if this is a point for Fear the Walking Dead that will mimic Negan’s controversial introduction from the flagship Walking Dead series. That introduction pushed the limits of taste and violent exploitation perhaps too far, and thus permanently put off a huge chunk of The Walking Dead’s former audience in the process, almost directly leading to that show’s steep ratings decline over the past few seasons. Fear the Walking Dead has never had anywhere near the colossal audience that The Walking Dead once enjoyed with its first-time airings, but even so, Grace losing her baby will still no doubt get under the skin of a lot of fans. At worst, it’s an uncomfortable, lazy way to write Grace’s pregnancy out of the show, possibly because the writers didn’t actually have a plan for Grace’s baby as a character in her own right. This, much like Negan’s divisive debut on the main Walking Dead series, reeks of exploitation, since it renders Grace’s entire pregnancy pointless. In fact, it’s actually worse if Grace having a stillbirth was the writers’ plan from the get-go, since that officially means that Grace’s pregnancy was purely exploited as a cheap plot device throughout this season, one that was never going to have anything but a bitter, cold payoff. 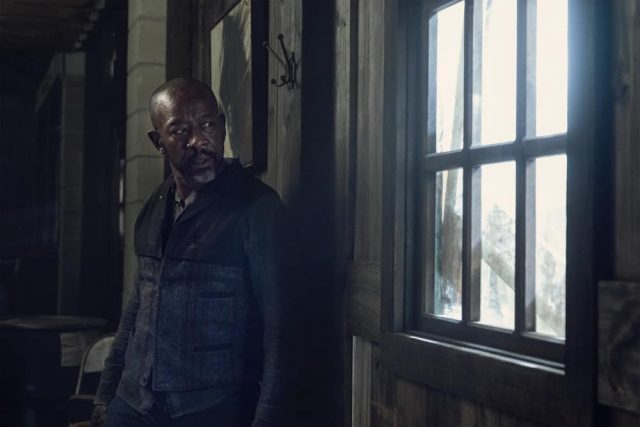 So, no, I’m not crazy about how this stillbirth twist was executed. Some may like it, mind you, and I do at least have to give credit to the narrative for once again trying not to do the predictable thing, and not caring if fans are unhappy with the unexpected result. Despite that though, “In Dreams” may be a step too far for Fear the Walking Dead’s current darker direction. This episode felt like an overly contrived way to rob Morgan of his seemingly important key, and remove Grace’s pregnancy because the plot likely didn’t know where to go with it once her baby was born. That’s not only needlessly cruel, it’s also downright lame. I may respect the fact that Fear the Walking Dead wasn’t afraid to experiment here, but I don’t know if the result was really worth it, especially when Morgan’s group doesn’t currently seem to have a believable conflict with Teddy’s Doomsday Cult.