Legends of Tomorrow stumbled over a bit of an awkward start to Season 6 last week, one that immediately thrust the show into an alien plotline that clearly needed a bit more fleshing out, especially after the Legends’ leader ended up being forcibly separated from her team. Fortunately, “Meat: The Legends” is a noticeable improvement, delivering more of the reliable wackiness that Legends of Tomorrow most excels at, even if Sara and Gary continue to be overshadowed by the Legends’ core plotting. Sara and Gary do at least find themselves on the trail of their own mystery though, even if disappointingly little is ultimately done with it for now, beyond an apparent setup for next week’s episode.

So, with aliens displaced all across the time stream, and the Legends no closer to locating the missing Sara and Gary, Ava tries to rally the team to look for leads on Sara’s location through anomalies now created in history. The team gets a quick hit as well, in 1955, when the entire town of San Bernardino, California is mysteriously killed during a zombie-like massacre. Upon landing however, all the Legends find is a hip new burger joint called Big Bang Burger, despite Spooner’s alien implant indicating that an alien presence is indeed nearby. 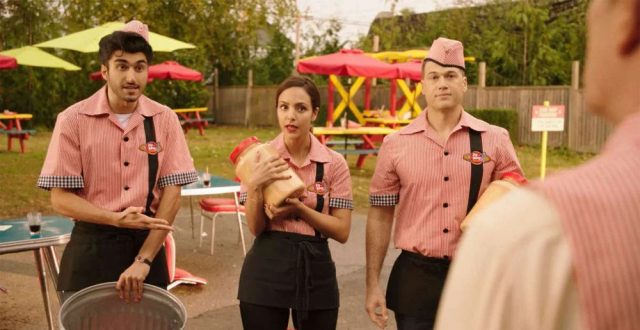 On the note of Spooner, the show continues to develop her character here, and her place among the Legends is starting to better come into focus at this point, particularly her growing trust in Ava. Spooner’s ability to detect aliens is immediately useful, but still finely balanced, because she can’t directly communicate with aliens, only sense them. It was also satisfying to see Spooner deliver the killing blow to the alien-of-the-week here, one that leads to a creative, entertaining conflict that’s nonetheless surprisingly believable for the time period. This seemingly suggests that Legends of Tomorrow is no longer going to struggle with properly developing its new history-spanning alien epidemic, and that’s great news, because this show often represents the height of Arrowverse creativity.

In an interesting and genuinely amusing mystery, the town of San Bernardino has started to uncontrollably crave the unique recipe of Big Bang Burger, leading to Nate, Behrad and Zari all taking up jobs there, while Ava, Constantine and Spooner go to investigate the home of the burger joint’s owner. Behrad quickly ends up reveling in his nostalgic return to burger-flipping as well, which he supposedly embraced as one of the finest burger chefs in his area growing up. This idea is not only funny, but it also effectively lends itself to a sweet subplot between Behrad and Zari, when Behrad eventually confides in Zari that his burger-flipping job gave him something that finally separated him from the shadow of, “Dragon Girl.” Not only is it satisfying to see Behrad and Zari cutely bond as siblings in this episode, but it even leads to an effective new advantage for the team, as Zari 1.0, who is quite literally living in the Wind Totem, eventually gets exasperated at the Tarazi siblings, and simply splits the Wind Totem in two so they’ll stop trying to share it. This gives Behrad and Zari alike their own wind powers, creating even more magic wielders for the Legends’ ranks, something that should be handy in the weeks ahead! 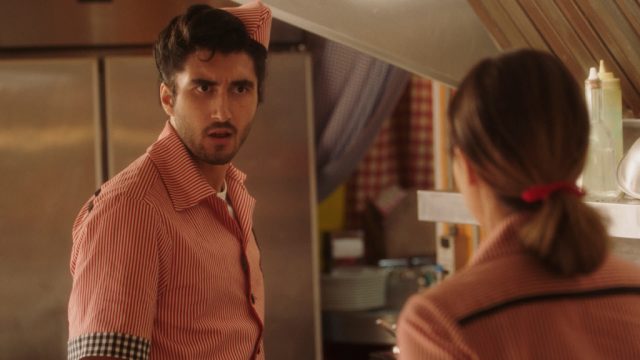 In any case, what’s the secret behind Big Bang Burger’s out-of-control meat rush? Well, an alien chrysalis crashed into the house of the burger joint owner, and after his wife discovered that the goo from the chrysalis makes people irrationally crave meat, she fashioned it into a secret sauce that led to Big Bang Burger’s business booming. The problem is, people’s evolving meat cravings eventually turn them into ravenous, horde-like zombies, putting a very entertaining new spin on the otherwise overdone zombie foundation that Legends of Tomorrow has already run into the ground by this point.

Fortunately, Zari’s secret herbs help to put the meat-addicted citizens to sleep, allowing Spooner to take out the alien moth that caused the meat cravings. Since the Big Bang Burger owners were devoured by the moth however, the former head waitress takes over the business and rebrands it, reopening Big Bang Burger as Big Belly Burger, the fictional fast food joint from DC Comics lore that’s popped up many times across the various Arrowverse shows. I have to admit, that’s a genuinely clever final result for such a delightfully weird storyline, even if it still leaves the Legends no closer to finding Sara.

Speaking of Sara, her subplot is the only point of this episode that feels less satisfying, because, like I said, it’s more or less a filler plot. Sara and Gary end up crash-landing on a mysterious planet, at which point they discover a dog wandering around the potentially hostile landscape. Upon following the dog, they then unexpectedly encounter Amelia Earhart, who gives them temporary lodging. Once Sara discovers that Amelia is acting suspiciously and repeating herself however, she ends up being attacked, seemingly indicating that Amelia has been possessed by an alien! Sara and Gary do end up managing to neutralize Amelia and escape, but that’s moot in the end, since they’re ultimately cornered by another mysterious party holding flashlights anyway. Are these more aliens? That’s probably the most reasonable prediction, but either way, Sara and Gary didn’t really have anything useful to do this week regardless. 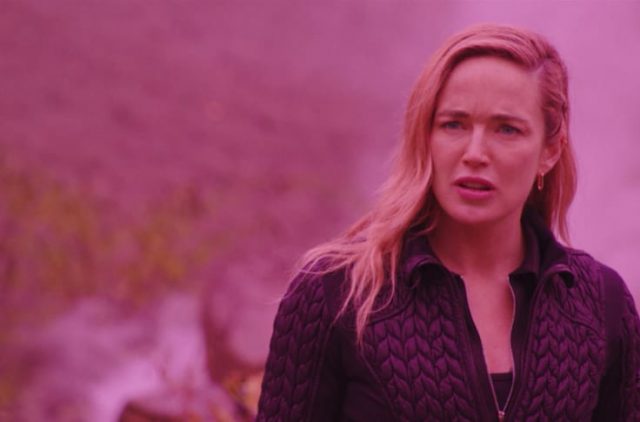 Sure, the Legends didn’t get any closer to finding their lost leader just the same, but at least they excelled within a core storyline that exceptionally balances comedy, mystery and character development. “Meat: The Legends” returns Legends of Tomorrow to a kooky high note, even if it’s unfortunate that the series couldn’t extend that same weird appeal to this week’s Sara/Gary subplot. Regardless, Spooner more effectively found her niche among the Legends this week, while Behrad and Zari enjoyed their own forward movement, after Zari 1.0 allows them to both wield the Wind Totem simultaneously. These positive developments are good, because the timeline’s alien problem is only just beginning. Worse still is that Sara and Gary are no doubt going to be at the mercy of the mysterious group that’s now found them. In that case however, hopefully Sara and Gary can finally start enjoying their own entertaining plotline next week.

Legends of Tomorrow 6.2: "Meat: The Legends" Review
Legends of Tomorrow regains its stride with a delightfully wacky new Legends mission this week, as the team travels to 1955 in order to investigate a burger joint-motivated massacre.
THE GOOD STUFF
THE NOT-SO-GOOD STUFF
2021-05-10
87%Overall Score
Reader Rating: (0 Votes)
0%