NOTE: Some spoilers from throughout the debut season of, “Invincible” are present in this review

Amazon may not have the enormous stable of superhero franchise characters at the disposal of Marvel or DC, but Amazon Prime Video has nonetheless made a huge splash in modern pop culture with its mega-hit superhero dramedy series, The Boys. With that series now developing a third season, alongside a spin-off, it’s no wonder that Amazon would want to double down on its niche of hard R-rated, satire-flavoured superhero comic book adaptations as well. Thanks to The Walking Dead franchise creator, Robert Kirkman and his company, Skybound, that chance has now arrived as well, via Kirkman’s own hard R-rated superhero franchise, Invincible!

Despite a live-action movie adaptation of Invincible remaining alive at Universal in some form, according to Kirkman himself at the start of 2021, Invincible nonetheless quickly separates itself from The Boys through its bold decision to be presented as an adult animated series for Amazon Prime Video, rather than a live-action series. While this may not be to everyone’s tastes, especially when The Boys already thrives as a live-action TV adaptation with all of the squeamish gore and over-the-top violence from its source comics completely intact, Invincible’s TV adaptation choosing the route of animation still carries its own unique advantages. The show can more universally mimic the look and feel of its source comics, for starters, not to mention that the wonderfully crafted animation manages to beautifully complement Invincible’s own satirical edge, exaggerating what it needs to, while still feeling like it’s grounded in some semblance of harsh reality. 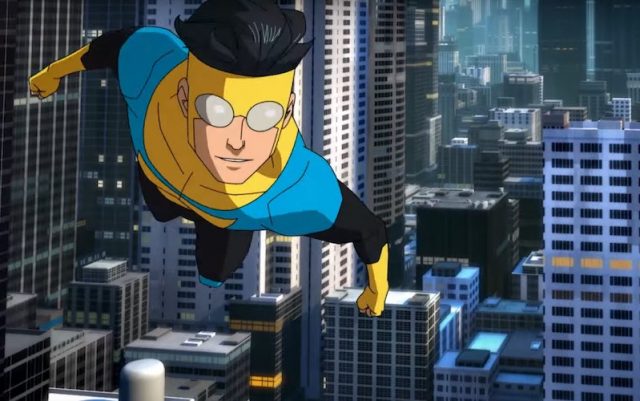 As with The Boys, Invincible aims to be a satire of power, and the misuse of power. Whereas The Boys views these themes through a celebrity-flavoured lens however, Invincible instead takes a more intimate approach, framing its own themes through the perspective of an outwardly ordinary family, and a semi-recognizable coming-of-age story. Said coming-of-age story revolves around Mark Grayson, voiced by The Walking Dead’s Steven Yeun, who, unbeknownst to the rest of the world, is the teenage son of Earth’s most powerful superhero, Omni-Man, voiced by J.K. Simmons. Omni-Man is celebrated and beloved across the world, being a Superman-esque hero that provides assistance to the Guardians of the Globe, the world’s other most powerful and celebrated superheroes, who exist as an analogue to DC’s flagship Justice League team for the Invincible universe. On paper, it seems like Invincible will thus hit a lot of familiar beats as far as a superhero origin/coming-of-age story goes… But that notion is quickly dispelled at the end of its first episode, when Omni-Man brutally murders all of the Guardians of the Globe in cold blood, for reasons unknown!

These events best exemplify what’s immediately appealing about Invincible; How this shocking, horrific act by Omni-Man creates a snowball of occurrences that constantly examine, satirize and caution about the dangerous potential of unchecked power. This theme constantly rings true throughout Mark’s own oblivious origins, as he tries to find his feet as a superhero-in-training. Unlike Mark however, who doesn’t discover his father’s true violent nature until the season finale, the audience always knows the worst case of what Mark is capable of if he doesn’t follow the right path, despite Mark himself almost cutely struggling with some downright tired superhero tropes. His double identity forces him to keep secrets from his friends and girlfriend, he has trouble keeping on top of his studies, and, at best, Mark seems disengaged with the world around him, which suddenly feels oppressively ordinary whenever he’s out of his costume as fledgling superhero, Invincible.

Despite the danger of Mark and his alien heritage however, spawning from a Krypton-esque planet called Viltrum, whose citizens can fly, exhibit super-strength and are practically invulnerable to almost any means of attack, the many threats in Invincible’s world nonetheless merit a powerful response. A new Guardians of the Globe roster, largely salvaged from the remains of an adolescent superhero force called the ‘Teen Team’, obviously loosely inspired by DC’s Teen Titans, tries to pick up the pieces from where their murdered superhero forerunners left off, but even within their ranks, treachery stirs. This comes by way of Robot, an artificial person voiced by Zachary Quinto, who falls for a new member of the team, Monster Girl, and thus tries to conscript a duo of super-villains called the Mauler Twins into building him a new human body. It seems innocent enough at first, but much like Omni-Man, Robot’s virtually unlimited genius and technological potential also threatens to spell trouble for the world at large, presenting its own danger that’s actively poised to keep growing over the next two seasons that Amazon has already ordered for Invincible.

There are no shortage of villains to face as well, both pulled directly from the Invincible comic books, and in some cases, made up entirely for this animated TV adaptation. Surprisingly though, the villains almost feel like deliberate, borderline cute distractions for the heroes, whose truly dangerous obstacles are often in their own midst. The only threats that usually give the superheroes, particularly Mark, a real challenge, are aliens, with Invincible featuring some really clever alien plots throughout its first season, one of which, involving a confused alien bureaucrat called Allen the Alien, voiced by co-executive producer, Seth Rogen (retaining his leading producer role from Amazon’s The Boys alongside co-executive producer, Evan Goldberg), is a particularly memorable standout. Invincible offers an incredibly big universe, and clearly, the influence and infamy of the Viltrumite race is very well-known throughout it. Hell, Mark’s own alien heritage seems to only exacerbate some of these alien issues at times, despite his earnest desire to want to help. 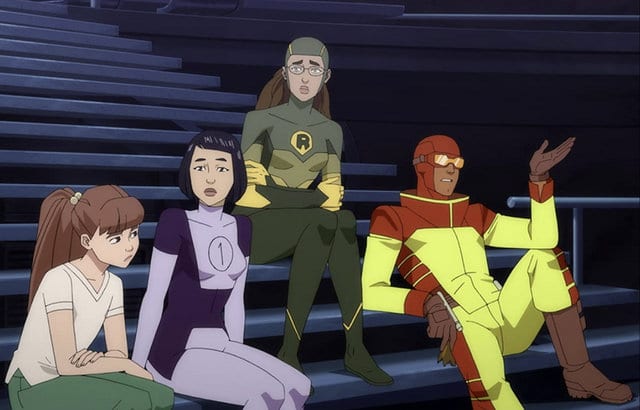 At worst in fact, Mark’s optimism feels all but useless during this first season of Invincible. Good intentions don’t save Mark from being violently beaten, nearly to death, more than once, nor being unable to prevent civilian casualties, of which this season is full of! Invincible does a fantastic job of illustrating throughout its first season that power is unflinching, uncontrollable and indiscriminate. By its very nature, it’s meant to conquer and destroy, eliminating anything lesser that would stand in its path. In this respect, it’s kind of ironic that Amazon put Invincible directly up against Marvel Studios’ The Falcon and the Winter Soldier on Disney+, another series that deals heavily with the dangers and misuse of power within a superhero universe. Fortunately for Invincible however, even going toe-to-toe with the juggernaut Marvel Cinematic Universe and a popular competing streaming service doesn’t seem to have hurt its success at all, since, as I mentioned, Amazon has already renewed Invincible for two more seasons.

There’s lots to love about Invincible’s debut season too, making its double-sized renewal both satisfying and vaguely unsurprising. This series is excellently animated, packed with quality satire and themes, and, even if it’s taking a bit of a cheeky approach to established superhero tropes, its action sequences are nonetheless pretty awesome in their own right! That said however, there are some caveats of note that sometimes ding Invincible’s first season when compared to The Boys especially. Chief among these is the fact that the show’s early episodes especially sometimes have trouble maintaining a consistent tone. The storytelling can sometimes range wildly between being a grounded family drama, being a more by-the-book superhero origin series, or being an over-the-top comedy, without much cohesion between these styles. The end of the season sees everything come together with an effectively brilliant result, but before that point, Invincible, much like its eponymous protagonist, sometimes feels like it’s struggling too much with exactly what it wants to be. 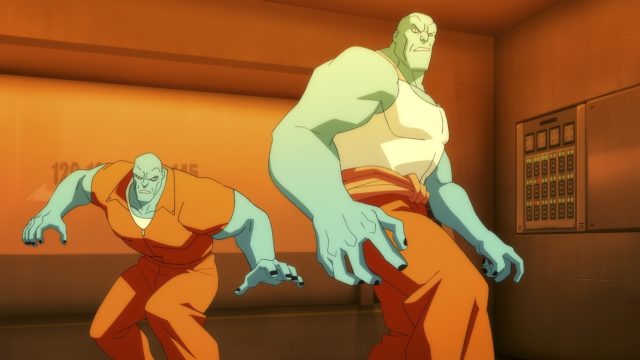 Another occasional issue is that some storylines in this series’ debut season just don’t feel like they keep pace with the others. This is somewhat exacerbated by Invincible being released weekly as well, much like the sophomore season of The Boys, rather than debuting its first season all at once. In some respects, Invincible having a full binge distribution model may have been more appropriate in the end, especially considering the stiff (if ultimately benign) competition from The Falcon and the Winter Soldier, which also trickled out individual episodes weekly on Disney+. Regardless, the entire season is available to binge on Amazon Prime Video now, and that helps less successful storylines such as Mark’s increasingly tiresome relationship with his rather harsh girlfriend, Amber, or Mark’s first superhero friend, Atom Eve trying to find herself after her breakup with fellow Teen Team alum, Rex Splode, feel a bit less annoying to sit through. Yeah, Invincible just doesn’t seem to deliver adolescent relationship storylines very well at this point, with Mark’s homosexual best friend, William also getting short-changed here, thanks to his own romance storyline being cut unceremoniously short, and ultimately being used as a backdoor origin for an important group of killer cyborgs. Seriously.

Invincible’s family dynamic within the Grayson household is consistently excellent though, by contrast. This is where the show’s heart really tends to beat. The series begins with the Grayson’s living a seemingly perfect suburban life as well, complete with Mark’s mother, Debbie actively embracing her husband, Nolan’s secret identity as Omni-Man. Even with Invincible’s first season being merely spread across eight episodes however (which, unlike many animated shows, each refreshingly range around 45 minutes in length!), the show still presents a brilliant strain on, and eventual implosion of, Nolan’s and Debbie’s relationship. Predictably, Debbie’s suspicions and eventual discovery of Nolan’s mass murder of the former Guardians of the Globe is what does the marriage in, but even that feels like small potatoes by the season finale, where Omni-Man’s agenda is revealed to be far more sinister and oppressive than even Mark could have ever imagined!

Invincible’s first season suffers from some tonal and narrative hiccups at times, plus some of the show’s storylines noticeably falter compared to others. Taken as an overall package though, Invincible’s outstanding polish and stark themes of how power can both enrich and undo us punctuate another great superhero series for Amazon Prime Video. Its excellent season finale in particular seemingly cements that Invincible is only going to get better from here, ratcheting up the scope of an already rich, engaging world that’s packed with its own long history of superheroes and super-villains. Even better however is how Invincible leverages its gut-wrenching emotional haymakers and astonishingly bloody violence to exemplify just how thin the line between good and evil can truly be in a world full of men and women that exhibit god-like abilities. Mark Grayson may be entering this world with the best of intentions, but even he must face a long road to properly understanding and respecting what he can truly do, especially after his father quickly grew to realize that those with true power aren’t often bound by the principles of the lesser.