Warning: This book deals with mature themes that may be triggers for certain folks.

When Mirrorland first appeared on NetGalley, it caught my attention right away. A lot of it had to do with the title, but the intriguing cover art featuring a woman’s mirrored face helped too. That led to some investigation, then a request, and an eventual approval. However, due to being unwell and having a lot on my plate, I didn’t get to the early ePub version of this novel. Instead, I started reading it when the publisher offered to send me a finished retail copy.

Written by a lady named Carole Johnstone, Mirrorland is a thriller/mystery set in Scotland. It centres upon a young woman named Catriona (Cat), who’s in her early thirties. She happens to be one half of a set of mirror twins, which are incredibly rare. The other half is named El (or Ellice), and she’s the reason why Cat has returned to her hometown and home country after living abroad in sunny California for 12 years. You see, something has happened to El, and she’s thought to be dead. Our protagonist isn’t willing to believe this, though, because she didn’t feel anything like she used to when her twin got hurt.

Unlike a lot of the books I’ve read as of late, this one is told through just one perspective, which is honestly kind of nice. Cat narrates the story in first-person, but also talks about the past a lot. Thus, much of the book is about the girls’ childhood, as they grew up in a rather big and lavish home that was full of imagination. Their mother wasn’t one for TV, nor was their grandfather, so the girls were subjected to a lot of reading, both by themselves and with their mother. Their way of creating fun for themselves, then, involved making up scenarios that could be played in an alleyway underneath part of the house. It’s this part of the home that gives the book its title, because Mirrorland is the make believe realm in which the twins acted as pirates, cowboys and clowns. There, they had a host of imaginary friends, including a girl named Mouse who they confessed all of their secrets to.

Each of the home’s bedrooms also had its own nickname and theme, apart from the grandfather’s room since the girls weren’t allowed in there. One was the Clown Cafe, where they’d pretend to socialize and eat/drink with clowns, and another was called the Kakadu Jungle because of its wallpaper. As I said above, there was a lot of make believe in their lives, and for obvious reasons. 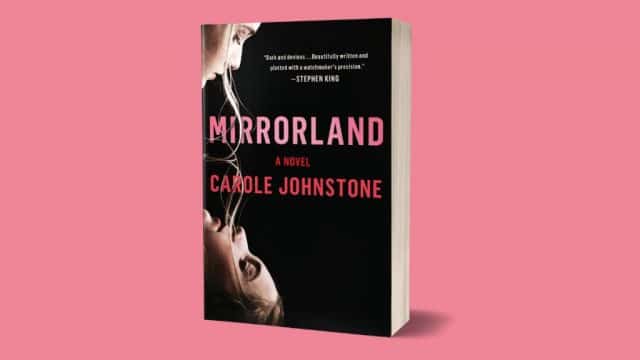 Early on, Cat hints at characters she and her sister were afraid of, including the Witch, Bluebeard the pirate, Blackbeard and the Tooth Fairy. They were raised to run from such dangers, or taught themselves to, and would use Mirrorland as an escape. This is a really interesting premise and idea, but it doesn’t always work as well as it sounds. Why? Because it can sometimes be hard to differentiate between what’s real and what’s not, and the book will jump from the present to the past and back within one chapter.

Caught in this mystery surrounding El’s nautical disappearance — which occurred on her personal sailboat during what seemed to be a routine trip to Inchkeith — is her husband, Ross, whom both of the sisters know quite well. Then there are the detectives, who are pretty well fleshed out. All want to figure out what each person knows, and try to get to the bottom of it. That is, whether Ellice is alive or deceased, and how it happened.

For the most part, this is a pretty interesting and unique read. It does feature certain thriller tropes, but it handles them pretty well and manages to be somewhat different due to all of the imaginary content. I will say that some parts were predictable, though, including the ending. I also didn’t really start to get into or enjoy the book until I was maybe 30-40% through, as things took a while to build up and get good. The beginning was a lot, and was kind of confusing. It’s worth reading until the end though!

Carole Johnstone’s writing is quite good. There weren’t any major or noticeable issues, and both the spelling and grammar were of quality. The only real issue is how confusing some of the content can be; from the imaginary cast of characters and named rooms to all of the things that took place in Mirrorland. That plus how often the story jumps from past to present and vice versa without much warning.

At the end of the day, Mirrorland by Carole Johnstone is a solid and above average read for fans of the thriller genre. It’s not the most original tale, but some of its ideas certainly are pretty unique. The writing is good, the characters have depth and it makes you think.

This review is based on a copy of the book that we were provided with by its publisher. Thank you to Simon and Schuster Canada, as well as NetGalley.