The Arrowverse is officially saying goodbye to a second DC series. Black Lightning has officially reached the end of this run this week, and that leaves the show to try and salvage a noticeably troubled, compromised final season, one that was clearly hacked to pieces by a combination of COVID-19 complications and rampant budget cuts from The CW. This was constantly apparent from the fact that the network didn’t even bother to make promos or release many press images for most of Black Lightning’s final season, potentially indicating that The CW was eager to wash their hands of the series as soon as they could. Worse still is that The CW has also officially passed on Black Lightning’s proposed spin-off, Painkiller, which showrunner, Salim Akil has also confirmed is not being shopped to HBO Max, nor anywhere else. Thus, this series finale truly is the wholesale end of the line for the Arrowverse’s Black Lightning mythos, at least in its dedicated form.

The good news however is that the Black Lightning characters achieve a less strict conclusion here compared to many of Arrow’s legacy heroes. Jefferson most notably lives to fight another day, despite Tobias boasting about killing him at the end of the previous episode. Indeed, actor, Cress Williams has already confirmed that he’s been approached by the crew of The Flash to potentially guest star in one of the early episodes of that show’s upcoming eighth season. This definitively indicates that, while Black Lightning is over, the actual Black Lightning characters will still have the ability to show up in future Arrowverse projects, even after The CW killed would-be spin-off, Painkiller in the crib. 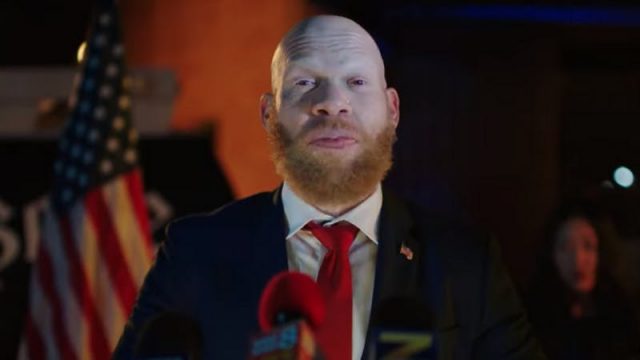 This also helps to ease the fact that, “The Book of Resurrection: Chapter Two: Closure” is ultimately a bit of an uneven series finale for Black Lightning, a predictable casualty of an entire final season that just faced too many hurdles during development. Showrunner, Salim Akil confirmed that Black Lightning’s originally planned ending was changed to boot, multiple times even, further indicating that this show probably ran for one season too long, following its much more satisfying and conclusive Season 3 finale last year. Again, at least the ending that this series did present offers a much more open-ended conclusion than Arrow got last year, but by the same token, it’s difficult to examine several significant developments in Black Lightning’s series finale, because, for the most part, there aren’t many meaningful ones.

Fortunately, there are a couple of exceptions on this note. Jefferson, finally, gets a legitimately solid story arc in this finale for starters, something that he’s been starved for all season! After Tobias buries him and leaves him for dead, Jefferson has to confront memories of both Alvin and Gambi, who respectively help Jefferson make his peace with having to kill Tobias. Apparently, the first time Jefferson took a life during an early battle with The 100, he was immensely bothered by it, motivating Gambi to help Jefferson formulate his superhero code. Likewise, Alvin helps Jefferson forgive himself for being unable to save his late father from Tobias, which eventually leads to Jefferson being able to rise again, once Tobias’ emitter is predictably destroyed.

The destruction of Tobias’ emitter unfolds across one of two major action set pieces in this finale. It’s overall an alright sequence too, giving Gambi one last chance to flex his lethal spy skills, as he assists Anissa and Grace in the destruction of the emitter in West Freeland. Yeah, apparently there’s a West Freeland too, but no time to dwell on this! After a surprisingly ruthless battle against Tobias’ soldiers, Gambi finally blows the emitter to pieces (I would wonder if Lauren is okay with this, but she’s weirdly absent in this finale), at which point Anissa and Grace can easily take out the rest of Tobias’ forces with their restored metahuman powers.

Jefferson regaining his powers at this point also allows him to clarify to his family that he is in fact alive, bursting out of his would-be grave for one last confrontation with Tobias. Jefferson’s and Tobias’ brutal hand-to-hand fight is definitely a highlight scene in this finale as well, even if Tobias is strangely not shock-proof anymore? Huh? Did the show forget about Tobias somehow finding a way to become immune to Jefferson’s powers? Oh well, who cares, because this scene is still great, giving Black Lightning’s final season another much-needed highlight action scene, before Jefferson finally blasts Tobias out of a window, at which point he’s conveniently impaled on a spiked statue. Again, despite Tobias seemingly being shock-proof beforehand, Jefferson ultimately electrocutes him to death after Tobias refuses to back down, finally putting an end to Freeland’s most dangerous crime lord. The death of Tobias also finally allows Jefferson to resolve his demons for good, at which point he’s comfortable passing the torch on to his daughters, Grace and T.C.

This is a surprisingly understated, but no less fitting resolution for Jefferson’s overall character in the Arrowverse. He simply hangs up his hat, trusts the new generation of superheroes to protect Freeland, and announces that he’s re-marrying Lynn, a development that’s long overdue. Likewise, Gambi also retires for good at this point, leaving T.C. to take up his mantle as the Freeland superheroes’ tech support. This isn’t a particularly flashy ending for Freeland’s legacy protectors, but like I said, it fits. It also avoids retreading the Arrow finale to boot, which ended with its lead hero remaining dead, and Team Arrow as a whole disbanding. Like I said as well, just because Jefferson is retiring as Freeland’s flagship superhero doesn’t mean that he lost his powers, or is unwilling to assist other heroes in the future. Cress Williams’ comments to the press have already assured us that Jefferson will still have some small guest role to play in the Arrowverse every so often, even if it will no doubt be outside of Freeland. 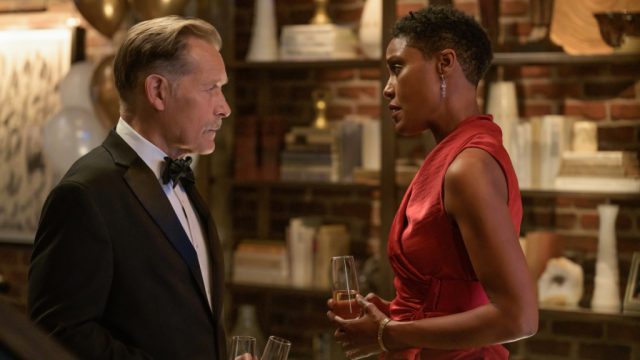 Now, you might be thinking, what’s wrong with all of this? Jefferson defied death, his allies destroyed the anti-metahuman emitter, Jefferson killed Tobias, and Jefferson’s and Lynn’s names are ultimately cleared due to Looker’s off-screen testimony. Doesn’t this tie up many of the major conflicts of the season? I mean, sure, it does. The problem however is that there are still a ton of plot threads that are either left hanging in the wake of Black Lightning’s overall conclusion, or ultimately see hasty, unsatisfying resolutions. Some of these unresolved plots, namely the necessity of continuing the battle against The 100 and the Kobra Cartel (Lala even escapes his concrete prison in an epilogue scene to reinforce this), feel appropriate and are fair enough. Anissa, Grace, Jennifer and T.C. do need an enemy to keep battling against off-screen, after all, especially when it carries the benefit of Freeland not inexplicably being crime-free because its superhero series has now concluded, a head-scratching turn that Arrow’s Star City utilized to explain how Team Arrow could disband for decades. Yeah, I know, the Book of Destiny was probably involved here, but the Arrowverse’s Star City being 100% devoid of crime for the foreseeable future is still stupid.

It’s the hastily resolved plots that really drag this finale down in several places, and that goes far beyond the head-scratching absence of Lauren and Monovista. Chief Lopez’s metahuman transformation is easily the biggest let-down here. Lopez simply sucks a bunch of power from the city’s electrical grid, then she’s knocked out by Jennifer, and that’s the end of that. Well, that’s incredibly lame! Oh, but it’s Jennifer that has one of the most thoroughly bizarre climactic story turns in this finale however, after it’s revealed that Laura Kariuki’s re-cast Jennifer was indeed a fake the whole time, and that China Anne McClain’s ‘real’ Jennifer was displaced into energy particles within the Ionosphere throughout most of this season. Uh, what? That pretty much came out of nowhere! So, Kariuki’s ‘Jennifer’ is a surprise energy-based villain for some reason, and this more or less serves as a strange excuse for both versions of Jennifer to fight. How? Why? Who knows. Basically, we just needed an excuse to re-install China Anne McClain as the Arrowverse’s one true Jennifer Pierce, which, to be honest, feels like a bit of a middle finger to Laura Kariuki, because she did a really great job portraying ‘Jennifer’ throughout the bulk of this season!

This just leaves the failed tease for Painkiller, which is, somewhat ironically, one of the better story turns in this finale. Khalil ultimately decides to enlist T.C. to erase his memories of the Pierce family, including Jennifer, which permanently saves them from Painkiller’s kill order, something that was presumably meant to lead in to a kick-off for the failed Painkiller spin-off series. Still, this is a solid resolution for Khalil’s character(s) nonetheless, one that also allows Khalil to embrace his own off-screen adventures in Akashic Valley, effectively still headlining the Painkiller spin-off that never was off-screen. 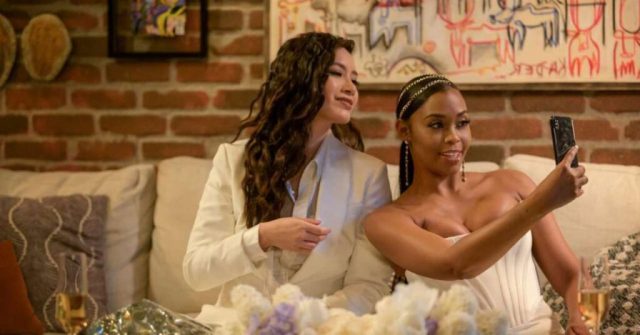 “The Book of Resurrection: Chapter Two: Closure” scrambles to wrap up an inconsistent, compromised and overall unsatisfying final season for Black Lightning, something that it obviously can’t do to fully meaningful effect. Still, Jefferson’s retirement as Freeland’s resident superhero protector feels well-earned and appropriate, as does Khalil sacrificing his memory of the Pierce family to save them from Painkiller, even if it’s meant to set up a spin-off that’s officially not happening. I don’t even mind the idea of The 100 and the Kobra Cartel persisting as off-screen threats, something that makes a lot more sense than Star City magically wiping out all of its criminals on The CW’s Earth-Prime. Still, Black Lightning’s series finale is nonetheless dragged down by hasty-to-non-existent resolutions for Lopez’s metahuman powers, Monovista’s DEG epidemic, Tobias being Freeland’s mayor, and Jennifer’s temporary recasting most notably, as well as Tobias inexplicably being nerfed all of a sudden, even if his final melee with Jefferson is nonetheless pretty cool in execution.

All in all, Black Lightning did everything it could to wrap itself up on the best note possible, even facing a slew of complications and budget shortcomings due to the ongoing COVID-19 pandemic, as well as the early death of its spin-off project. There are a lot of weird, clumsy, blatantly compromised elements to this final episode for the series, but Jefferson’s heroic journey nonetheless ended on the gratifying note that it always deserved to, allowing him and his family to embrace their own exciting new chapters in the Arrowverse to come.