With Mick having hijacked the Waverider in order to undertake his own private mission to bring back the Legends’ lost leader, the team is thus tasked with having to hike their way back to Constantine’s house. This is quite a bit later into a separate mess that unfolds in Northumberland’s Constantine estate however, as Astra is more or less abandoned at the house, where she quickly struggles to try and reintegrate herself back into society. With Constantine predictably being no help in this endeavour as well, Astra is forced to turn to a somehow less savoury teacher in, “The Satanist’s Apprentice”, after a chance rummaging through the attic leads to Astra discovering that history’s most infamous occultist, Aleister Crowley has been trapped in a painting there.

The idea of Astra being left to fend for herself on Earth is an interesting one, especially considering that she was originally positioned as one of the big bads for Legends of Tomorrow’s previous season. Through losing her station in Hell, Astra has fallen quite far, and it’s intriguing to have the show actually play into her inexplicable absence from the Waverider throughout virtually this entire season so far. Turns out, while the Legends were saving the 1950’s from hyper-addictive alien meat, and the 1960’s from an unscheduled nuclear holocaust, Astra was suffering the brunt of no power or internet, no money, and a conspicuously racist neighbour in 2021. 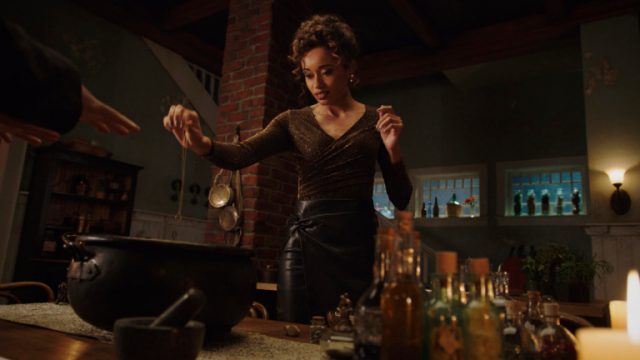 As much as it’s a dick move by Constantine to not be around during such a delicate time for Astra, it does make a decent degree of sense. Constantine has usually been a selfish character, and considering his freshly-minted relationship with Zari, he has a juvenile, but still valid distraction from his ‘duties’ at home. Constantine ultimately becoming a liability in the world of magic also makes sense, as does Aleister Crowley being used as an unexpected mentor to Astra. It’s inevitable that Crowley would have a dirty trick up his sleeve too, but to start at least, he does seem to be legitimately invested in Astra’s return to power. After all, Crowley was formerly extracted from Hell by Constantine, so it does logically follow that Crowley would want to look out for someone that formerly held a very high station in the underworld.

Astra ironically using Crowley’s teachings to angrily trap Constantine in Crowley’s former painting prison is also an effective story twist, as is the surprisingly humourous turn of the Legends finally bumbling their way to the mansion after last week’s events, only to find themselves turned into household objects by Astra’s starter spell. This eventually culminates in Astra having to steal the soul of that aforementioned racist neighbour to complete her new magic powers, which she attempts to back out of, only for Crowley to finish the job, and steal the newfound magic powers for himself. This leaves Crowley unable to be returned to the painting, at which point he starts further consolidating his power, which somehow turns the world into a cartoon? Huh?

Yeah, it’s not fully clear why Crowley turns the world animated, beyond Legends of Tomorrow flexing its latest opportunity to be weird and creatively ambitious anyway. I guess that this whole thing is meant to be somewhat of a satire of Disney’s Beauty and the Beast, complete with the Legends, as household objects, attacking Crowley, while Astra ‘sings’ a spell that her late mother put into song, which restores everything to normal, including Constantine, while also returning Crowley to his painting prison. Astra’s mother’s spell also carries an unintended, albeit interesting consequence however, namely that Constantine’s magical power has been lost, effectively putting him on equal footing with Astra. This will fittingly force Constantine to do his job as Astra’s earthly mentor, but even more exciting is that Constantine’s magic loss effectively reinterprets his place among the Legends. It seems like no coincidence that Crowley would mention what’s sure to be this season’s main macguffin, the Founation of Imperium as well, an alien wellspring of infinite magical energy. Does this mean that Constantine and/or Astra may betray the Legends toward this season’s climax?

Regardless, there isn’t much time to wonder about that now, especially while Sara remains separated from the team. Interestingly, Sara’s actress, Caity Lotz directs this episode as well, though Lotz still finds plenty of time to be in front of the camera as much as behind it, thanks to a detailed subplot for Sara that unfolds here. This subplot is used to seemingly introduce one of this season’s major recurring antagonists, that being Bishop, another original baddie that doesn’t exist in DC Comics lore. Bishop, as it turns out, designed the Ava clones, complete with having one serve as his right-hand ‘nurse’, after Sara almost succumbs to her alien poisoning. More importantly however, Bishop is the man behind Sara’s apparent alien abduction, seemingly hiring Kayla (who is still on the off-screen Waverider with Mick at this point), in order to kidnap a wide variety of alien species, so that they could contribute DNA to a rebuilt humanity, following some kind of unspecified apocalypse in the far future.

This is a very smart twist behind the initial mystery surrounding Sara’s disappearance. I imagine that Sara’s relationship with Ava will definitely come into play here to boot. In fact, it’s already keeping viewers on their toes, after Sara tries and fails to turn the nurse Ava against Bishop. Not only that, but Bishop chose Sara for a very specific reason, namely to train his new human/alien hybrids to be skilled fighters and have the will to survive, something that Sara rather bluntly and hilariously states is a terrible plan. Nonetheless, that appears to be the state of play for Legends of Tomorrow this season, and Bishop certainly appears to be a resourceful antagonist at this point. Sara even snaps Bishop’s neck after she’s initially cornered on her crashed alien ship during an escape attempt, at which point she’s simply knocked out again, only to awaken and be greeted by a resurrected Bishop. I suppose it shouldn’t be all that surprising that a cloning genius would have plenty of ways to cheat death, and that’s going to be a huge problem for Sara and the Legends!

“The Satanist’s Apprentice” delivers an occasionally clumsy, but still overall fun core storyline with Astra this week, something that’s quite overdue, considering Astra’s notable absence from most of this season so far. Many of this week’s most exciting developments unfolded within Sara’s subplot however, which properly introduces us to Season 6’s potential big bad, while also delivering some appropriately weird, yet still satisfying answers as to why Sara was abducted by Kayla, and why Bishop is so interested in capturing both Sara and a slew of aliens. Even Sara dumping Bishop’s ‘cargo’ of aliens across time isn’t really seen as a big deal by him in the end, since Bishop’s prison capsules archive their occupants’ DNA templates automatically. Bishop’s staggering operation also marks a pretty awkward time for Constantine to be de-powered, though at least Constantine now has no excuse to blow off Astra during her own magical training, something that I imagine will cause some (hopefully) entertaining friction with Zari in the weeks ahead.

Legends of Tomorrow 6.5: "The Satanist's Apprentice" Review
Legends of Tomorrow finally catches up with Astra in a mostly entertaining core storyline this week, while Sara finally meets the mastermind behind her abduction.
THE GOOD STUFF
THE NOT-SO-GOOD STUFF
2021-06-08
86%Overall Score
Reader Rating: (0 Votes)
0%