After becoming a part of an early reading and reviewing program, I was sent two choice-based forms. The first one pertained to which women’s fiction book I’d like to receive as an ARC, if possible, and I chose Good Company by Cynthia D’Aprix Sweeney, which will soon have its review posted here. Meanwhile, the second and most interesting form was all about thrillers and mysteries. Its list contained some interesting options, but none stood out more than You Will Remember Me by Hannah Mary McKibbon; an author I hadn’t heard of until then.

I was lucky enough to receive paperback ARCs for both books, and wanted to share my thoughts after just finishing You Will Remember Me today. Simply put, it was an easy and interesting read that kept my attention from start to finish. I’ll go into more detail, though.

When a young, thirty-something man wakes up on a strange beach and has no recollection of his identity or his past, the only thing he remembers is the state of Maine. Thus, he ends up boarding the trailer a couple of tourists are towing without their knowledge, and catches some shut eye in there. Luckily enough they’re headed to Maine, and it takes our mentally confused main character close to where he once lived. It’s there, where a chance encounter, and a partially remembered phone number lead to him getting into contact with his step-sister Maya. 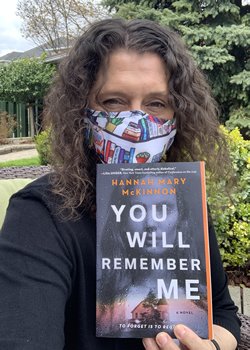 The man in question is Jack Smith, although that’s not the British ex-patriot’s real name. He doesn’t know this yet, but he’s about to enter into a massive mystery brought on by conflicting stories, past traumas and his personal form of amnesia.

Back in Maryland, a young woman named Lily Reid is searching for her boyfriend of two years, who’s disappeared while swimming at a local beach. His borrowed truck is there, but there’s no sign of him, and he’s presumed drowned. That assumption doesn’t sit well with Lily, though, and she’ll stop at nothing to find Jack. This quest becomes even more important once she discovers that someone has ransacked Jack’s tiny apartment above a friend’s garage.

You Will Remember Me is a mysterious thriller of sorts, which is told from three different perspectives. The first is obviously Jack’s, the second is Lily’s and the third is Maya’s. This creates an interesting character study containing people who all have secrets they wish to keep hidden. Of course, as is always the case, some are worse than others.

As it progresses, Jack attempts to learn more about his past, including the mysterious death and disappearances of two of his girlfriends, Lily tries to find the love of her life and Maya fears that she will once again lose her beloved step-brother.

This approximately three hundred and thirty page story is an interesting and occasionally perplexing read, which is relatively well written. It’ll likely hook you from the start though, if you’re like me, you may predict a big part of the ending by the halfway mark. Although I didn’t see the entire ending coming, and was somewhat shocked by what I did read, I guessed a lot of it before I was anywhere close to the end. It’s almost too predictable, to be honest. Then again, it’s not like I called the entire ending, because I don’t think I could’ve.

The main characters are all interesting, and feature quite a bit of depth, which is appreciated. Their voices are all unique, as are their worries and their secrets. Combined, these things will make you want to keep reading until the end.

I looked forward to reading You Will Remember Me by Hannah Mary McKinnon, because it sounded so interesting. I’m a sucker for stories like this, and its premise was right up my alley. In the end, I’m glad I requested and was sent the book, and am obviously happy that I read it. While it wasn’t the best book I’ve ever read, and disappointed me a bit with its predictability and lack of true, gut-wrenching tension, I enjoyed my time with it and would recommend it to those who are interested in such a tale.