At the risk of likely sounding like every other critic that’s still covering this series, Fear the Walking Dead certainly presented an explosive finish to its standout sixth season this week. “The Beginning” sees the disastrous results of Teddy’s plan come into motion, amping the season’s anthology format up to eleven, with no singular character focus in this case. Instead, Teddy is considered to be the central character of Fear the Walking Dead’s Season 6 finale, according to the title card, albeit mostly in spirit. The bulk of this episode more accurately involves various pockets of Morgan’s survivors, including Morgan himself, all struggling in different ways to either come to terms with their imminent destruction, or perhaps find some unlikely shelter that will protect them from the coming nuclear destruction.

It shouldn’t come as a surprise that quite a few characters don’t escape this scramble alive either, even putting aside the fact that a nuclear warhead is about to drop on top of them. Surprisingly though, only one character directly dies because of the nuclear blast wrought by Teddy’s missile, and it’s not even Teddy himself! This is not for lack of trying, mind you, as Teddy tries to bring Dakota to a, “Front row seat” for the coming, “Beginning”, only to instead be cornered by John Dorie Sr. and June. John and June both plead with Dakota to reconsider her alliance with Teddy, though they’re ultimately forced to duck into a nearby shelter without Dakota in the end. The two at least somewhat got through to Dakota however, since she’s at least disillusioned enough to turn on Teddy, and shoot him dead before he can actually see his prophesied destruction properly unfold. 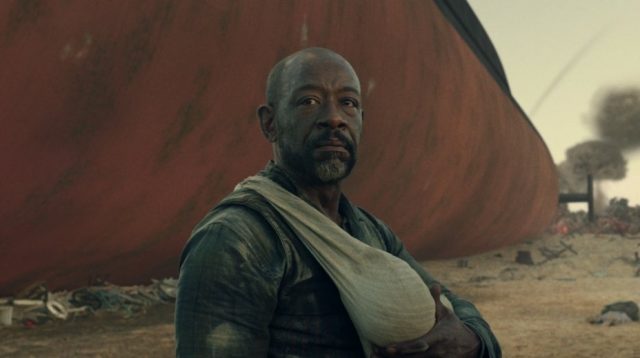 It might disappoint some that another of Fear the Walking Dead’s best villains didn’t ultimately make it past a few episodes in the end, but at least Teddy helped punctuate a shocking, memorable demise for Dakota. Yes, Dakota is that one aforementioned character who is killed in Teddy’s nuclear blast, deciding to voluntarily be incinerated by the warhead, rather than make any effort to change. It’s a fittingly tragic end for a character that ultimately caused so much pain throughout this season, despite her innocent appearance. Dakota killed John Dorie Jr., she’s likely directly responsible for delaying Strand enough for Teddy and Riley to fire off their missile in the first place, and even when John Sr. and June risk their lives trying to save her, all they accomplish is failing to stop Dakota from committing suicide in the most over-the-top way possible. I guess, for better or worse, Dakota is with her mother now.

The epic end to the tragic Dakota/Teddy dynamic certainly makes a strong impression, though it’s ultimately sandwiched between a bunch of mini-storylines that tend to range a bit in quality. Fear the Walking Dead’s continued desire to experiment with its characters and narrative structure throughout this season remains commendable here, but the show did indeed write itself into a bit of a corner with the whole nuclear bomb issue, as I previously suspected it would. At least some of the characters trying to grapple with an unstoppable obstacle makes for great material though, particularly when a last-second save by Al manages to present an especially exciting tease for Fear the Walking Dead’s upcoming seventh season. 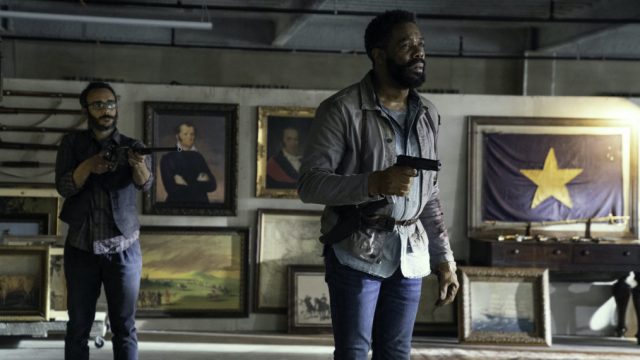 That tease plays out when Daniel, Luciana, Wes, Rollie, Jacob, Charlie and Sarah attempt to find shelter in the MRAP, taking Riley along as a hostage. Rollie initially claims to know where shelter lies, but after the MRAP needs to stop for an impromptu brake repair, Daniel takes Luciana’s gun and shoots Rollie dead, claiming that he’s a spy for the Doomsday Cult. Turns out that Daniel is correct as well, with Riley immediately confirming this suspicion. Uh, what? Rollie being a spy wasn’t in any way foreshadowed, and it’s one of a few weird contrivances that smack of Fear the Walking Dead merely wanting to clean house with its crowded cast before next season. Regardless, Daniel recalls hearing some coordinates, and the group drives there, finding a seemingly empty area. Oh, and Riley is also killed at this point, dying from injuries started from a gunshot wound caused by Charlie, after Daniel forcibly pulls him out of the MRAP? Huh? That was a weird end for Riley, especially when Wes wastes time spray painting a message that uses Riley’s corpse. Why? This place is about to be incinerated and irradiated by a nuke! No one is going to see that!

Speaking of head-scratching turns, this season finale also pulled a hell of a plot contortion in order to rectify Morgan’s and Grace’s baby drama. After crunching her leg in a car, Rachel ties her baby to herself, then has Rufus pull her along, and disembowels herself, ensuring that she’s a walker that can then be pulled by Rufus, with Baby Morgan secured in tow. Yes, this is as idiotic and contrived as it sounds. The writers clearly had no idea how to bring Rachel into the whole nuke issue, and the solution they found is pretty unintentionally hilarious, which quickly deflates the drama of Morgan and Grace finally confessing their love for one another, right when they believe they’re about to die. After somehow hearing a baby cry from outside the submarine however, which is another enormously contrived turn, Morgan and Grace decide not to commit suicide, and to instead adopt Rachel’s orphaned baby, despite the fact that they’re in fallout range, and Grace sees fit to bring up the (very accurate) danger of fallout and radiation poisoning. Well, don’t draw attention to that when characters are unrealistically surviving a nuclear explosion! Hell, I’m surprised one of them didn’t just crawl into a fridge, Indiana Jones-style!

Fortunately, like I said, not every tease for next season is that clumsy, even putting aside a bunch of Morgan’s crew now being in the orbit of the CRM, the very same high-powered faction from The Walking Dead: World Beyond, which seemingly also has Rick and Michonne from the main Walking Dead series in its grip to boot. Dwight and Sherry finally decide to rekindle their relationship again, most notably, at which point they help a family of three out by driving some Doomsday Cult thugs out of their storm shelter, before entering the shelter themselves, and seemingly surviving the nuclear blast. This still feels a little bit unlikely, especially when Dwight and Sherry should realistically have nuclear fallout to worry about, but regardless, I’m happy that Sherry is finally growing a brain, and committing to no longer being shifty when it comes to her relationship with Dwight. That story idea just never really landed, and Fear the Walking Dead is better off simply allowing Dwight and Sherry to be together at this point.

Finally, Strand chances upon the hideaway of a former history teacher, at which point he informs the teacher, whose name is Howard, that they’re both about to die. Strand even initially introduces himself as Morgan Jones after he tells the story of how he arrived at the hideaway, wanting to paint himself as the hero that was willing to give his life for the other survivors. When Strand and Howard manage to survive the nuclear blast however, Strand confesses his true identity, and goes on a rant about how he’s constantly had to reinvent himself in the name of survival, like a one-man civilization. It’s at this point that Strand seemingly snaps as well, with a worried Howard witnessing Strand declaring the dawn of a brand new day. Could this be foreshadowing a more unhinged, unstable Strand next season? That’s certainly one of the better prospects that this season finale teases.

All the while, Alicia remains off-screen, trapped in Teddy’s shelter, possibly with no one to ever find her. That in itself is another nicely ominous tease for next season, though it would have been ideal if, “The Beginning” didn’t have to sometimes do some serious plot gymnastics in order to set the stage for Season 7. This unfortunately leads to a bit of a wonky, albeit fairly creative Season 6 finale in several respects, with some characters getting served well, while some get a free baby dragged to them that they practically detect through Spider-Sense, just so they can feel better about Grace’s stillbirth. The way that some characters, namely Rollie and Riley, meet their end is equally odd and feels somewhat forced, no doubt because Fear the Walking Dead needs to thin out its massive cast a bit. At least Dakota and Teddy had more dramatic and meaningful deaths however, even if they were both ultimately rather short-lived antagonists for this show.

I guess we won’t have to wait long to see what threat faces Morgan’s survivors next though, considering that Season 7 of Fear the Walking Dead will have an unusually quick turnaround period according to AMC, being set to premiere this Fall. That’s assuming several of this show’s lead protagonists haven’t died from radiation poisoning by then.

Fear the Walking Dead Season 6 Finale: "The Beginning" Review
Fear the Walking Dead delivers a considerably contrived, but mostly engaging conclusion to Season 6 this week, as the protagonists separately try and come to grips with their likely destruction by Teddy's nuclear missile.
THE GOOD STUFF
THE NOT-SO-GOOD STUFF
2021-06-15
76%Overall Score
Reader Rating: (0 Votes)
0%