Batwoman’s had a difficult time pulling its very flawed sophomore season together, but the lead-up to the series’ Season 2 finale was at least fairly solid. This gave the Arrowverse’s struggling Batman Family-themed drama a chance to redeem itself at the finish line, hopefully presenting the foundation for an upcoming third season that may finally allow Batwoman to truly hit its stride. So, can, “Power” fulfill its duty as a satisfactory closer for Season 2? Well, it does leave a few things to be desired, especially when it comes to hastily cleaning up some of the unwelcome story elements left over from the show’s long-running identity crisis, following it having to entirely change its lead character this season. The battle against Black Mask and the False Face Society does present a fairly decent crescendo here however, while also setting up a promising tease for where Batwoman is set to go next once Season 3 premieres in October.

Thus, the final result for Batwoman’s Season 2 finale is that it’s… Okay. It’s not a truly standout episode, but it certainly doesn’t faceplant either. There are some unfortunate storylines that the series inevitably can’t find a smooth resolution for, but this finale does kick off with a pretty strong hook; Black Mask televises a broadcast calling Gotham’s citizens to action, encouraging them to wear masks akin to his, before looting and vandalizing the city, in an effort to tear down its corrupt public institutions. It’s very V for Vendetta, if V was indisputably the bad guy in that story. There’s also another inspired turn through this plot apparently being a false flag attack to boot, with Roman Sionis planning to stage an execution of his own super-villain alter-ego (using a hapless henchman in his place, of course), thus securing his place as the city’s new benefactor and champion through his supposed defeat of Black Mask. That’s also not bad, effectively presenting a dark reflection of the kind of ideal that Ryan’s Batwoman has tried to build for Gotham.

That said, not every element of Black Mask’s endgame makes sense. I have no idea how he managed to both black out all of Gotham and disable its internet and cell service (that latter issue feels way too plot-convenient in this modern age!), plus it’s never adequately explained why Black Mask sees fit to load Russell Tavaroff with an experimental cocktail of Venom and Snakebite. How does that fit in with his plan to encourage Gotham’s citizens to rebel? It just seems like Black Mask is creating a monster for its own sake at that point. Granted, Tavaroff becoming a ‘Bane-Lite’ for the Arrowverse isn’t without potential, but it honestly felt like the only reason that Tavaroff got juiced up on Bane’s drugs is so he could create an obstacle for Luke to battle against, once he finally dons the vigilante mantle of Batwing.

Luke’s evolution into Batwing may have been kicked off on a rather tasteless note, one that tackily exploits real-world police violence against the Black community throughout the U.S., but his next steps to realizing his vigilante identity have been pretty good, especially his inspiration from Arrow’s John Diggle. I do find it a little head-scratching that Luke simply found a fully-functional, optimally-powered Batwing suit in his father’s old workspace though. Again, that’s pretty damn convenient for the plot, possibly suggesting that Batwoman’s showrunners banked on having more than eighteen episodes to work with during this season. Even so, Luke is able to suit up and eventually save Mary from an enraged, hulking Tavaroff, and that’s all we see of him becoming Batwing so far. Not a bad test run, even if it’s also an overly brief and hasty one.

Where this season finale tends to excel most however is the actual final battle with Roman, Circe and the False Face Society, like I said. Ryan and Alice ultimately team up to take on Circe, apprehend Roman and free Kate, using a Snakebite vapour that can help revive Kate’s memories and restore her. It’s an unorthodox solution, but I suppose it’s a valid one. In any case, there’s a few genuinely cool hand-to-hand fights between Ryan trying to chase down and douse Kate/Circe with the Snakebite vapour, while Alice ultimately uses the Joker’s acid flower to permanently stick the Black Mask visage onto Roman, so he can’t go through with his plan of framing a henchman. That was actually one of the best twists in this finale, one that finally gave Alice a legitimately cool moment as a villain again, as well as one that calls back to a more old-school Black Mask portrayal from DC Comics lore, wherein Black Mask is actually unable to remove his eponymous mask, following a violent encounter with Batman.

Eventually, “Circe” is also cornered by Ryan on a bridge, shortly after her father is disfigured and neutralized, with Alice eventually pulling up and tackling Circe/Kate into the river as well, once the Snakebite vapour is successfully fired off. Here, we actually get another decent moment for Alice, albeit one that follows a less successful story turn for her character this season. The weaker Snakebite dose forces Alice to confront and say goodbye to her dead boyfriend, Ocean, while Kate is able to recover her memories, thus banishing the specter of Circe left by the also-dead Enigma. This also follows many Gotham citizens modifying Roman’s masks to instead call for Batwoman, seemingly rejecting Roman’s campaign to destroy their city. Yeah, this is very idealistic and unlikely, considering how miserable, opportunistic and selfish most of Gotham’s citizens are in the majority of DC Universes, but it does allow Batwoman to efficiently wrap up its battle against the False Face Society, if nothing else, as the False Face thugs are taken to jail, and Black Mask is imprisoned in Arkham Asylum, alongside Alice.

Yes, despite Alice’s efforts to assist Ryan and help Kate recover her true self, she’s ultimately and thanklessly dragged away by some inconvenient GCPD officers, once Kate returns to consciousness. Ryan allowing this to happen is a pretty cold move as well, almost threatening to give Ryan some more decent, morally ambiguous development as a vigilante, a la Arrow’s Oliver Queen. Wait, Ryan has flaws and morally ambiguous character traits now? That can’t be right! In all seriousness though, maybe that’s a positive direction that will continue next season? At the very least, Kate won’t be around next season to oversee Ryan’s evolution as a superhero.

Kate’s inevitable, but still disappointing departure from Gotham was never going to feel believable, frankly, so I’m not surprised that this is where this season finale tends to falter. Now that she’s fully restored, there’s no logical reason for Kate to abandon the mantle of Batwoman, nor is there any reason for her to permanently kill her romance with Sophie, beyond setting up Ryan as a transparent new love interest for Sophie’s character. Kate handing the Batwoman mantle off to Ryan is fine, but Gotham still needs all the help it can get, so why is Kate not suiting up as another vigilante? Moreover, Kate permanently breaking up with Sophie because they deserve something, “Easier” is downright stupid, and completely negates a huge chunk of the drama from Season 1! Besides, Kate ending a relationship just because it’s challenging makes her come off as entitled and lazy, further undermining what’s supposed to be a poignant exit for her character.

According to Batwoman’s showrunners, this exit is indeed planned as the end of the line for Kate’s storyline in the Arrowverse as well. Wallis Day is no longer contracted to appear past Season 2, and while it’s always possible that Kate could return in the future, as she begins an off-screen quest to hunt for her missing cousin, Bruce Wayne, it’s not currently in the cards. Likewise, the showrunners also finally confirmed that Dougray Scott has indeed left the show, following Jacob’s transfer to a Metropolis prison, and his disbanding of the Crows. This would seem to have Batwoman belatedly cleaning house regarding characters that no longer fit in its main ensemble with the lead actress change, though Luke, Mary, Alice and Sophie are staying in the show’s lead cast for now. Many of their characters will no doubt have heavily revised roles next season however, between Sophie no longer being a Crow, Luke now being a vigilante himself, and Alice being freshly scorned and shut away in Arkham, foreshadowing her latest backslide into villainy next season. Speaking of villainy, we’ll no doubt have plenty of that to look forward to in Season 3 as well, as the final battle with Circe results in Batman’s super-villain trophies washing up in another part of Gotham, including Mad Hatter’s hat, Penguin’s umbrella, and Poison Ivy’s vines, for anyone to exploit and weaponize! 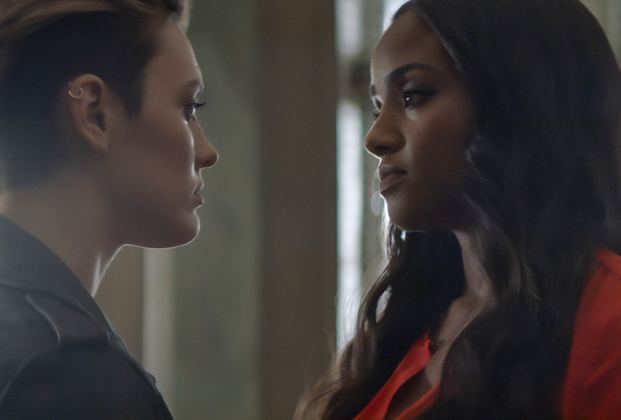 So, some things worked, some things didn’t, and the overall result is a Season 2 finale for Batwoman that does its job as well as it can. “Power” is decent enough in execution, but it’s ultimately dragged down by some of this season’s hefty narrative issues, especially its forced need to retire Kate’s character so that Ryan can ascend as the Arrowverse’s one and only Batwoman. The ultimate defeat of Black Mask is mostly satisfying though, particularly when he survives to be indefinitely tormented at Arkham alongside Alice. The final tease of Batman’s villain trophies potentially making it into the hands of fledgling Gotham criminals and opportunists is also a pretty good hook for the upcoming Season 3, especially as Luke officially takes his station as Batwing. It’s too bad that the Venom-enhanced Tavaroff didn’t have much to do beyond toss garbage around and chase Mary for a bit, but at least Luke’s teasing debut as Batwing also sets up some solid promise for next season.

Again, maybe now that Batwoman has stabilized with a new lead actress, and hopefully some better, more consistent story ideas from here, maybe Season 3 is the point where the show can finally start achieving its true potential. It’s probably too little, too late at this stage, considering that Batwoman’s viewership and mainstream reception has thoroughly dove off a cliff during this season in particular, but maybe better days are finally ahead for the Scarlet Knight. After all, Season 3 will finally see Ryan fully freed from the legacy of Kate Kane, hopefully enabling her to break away from the past, and chart a bold new future for the Arrowverse’s most contested drama.