The Legends are finally reunited! With Sara returning to the team, and everyone trying to catch up on the misadventures and weirdness that has unfolded over the course of this season so far, everyone is definitely in the mood for a laid-back, ‘normal’ mission. Well, whatever passes for a ‘normal’ mission for the Legends anyway. Fortunately, “Stressed Western” brings the Legends back to a frequently familiar period setting, the Old West, specifically Oklahoma, 1891. Sure, this means that Jonah Hex isn’t around this time, but it also means that the Legends can focus their energy on simply hunting a rogue alien, several of which are still scattered across history due to Sara’s former escape efforts.

This episode is also noteworthy because it serves as David Ramsey’s negotiated appearance on Legends of Tomorrow, after the Arrow veteran signed a widespread deal with The CW that set up guest appearances throughout the Arrowverse this season. Unlike Ramsey’s other planned Arrowverse re-appearances however, he isn’t portraying his iconic Star City vigilante, John Diggle in this case. Instead, Ramsey portrays significant Black historical figure, Bass Reeves, the first Black man to serve as a deputy U.S. marshal across Oklahoma and Arkansas. This unfortunately squashes speculation from DC fans that Diggle would finally ascend to his oft-teased station as the Arrowverse’s Green Lantern in this Legends of Tomorrow episode, something that stings even more when you consider the prime setup of the Legends hunting aliens as the central antagonists of Season 6! 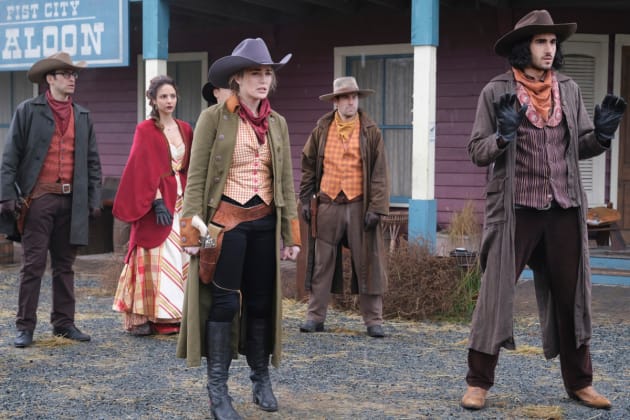 Despite Ramsey’s rather minimal, inconsequential bit part as Reeves in this episode proper however, he also directs this week’s Legends of Tomorrow offering, and that’s a treat, because Ramsey has proven several times over to be one of the most adept directors in the Arrowverse’s arsenal. Ramsey gets a pretty fun story hook to work with this week as well, namely a gargantuan alien-of-the-week called a ‘Haverack’ (no, this alien doesn’t exist in DC Comics lore, but are you truly surprised at this point?), which is drawn to stress and anger, and devours anyone that upsets it with hostile emotions. This naturally ties into the Legends trying extra hard to be ‘normal’ on their latest mission, something that inevitably leads to tensions boiling over in the long term, particularly when Sara’s attempts to keep her new condition and abilities secret from the team inevitably don’t pan out.

This latest mystery for the Legends starts off very entertaining for sure, as they stumble into an infamous Old West community called Fist City, supposedly one of the most violent locations in the time period. Upon entering the local saloon however, the team is greeted by friendly, forthcoming and clean-living citizens, quickly confusing the hell out of Sara and her crew. I actually wish that this episode had more fully committed to this hilarious idea, as the eventual reveal that the citizens are merely trying to appease the alien in order to harvest the gold it literally poops out eventually leads to them frustratingly turning on the Legends and trapping them in the saloon, in a more predictable turn. Well, most of the Legends anyway. 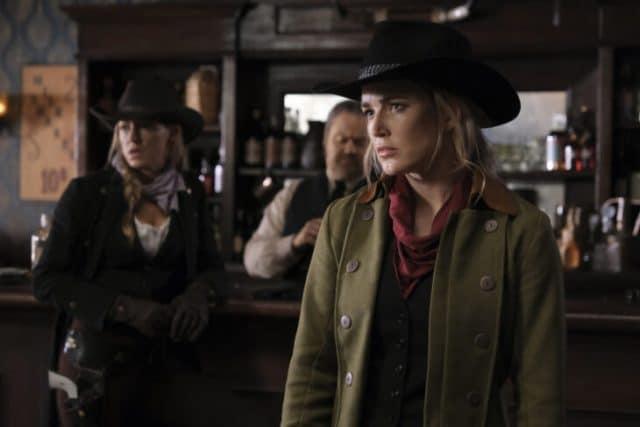 Astra and Spooner instead get separated into their own subplot, which is how this episode brings Bass Reeves into the picture. Like I said, Reeves has disappointingly little bearing on the plot in this episode, making one wonder why Ramsey had to appear in front of the camera at all in Legends of Tomorrow’s case, especially if he couldn’t even play Diggle on this particular Arrowverse series. In any case, Astra and Spooner argue about Astra’s need to assert power, which eventually ties into Spooner’s revelation that she’s a foster child who lost her mother at a young age (not terribly shocking), and this I guess leads to Astra and Spooner becoming friends? This does make sense on paper, considering that both Astra and Spooner are struggling to master new powers that they don’t understand throughout this season, but Astra’s inexplicable gold-hunting quest doesn’t make a lot of sense. It merely felt like an excuse to set up Spooner and Astra as the ones to destroy the Haverack during the climax, and I’ve got to say, Spooner’s alien-subduing and sensing powers are starting to become a frequent ‘Deus Ex Machina’ at this point.

Before this climax properly unfolds though, the Legends inevitably provoke the Haverack by collectively airing out their issues, some of which feel more earned than others. Everyone reacting with mixed emotions to Sara surviving a duel wherein she’s shot in the head, thus revealing her new healing factor abilities to the team and Ava, feels legitimate, as does Constantine trying to coerce Gary to reveal the Fountain of Imperium to him. Some of the Legends’ complaints feel dumb and forced though. The Tarazi siblings are particularly troublesome here, as Behrad decides to pursue a local woman against Zari’s wishes, which leads to a petty argument between the two of them. Likewise, Nate complaining yet again about how the team supposedly doesn’t appreciate him, especially after he lost Zari 1.0, is tired and tedious. It is nice that this blow-up from Nate later inspires Behrad and Zari 2.0 to lend their Wind Totems to him, so that he can visit Zari 1.0 when he needs to, but this nonetheless begs the question; Why the hell did Behrad and Zari 2.0 not think to make this offer before?! Maybe Nate has a point about the team mistreating and neglecting him, Behrad especially, considering that Nate and Behrad are supposed to be Legends of Tomorrow’s new bromance! 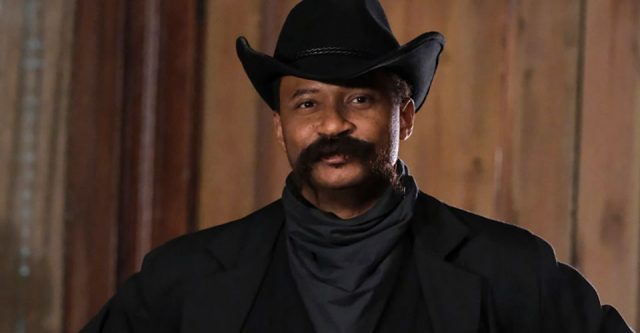 On the bright side, the Legends do manage to work out their issues for the umpteenth time after the Haverack’s defeat, leaving another successful alien-hunting mission in the bag. “Stressed Western” works reasonably well as another fun diversion for the Arrowverse’s time-traveling anti-heroes, though it is a bit mixed in terms of getting the Legends to face interesting and worthwhile issues between themselves and one another. David Ramsey’s direction is reliably entertaining for sure, but it would have thrived even more if this episode’s writing could have fully stretched its initially funny Old West idea into a more properly fleshed-out conflict. As usual, a lot of the narrative shortcomings in this episode yet again stem from more tired, insufferable relationship drama as well, eventually culminating in Constantine temporarily departing the team, so he can go consult Aleister Crowley about the Fountain of Imperium at his house. I guess that’s fair. At the very least it can give Zari something else to do beyond be an insufferable girlfriend.

Legends of Tomorrow 6.8: "Stressed Western" Review
Legends of Tomorrow presents a mostly fun Old West diversion for the team this week, though it can't quite stretch an amusing premise to a fully satisfying result.
THE GOOD STUFF
THE NOT-SO-GOOD STUFF
2021-06-28
75%Overall Score
Reader Rating: (0 Votes)
0%