Loki spent all of last week zooming in on the strange dynamic between its eponymous subject and his female variant counterpart, as they face an apocalyptic romp that ultimately ends in tragedy. Obviously though, with that episode merely serving as the halfway point of Loki’s debut season, the TVA was bound to catch up with the two Loki’s before they could face true extermination. That fortunately happens quickly within the series’ fourth episode this week. “The Nexus Event” returns Loki’s storytelling back to the offices of the TVA, following the recapture of Loki and Sylvie, which naturally motivates Loki to try and tell Mobius the truth about every TVA agent being a variant that was plucked from the sacred timeline, and conscripted by the Time-Keepers.

Unfortunately, what could have been a dramatic, twist-filled episode of Loki instead brings the series to a frustrating crawl, as Loki’s pleas to Mobius predictably fall on deaf ears. So much of, “The Nexus Event” is spent catching the rest of the characters up to the deception behind the TVA, which unfortunately leaves Loki to yet again flounder in terms of humour or legitimate intrigue. The end result of this episode is at least worth it, thankfully contributing more revelations that showcase a lie deeper than even Sylvie imagined, but the journey there is unfortunately a lot of character back-and-forth that feels less worthwhile in the moment than you would hope.

The issue here is, almost none of the extensive dialogue in this episode legitimately fleshes out the characters, particularly Loki himself. There is one promising moment on that note at least, where Loki is thrown into a time prison for running away, at which point he’s repeatedly chastised and beat up by Lady Sif on a loop. This comes complete with Jaimie Alexander making an unexpected cameo in this series for a turn that’s both funny, and kind of weirdly heartwarming. Too bad this episode can only do so much with this idea though, as the gag wears thin pretty quickly. Perhaps the writers knew this, considering how quickly Mobius ultimately pulls Loki out of his torment, just to keep denying what the God of Mischief keeps telling him.

We don’t even see Sylvie for most of this episode in fact, though she does manage to tip off Hunter B-15 about the same hard truth regarding the TVA. After B-15 takes Sylvie away from the prying eyes of Ravonna Renslayer, Sylvie uses her enchantment abilities to unlock B-15’s suppressed memories, thus proving that she’s a variant. That at least provides one useful ally for the Loki’s, but Mobius’ own journey to the truth is far more tedious, not to mention practically useless in the end. After Ravonna congratulates Mobius on apprehending the Loki’s, Mobius steals her data assistant, and sees that Loki was telling the truth about the mentally liberated C-20, who was ‘pruned’ (read: executed) off-screen. This motivates Mobius to free Loki, though he’s unfortunately cornered by Ravonna in mere moments, at which point Mobius is pruned!

This is where this episode finally starts kicking into high gear, and frustratingly, it’s at the point where it’s almost over. Don’t cry for Mobius though. His apparent death is just one of several ornate tricks that reveal the entire TVA as a massive fraud, and the journey to seeing how deep that goes manages to be pretty exciting. This kicks off properly when Ravona brings Loki and Sylvie to an audience with the Time-Keepers at long last, at which point B-15 intervenes, frees Loki and Sylvie from their collars, and tosses Sylvie a sword. It should come as no surprise that the following action scene once again feels a little hobbled, with Loki and Sylvie still continuing to struggle in combat against regular people, though at least the Time-Keepers’ domain carries the valid excuse that Loki’s and Sylvie’s magic is disabled, unlike Lamentis-1. 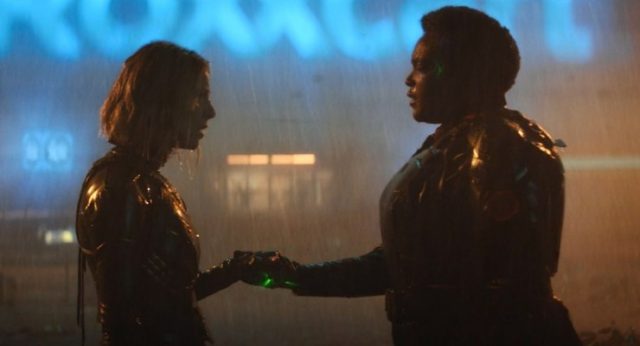 In any case, Loki and Sylvie manage to come out on top against Ravonna’s agents, and Sylvie even manages to take her shot at one of the Time-Keepers!… Only to have it revealed that the three Time-Keepers are all mindless androids, and fake overseers installed by some mysterious party. Ravonna appears to be linked to said party as well, suggesting that she’s the right hand of the real mastermind behind the TVA, who is almost certainly Ravonna’s lover from Marvel Comics lore, Kang the Conquerer! Could this mean that the entire sacred timeline is a manipulation by Kang, likely one to ensure his rise to power and dominance in the future? Well, Loki at least won’t be able to think on that right away. Right as he prepares to tell Sylvie something important, Loki is unfortunately pruned by an enraged Ravonna! This shocking fate fortunately doesn’t reach Sylvie however, who manages to subdue Ravonna, before demanding that Ravonna tell her everything about who the TVA agents are actually working for.

Now, remember how I said don’t cry for Mobius, and how I didn’t seem to be all that phased that yet another Loki death has occurred in the Marvel Cinematic Universe? Well, in yet another cool twist, the ‘pruning’ by the TVA agents doesn’t actually appear to kill the victims. Instead, a mid-credits scene occurs in this episode, wherein Loki wakes up in a strange, devastated version of New York, complete with a visibly ruined Avengers Tower. That’s not the real draw in this mysterious scene though, as Loki is directly greeted by four all-new variants of himself! These include a young boy, an old man wearing comic-accurate Loki garb (as Marvel fans speculated, this was Richard E. Grant’s mystery role), a Black man wielding a Mjolnir-like hammer, and, most amusingly of all, an alligator with a small Loki helmet! It would seem that the TVA has dumped a lot of variant Loki’s in this seemingly devastated alternate universe, possibly suggesting that Mobius could be here somewhere as well, or maybe in another dead timeline that resulted from a TVA time charge. 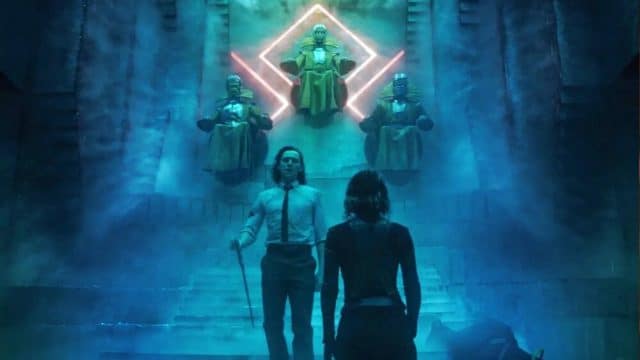 The true scope of the lies behind the TVA easily makes for the most riveting material in this episode, even though much of it is just way too undercooked. “The Nexus Event” is a disappointingly boring offering that once again has Loki spinning its wheels too much, expending most of its zany creativity in weeks past (at least beyond that inspired Sif gag!), and failing to do much more than have Mobius and B-15 stumble into what audiences already know. Fortunately, the awesome ending to this episode at least teases a more fun and engaging episode next week, as Loki meets yet more alternate multiverse versions of himself, while Sylvie prepares to learn who is actually behind the TVA, even though Marvel fans no doubt have a pretty good guess as to who is pulling the strings behind this show’s events. No matter what happens next though, I hope we have no more sluggish exposition to slog through from here. The fraudulent TVA operation has been laid bare, and the time for secrets and lies is finally past.

Loki 1.4: "The Nexus Event" Review
Loki frustratingly stalls with a dialogue-heavy episode that wastes most of its runtime this week, though it at least offers an exciting conclusion.
THE GOOD STUFF
THE NOT-SO-GOOD STUFF
2021-07-02
68%Overall Score
Reader Rating: (0 Votes)
0%