Coming off of a short break over the past week, Legends of Tomorrow returns with another character-focused episode this week, in this case centering around Behrad. “This is Gus” serves as another sitcom-themed mission for the team, and it’s kind of amazing that this isn’t the first time they’ve faced a task of this eccentric nature! Regardless, this is a bit of an understated episode for the series, one with a sweet message and final result, even if it’s certainly not packing the kind of zany appeal that Legends of Tomorrow tends to deliver on its A-game.

The core conflict this week involves the Legends traveling to Vancouver, British Columbia, Canada in 2023, on Behrad’s 25th birthday. Behrad is naturally excited for what he anticipates is a surprise party, but in reality, most of his teammates forgot about his birthday. This eventually spurs the team to improvise once they coincidentally end up attending the first taping of what would eventually become Behrad’s favourite cult sitcom, “Bud Stuy”, after an impulsive decision by Spooner ends up stranding the latest time-displaced alien on the set of the show. The idea appears to be to create a snowballing series of unfortunate events, as the Legends’ latest alien quarry turns out to be adorable, easily winning over a bored sitcom audience, and thus resulting in a major creative change to a more mass-marketed sci-fi sitcom format. In execution though, this episode is just too bland to fully register. 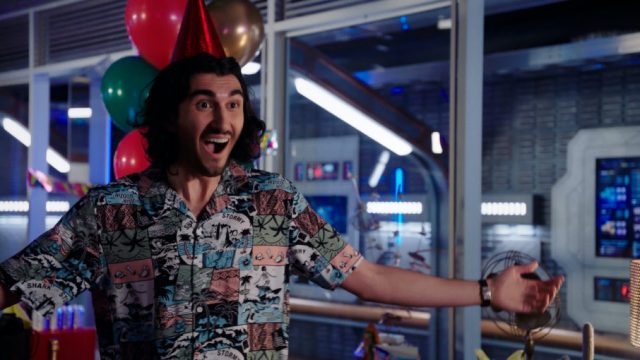 Once again, it seems like Legends of Tomorrow is in a bit of a sleepy state during its current season, possibly because of production limitations caused by the COVID-19 pandemic. Either way, the show is increasingly falling back on tired, contrived scenarios lately, rather than truly embracing its full creative potential. This is evident right from the jump here, when this episode only happens because Spooner inexplicably shoots at an alien pod that’s about to land right in front of her and Sara. Even the idea of the Legends forgetting Behrad’s birthday is such an old, tired TV trope that it’s simply eye-rolling, especially when this show wastes several key opportunities to keep winking at the audience about its own meta writing. In fairness though, it still successfully capitalizes on some of these moments, particularly in regards to its Vancouver setting, along with Nate being cast in a re-tooled show that he believes is for The CW. Yes, apparently The CW still exists on Earth-Prime, after this network was first acknowledged as existing in-universe within Supergirl’s former Pre-Crisis Earth-38 setting in 2016.

The idea of an adorable crashed alien inadvertently retooling Behrad’s favourite sitcom, and fundamentally changing his personality and life direction as a result, thus in turn upending the timeline and threatening the integrity of the Legends as a whole, is another great idea in concept. Yet again though, Legends of Tomorrow seems to struggle to mine effective humour or action from this story hook. Behrad becoming a corporate douche as a result of the timeline change feels like another tired genre cliche, and not only that, but shouldn’t Behrad not even be present in 2023 at all anymore, if he never joined the Legends in the first place? The show remembered to eliminate the Wind Totem after Behrad’s alteration, so why is Behrad still around, period, especially when the Season Four finale originally had him instantly overwriting Zari 1.0 in the timeline? It feels like Legends of Tomorrow significantly bent its own time travel rules here, simply to try and push a silly twist that doesn’t actually work. 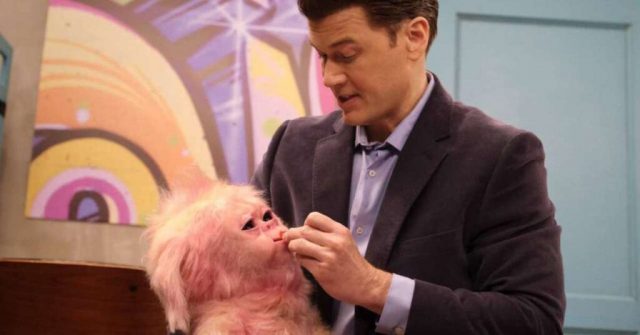 Like I said though, at least the end result is worth the effort. After the Legends successfully convince the sitcom not to change and make itself more appealing to mass audiences, thus restoring Behrad and history at large to normal, the team properly celebrates Behrad’s birthday. This is also when Zari 2.0 comes up with a surprisingly heartfelt solution to two different versions of herself existing in the timeline; She can take Zari 1.0’s place in the Wind Totem on occasion, thus allowing Zari 1.0 to return to the Waverider, and physically reunite with Nate. This is actually a great idea, allowing Legends of Tomorrow to use whichever Zari would best benefit any given storyline. It’s also gratifying to see Zari 1.0 come out and witness Behrad’s celebration to boot, allowing her to achieve real solace regarding the fact that her brother is now alive in Earth-Prime’s current future.

This episode also features a subplot surrounding Mick, one that finally brings Lita back into the series. Again, this subplot is a great idea in concept as well. It begins with Mick discovering that Lita has become pregnant with her college boyfriend, something that initially has him flying into a rage. After Mick confronts the guy off-screen however, the two actually end up making peace, and Mick goes on to accept that he’ll be a grandfather soon. That’s well and good, but again, this feels like another shrug-worthy cliche. There aren’t any curveballs of note in this subplot, at least not until the end of this episode, when Gary learns about Mick’s hook-up with Kayla. Apparently, Kayla involving her tentacles in the hook-up means that Mick is now ‘pregnant’ himself, having a pod of alien babies growing in his brain! This may come too little, too late, but it represents the kind of creative, zany humour that Legends of Tomorrow thrives on, at least promising that we can get a better Mick subplot next week, if not this week. 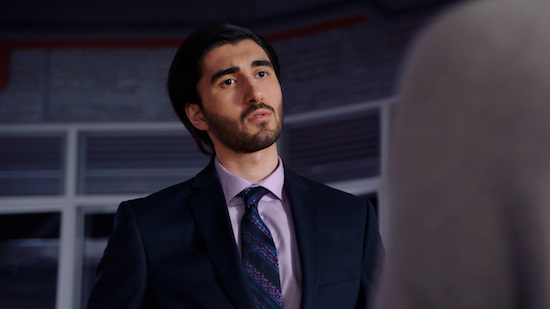 The Legends adopting a surprisingly cute animatronic alien is another promising turn for next week as well, though this merely cements that many of the most appealing elements behind this week’s episode are teases for the one to come after it. “This is Gus” unfortunately squanders its promising core storyline with Behrad, ultimately drowning in tired, cliched writing that it can’t find an adequate way to satirize, especially when the Legends have already had a sitcom-themed mission before! Mick’s subplot takes a similarly tedious turn this week, ultimately failing to stand out in any meaningful way, until the very end of this episode anyway. In the end, this week’s Legends of Tomorrow offering simply ends up being a filler episode that wants to say something meaningful and vaguely meta about representation and cult TV shows, but it can’t really find the words in the end, and that’s a shame.

Like I said though, at least we have plenty to look forward to on Legends of Tomorrow next week. Could be worse, I guess.

Legends of Tomorrow 6.9: "This is Gus" Review
Legends of Tomorrow stumbles with a tired filler episode this week, as it delivers another sitcom-themed mission that does too little with its Behrad-focused storyline.
THE GOOD STUFF
THE NOT-SO-GOOD STUFF
2021-07-12
67%Overall Score
Reader Rating: (0 Votes)
0%