The Flash delivered a fairly exciting, if slightly uneven first half to its two-part season finale storyline last week, and now, it’s time to wrap up the surprisingly short-lived ‘Godspeed War’ this week. Considering how much this storyline has been teased and hyped up on The Flash across the past two seasons, it’s a little surprising that the conclusion of Season 7 sees it come to a neatly-wrapped conclusion, one that misses a few key opportunities to really maximize the true August Heart finally coming out to menace Central City. Fortunately, “Heart of the Matter, Part 2” is nonetheless a very exciting finish to Season 7 at the very least, one that doesn’t provide much of a blatant lead-in to Season 8, but still delivers a much more lively and engaging offering than much of the COVID-19-plagued Arrowverse has provided all season at this point.

The stubborn shortcoming behind this otherwise solid season finale conclusion is the fact that it rushes through a few story conflicts to a frustrating fault. There’s even a major turn with Kristen Kramer that’s finally presented in this episode, wherein she’s revealed to have been a metahuman the whole time (I called it!), one that can briefly use the powers of any other metahuman in her proximity, even artificial ones like the Godspeed clones. This is demonstrated when Kramer temporarily gains super-speed and runs Joe away from a Godspeed clone battle, eventually leading to her getting a positive test for the Meta Gene. Wait, Central City can literally test you for that now, like a virus? That’s a new development. In any case, it might have been nice to get just a little more focus on Joe and Kramer here, who are once again sidelined in favour of other storylines, but perhaps Kramer taking an indefinite leave of absence from CCPD could position Joe to get his old job back, if that’s what the show’s Season 8 storyline demands. 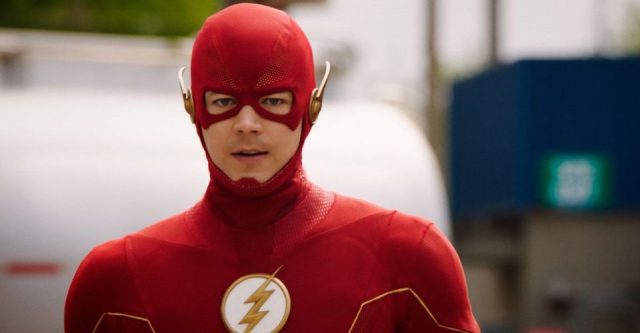 It’s also annoying that The Flash very quickly reversed Bart’s coma, to the point where he might as well have never been comatose at all. This tragic turn for Bart is undone early on with a simple snap by Speed Force Nora, or, “Big Nora”, as Barry’s daughter, “Little Nora” calls her (this could be a handy way to differentiate the two Nora’s, going forward), putting, “Impulse” back in the game for a series of battles between the Godspeed clones and Team Flash’s finest. Even Iris gets a temporary speed boost from ‘Big Nora’, allowing her to once again briefly become a speedster, and assist her family in repelling the Godspeed clones. This only lasts for so long, since ‘Big Nora’ eventually gets her energy sapped by the clones, forcing her to flee, but Team Flash does manage to hold their own long enough to keep Central City safe, resulting in some fairly solid action beats that finally flex The Flash’s budget again, and make it feel more like the comic book-inspired series that it’s supposed to be.

This initial success against the Godspeed clones also occurs thanks to Allegra, who taps into her proper powers again, after a pep talk from Chester. Take a shot. Actually, take two shots, because Allegra starts this important conversation by complaining that she’s done with pep talks, only to be restored by a pep talk anyway. Only you, Arrowverse. Anyway, this point of the episode will probably just want to make you go back to the action, as The Flash’s various speedsters argue in circles about whether or not to grant August Heart the gift of organic speed. That’s actually one of the major conflicts behind this season finisher, and it occurs after Barry’s initial meeting with Heart’s mental avatar in the amnesiac Heart’s mind, an event that kicks off the start of this episode. Heart’s mental avatar says that he won’t destroy the present if Barry simply makes him a real speedster, in a Pinocchio-inspired twist that finally makes the Arrowverse’s Godspeed a more interesting, multi-dimensional character… At first. 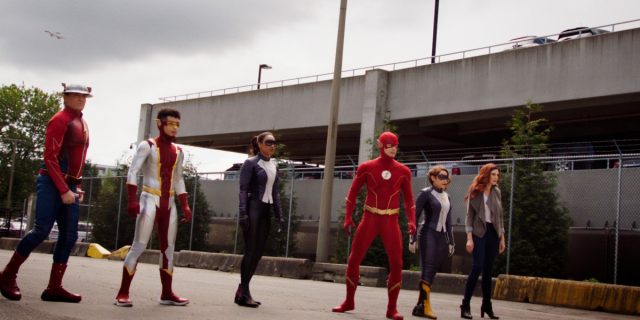 Yes, sadly, this season just doesn’t have enough runway left to properly play with this idea of August Heart being a brilliant man with serious speedster envy, and the logical Eobard Thawne to Bart Allen’s future Impulse. There’s still some really great dramatic moments that are touched on here though, as the amnesiac Heart confides in Cecile that he’s scared of regaining his memories, because he doesn’t want to be the bad guy. This is a very interesting dilemma that has the show teasing a chance for Heart to change his future and make new memories, while also leaving Team Flash with the question of whether they can truly solve their problems in the present and the future by just giving in to Heart’s avatar’s demands, and making him a true speedster. This promising storyline being tragically cut short could possibly be an issue caused by Season 7 of The Flash being shortened to just 18 episodes as well. I definitely get the impression that this August Heart conflict wasn’t meant to be brought up and resolved within the same episode.

Regardless, when Barry and Iris decide off-screen, rather abruptly, to give August Heart real speed, he simply decides that he likes being the bad guy upon instantly regaining his lost memories, and that’s that. Ugh. The Flash just pissed away another promising villain idea, especially when the series hasn’t featured a speedster arch-villain in years! I will say however that the climactic confrontation with Heart is genuinely awesome, as Barry makes the unexpected move of calling Eobard Thawne, the Reverse-Flash himself, to his side in order to take Heart down! Barry correctly deducing that Thawne will not allow anyone else to kill him, thus ensuring that Thawne will appear if Barry is in mortal danger, is pretty cool, especially when the resulting fight scene with the true Godspeed results in the speedster trio using their Speed Force lightning as swords. It’s a little silly, and it’s not really explained why this ability has never been used by an Arrowverse speedster before, but again, it’s just great to see The Flash finally featuring some real action again for a change! It’s too bad that Heart is thanklessly defeated and quickly tossed into 2021’s Iron Heights after this battle is done, but Barry taunting Thawne about his complacency hopefully means that Tom Cavanagh can return to The Flash again someday, despite the fact that he ostensibly left the show during this season. 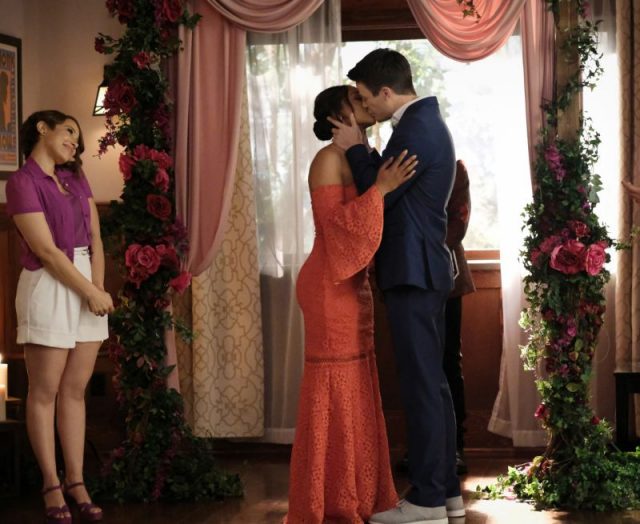 This leaves Season 7 to end with Barry and Iris renewing their wedding vows, while Cisco officiates, in a sweet conclusion, if also one that doesn’t give a clear hint as to what to expect from The Flash during its upcoming eighth season. In terms of how the series managed to end Season 7, “Heart of the Matter, Part 2” doesn’t quite make the most of its interesting new examination of Godspeed, nor some of its secondary character subplots. Hell, did we even properly establish how August Heart was able to send a ton of Godspeed clones to the present in the first place?! Still, credit where it’s due, this episode had a lot of solid action in it, it made effective use of the extended Arrowverse family of speedsters (though Wally is still missed), and the ultimate conclusion of Barry and Iris renewing their vows alongside their friends and extended Team Flash family felt like a cute, satisfying way to close out the season. This wasn’t a perfect season finale for The Flash, but it did its job, plus it finally gave The Flash a true sense of excitement again, something that I hope carries over into next season, now that much of the world is slowly starting to recover from the COVID-19 pandemic.

The Flash Season 7 Finale Part 2: "Heart of the Matter, Part 2" Review
The Flash delivers an exciting finish to the Godspeed War and Season 7 this week, though this finale doesn't fully capitalize on its interesting subplots.
THE GOOD STUFF
THE NOT-SO-GOOD STUFF
2021-07-21
77%Overall Score
Reader Rating: (1 Vote)
100%