The best thing about literary fiction is that it takes you to new places, like some sort of mental vacation. Sometimes these locations are real, but they’re often made up or even fantastical in nature. The key is finding the type of mental trip you’d like to take.

In bestselling thriller author Roz Nay’s latest, which she’s called The Hunted, two American twenty-somethings depart on a life-changing venture. Their names are Jacob Jones and Stevie Erickson, and they’re both 24 and from a small town in Vermont, where they once cleaned ships and ran a respectable pub. Alas, when Stevie’s grandmother passed away and it was revealed that the bar was, in fact, not left to her in the will as promised, things had to change. The couple were evicted from their apartment above the establishment, left without a lot of the income they once kind of took for granted, and practically destitute.

It was at this time where Jacob talked Stevie into doing something he’d been thinking about for some time. That is, going to an island in the middle of nowhere in Africa, to partake in an ecologically friendly diving and cleaning operation that hoped to save the local reefs. Run by an old friend, this GoEco operation offered a chance of a lifetime, and it helped that Jacob already made a living diving with his father. If this wasn’t the right time for such an immense change, when would be better?

Things pick up as the two arrive in Africa, and begin to experience a culture and way of living so much unlike their own. Dealing with the dust, noise, poverty and do-anything-for-a-dollar mentality of African city life, they find themselves somewhat overwhelmed. Then, during their first night at a highly rated hostel, something happens. Stevie gets up to go to the bathroom during the middle of the night, and finds herself being toyed with by an unknown party.

After that, the two decide to leave for the island earlier than planned, with the idea of stopping at a resort en route. It’s as they’re deciding this, and trying to find some safe food to eat, that they run into a striking young British man named Leo Asher, who later introduces them to his stunning girlfriend, Tamsin. The foursome become friendly, and are then surprised when their itineraries end up being similar later on.

Originally told from Stevie’s perspective, The Hunted by Roz Nay focuses on the idea of being watched, feeling unsafe in a new place and the worst of humanity. It’s a travel tale with nightmarish elements, and it’s a thriller at heart. It isn’t only a one perspective story, though, as Leo also narrates quite a few chapters from his own point of view. It’s during those where he talks about his relationship with Tamsin, his troubled past and how much he’s intrigued and stunned by Stevie. 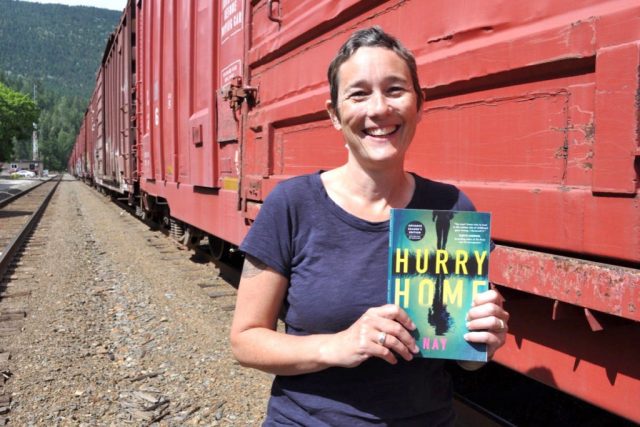 If you’re worried that I’ve spoiled this book for you, don’t. I can’t say much more for fear of doing so, but what I’ve said is revealed early on. There’s more to things than meet the eye, as is usually the case, and the reader discovers more and more as things move along. Characters have secrets, all is not as it seems…yadda, yadda, yadda.

For the most part, this is a well written and interesting read, although it does dawdle a bit too much. There are times where it can be a bit boring, as a result, but it’s never not worth reading. This is yet another solid effort from a pretty good author.

I first read Roz Nay’s Our Little Secret when it caught my eye at the local library, or on its website. That was a good book, but nothing spectacular. Then, her second novel (Hurry Home) caught my eye on a review website, and I requested it immediately. If you read my recent review of that book you’ll know I felt similarly about it. Both were good summer or weekend reads, but neither one stood out as must-read or unforgettable fare.

I feel pretty much the same way about The Hunted, and it’s for this reason that I struggle to pick a favourite out of Nay’s three novels. They’re all solid, I enjoyed reading them all and I’d recommend reading them if you’re looking for an easy and interesting thriller, but none of them stand out as truly being better than the rest.

Going in, I had hoped that The Hunted would set itself apart and become my de facto favourite, but it was simply solid. There was a lot of potential within it, but the story never stepped outside of the proverbial box, or stretched its limits enough to reach its full potential.

This review is based on a copy of the book that we were provided with by NetGalley and the book’s publisher. Thank you to them for approving us. Receiving a free copy of this book did not affect our opinion or sway our review.