NOTE: Full spoilers for this episode of, “Y: The Last Man” are present in this review

FX on Hulu’s Y: The Last Man certainly didn’t make the best first impression with its initial episode, which spends almost its entire duration fixating on inconsequential story elements before its all-important Y chromosome-decimating apocalypse even arrives. Fortunately, the series launched with three episodes simultaneously, including here in Canada, where Y: The Last Man airs on our FX channel, before being hosted on Rogers’ FX Now app. That’s good news to some extent, though unfortunately, the series’ second episode, “Would the World Be Kind” continues the frustrating holding pattern that the first episode held.

The apocalypse may have finally kicked off for this post-apocalyptic drama, but even after that, Y: The Last Man feels like it’s spinning its wheels, and over-fixating on unimportant details that don’t truly matter. This episode includes a small time jump to around two months after the mass death event that killed every male, trans woman and anyone or anything else possessing a Y chromosome on Earth, but even then, not much is accomplished beyond a bunch of bellyaching about the imminent failure of society… Which then never seems to truly fail. Sure, there’s an evacuation ordered for New York, which is starting to flood due to a lack of trained men to maintain the city, but even this doesn’t feel like a pressing concern for now, as the lead characters continue to waste time and get nowhere.

Even Yorick, this show’s supposed main character, still has nothing worthwhile to do but bumble around and mope over his lost girlfriend, Beth. Beth doesn’t show up in this episode either, instead leaving Yorick to hunt a missing Ampersand, after he takes off in a flooded subway… Only to come back to Yorick later, with nothing of value lost beyond a Snickers bar. Well, what was the point of this plot then? I suppose it’s meant to leave Yorick briefly cornered, in the nude no less, by a group of terrified Chinese women in a dry cleaners’ building, one of whom briefly suggests ‘trading’ Yorick to… Someone, to some unknown end, supposedly. Even this goes nowhere however, and Yorick simply walks away from this encounter unscathed, without so much as an earnest promise that an antagonistic faction is brewing somewhere in this apocalypse.

Jennifer at least has a bit more to do here, now that she’s President of the United States, though so far, her jobs aren’t much more interesting. Some of the commentary and struggles on Jennifer’s end are decent though, such as Jennifer having to briefly deflect from Kimberly, after declaring that she’s prioritized securing sperm banks. So, it would seem at this point then that the surviving world is aware of the fact that almost every victim of this mysterious apocalyptic event is male. It is a little weird that this show seems to be visibly afraid of directly declaring that though. There’s passing mentions of the fact that frozen sperm is now invaluable, and that trans men now have limited testosterone supplies, but beyond that, no one comes right out and says that all the men are dead (and trans women). Really? We’re not going to dive deeper into that? 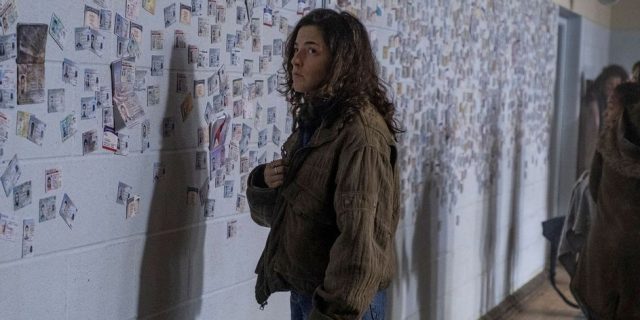 This yet again leaves Y: The Last Man inexplicably afraid to embrace its own hook within its first episodes. On top of that, the series still feels too derivative with its post-apocalyptic narrative at this point. There’s mention of the White House being stormed and overtaken by displaced women, looting and rioting in the streets, and all of the cities supposedly failing en masse due to the lack of men… But we never see any cities actually collapsing yet, so that doesn’t feel like it matters at this point. Still, the quieter scenes with Jennifer are often performed better than those that supposedly carry urgency when it comes to repairing what’s left of the world for now. Maybe the post-apocalyptic thrills will get more engaging in this show’s third episode then, since Agent 355 is at least able to retrieve Yorick from New York, and reunite him with his mother. Oh, good, we can finally start working toward Yorick’s and Agent 355’s crucial alliance from the source comics!

Another brighter element to this episode is Hero, the one personality that does kind of start to poke at Y: The Last Man’s central conceit with her subplot. Hero holes up with her best friend, Sam, a trans man, while two other trans men also seek refuge with them, as everyone prepares to be evacuated from New York. Instead of going along with the evacuation plan however, Hero instead retrieves her dead lover’s ID to give to his grieving wife, leading to a bit of a quiet, yet weirdly gratifying resolution for these two women. Instead of going the expected route of a heated confrontation, the wife quietly accepts the affair, and Hero’s kindness, before simply walking off. It’s a subversive and nicely subdued dramatic moment that effectively plays against viewer expectation, one that’s also capped off effectively by Hero’s charitable act ultimately screwing over Sam, after the other two trans men flee, and steal Sam’s testosterone supply.

Y: The Last Man is finally moving along with its apocalypse in its second episode, but the series still just isn’t that entertaining at this point. It remains too dull and derivative to leave much of an impact, creating another squandered chance to hook audiences that are mostly burned out on this genre of television. It is a little refreshing to create an apocalypse that’s built on something other than zombies or the elements, or even evil humans for a change, but not even that interesting grounded touch can elevate Y: The Last Man to the necessary standard of being able to stand out in an overcrowded TV genre. There’s still one episode left among the initial batch, but at this point, my hopes aren’t high. At this rate, Y: The Last Man is taking too long to get going, and it’s still in danger of bleeding too many viewers to survive with its sluggish first offerings.

Y: The Last Man Series Premiere Part 2 - "Would the World Be Kind" Review
Y: The Last Man gets its apocalypse going in its second episode, but the series is still too derivative and sluggish for now.
THE GOOD STUFF
THE NOT-SO-GOOD STUFF
2021-09-15
62%Overall Score
Reader Rating: (0 Votes)
0%