One of the most consistent developers in all of gaming, Arkane Studios is responsible for two great Dishonored games and one very solid reboot of Prey. Now, their newest studio — Arkane Lyon — has presented us with yet another new IP, in the form of Deathloop. We’ve been able to go hands on with it over the course of several days now, and wanted to share our thoughts in review form.

When we think of Deathloop, it’s impossible not to flash back to the 1993 comedy/romance, Groundhog Day, starring Bill Murray. This is because Arkane’s latest effort is a lot like that movie, except with a much more violent, surreal and murderous twist. After all, Bill Murray’s beloved film about a day that kept repeating didn’t feature much in the way of blood, gore or death.

Things begin as a man named Colt awakens on a rocky shoreline. Dazed and full of amnesia, he’s unsure of who he is and why he’s there. Then strange things start to happen. Text clues appear in mid-air, a weapon happens to be sitting on a nearby barrel and a strange woman begins yelling in his ear about a loop, survival, and death. He will later discover that lady is named Julianna, and that she’s some sort of a rival assassin who wants to prevent him from closing some time loop. 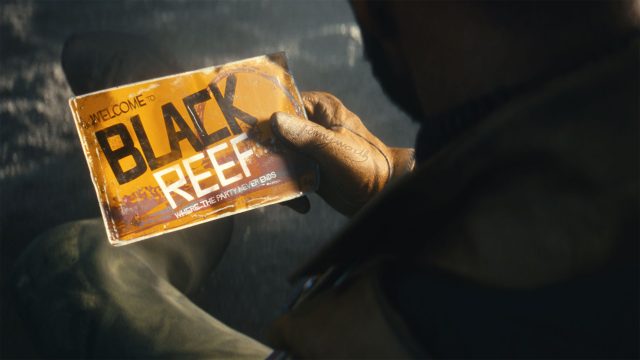 The first couple of hours of Deathloop end up being pretty slow, thanks to tutorials, story hits and lots of stealth. However, once you get past those opening beats the game really opens up and becomes a unique and rewarding specimen. Hell, there aren’t many like it, and that’s a plus for the folks who made and marketed this thing.

You’ve likely heard a lot about this game already, because it’s the talk of the industry and for good reason. That said, it’s important to go over the basics, for everyone who’s reading this review.

Deathloop is, in fact, a Groundhog Day style game. Within it, Colt must repeat the same day over and over again until he’s able to close the loop by killing eight specific enemies, referred to as ‘The Visionaries.’ The kicker is that all of these targets must be taken out within the same day, through the use of this game’s day-afternoon-evening cycle. As you’ve surely guessed, certain tasks and opportunities are only available during one part of the day, meaning that the player must be smart about how he or she goes about things.

It’s all very overwhelming at first, and I’ll admit to feeling that way for hours. Since Deathloop is new, unique and wholly non-traditional, it’ll take you some time to get the hang of. That’s okay, though, because that’s where a lot of the fun lies. Trial and error is never a bad thing, and each run you complete should net you additional knowledge, trinkets, weapons, etc. The game will also slowly teach you how things work, as you go about completing multiple ‘unsuccessful’ days. It’s helpful, too, that Colt can die a couple of times during each run, as it’s not one and done by any means.

At heart, this is a first-person shooter with stealth elements, and plays a lot like a mixture of Dishonored and Prey. Simply put, it’s very easy to tell that this is an Arkane game. The good thing is that Dishonored was great, and Prey was quite good; at least until its final act, when things became a mess. Then again, I beat Prey when it came out, and some of the bugs seemingly hadn’t been ironed out. The whole game taught me to take things slow, avoid confrontation and stockpile items, weapons, bullets, etc. by hacking and being stealthy. Then, the last third threw everything but the kitchen sink at me and made me fight enemies I’d been taught to avoid, leading to a quick loss of ammunition. I eventually beat it, but it was a pain in the ass.

Anyways, Deathloop plays like a mixture of those two games, but is more Dishonored-like than anything. It allows you to travel to, explore, and revisit several different parts of one Blackreef Island, over the course of a single day. The goal is to learn routes, discover passcodes and find secrets as you play. Furthermore, progress will also net you special abilities, through slabs dropped by special enemies and discovered trinkets.  The former give Colt amazing abilities, while the latter provide him with upgrades for himself and his weapons. These can all be toggled on and off while you choose your loadout for the next day’s attempt. 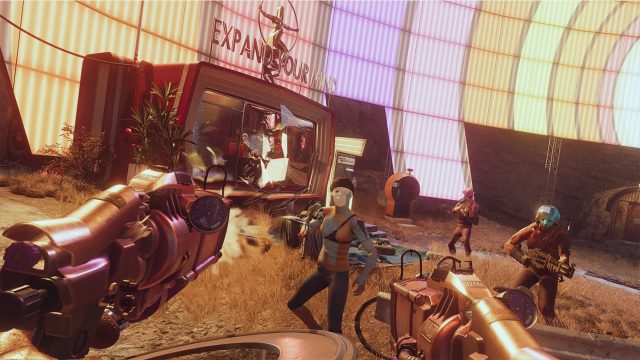 Some examples of trinkets include being able to dole out greater amounts of damage from behind, the ability to regenerate health, a larger magazine for a weapon of choice, faster reloading, the ability to move faster while reloading and increased accuracy. Meanwhile, slabs offer things like exploding enemies, health from damaging enemies, projectiles that hone in on targets and a teleportation ability that reminded me of Dishonored‘s. These all provide player choice, and allow said player to create a version of Colt that fits their play style. Stealth is one, but guns-a-blazing is another option.

It’s important to note that Colt can also carry different types of grenades, including the always helpful thrown kind, tripwires and proximity mines. He can also equip three different guns in one loadout, choosing from firepower that was discovered during previous loops. There are submachine guns, shotguns, pistols, and more.

Don’t worry if the game won’t let you keep what you’ve discovered during its early portion. You won’t unlock the ability to do so until later on, nor will you be able to harvest energy from the world around you. This is unlocked once Colt finds a special gadget during his first Visionary hunt. Once you do get these options, though, you’ll be able to farm runs and create interesting and more powerful loadouts.

The same is true of things that have a colourful haze around them. It simply means that they’re not available at that point of time.

Speaking of time, you should also know that each area of the Island changes depending on the time of day you’re visiting during. Thus, things are rarely the same. This is to your advantage, though, because you’ll find different trinkets, meet different foes and learn the lay of the land during each period. Revisiting areas will also allow you to input discovered door codes, leading to formerly hidden routes and secrets. Be warned, though: There’s no use looking these codes up online, because they’re all randomized for each play through.

The level design is also always interesting and inventive, offering a good mix of routes and verticality. If you wish to stalk the rooftops, you can. Meanwhile, those who prefer to take the streets can do just that. It’s a lot like Dishonored in this way.

Perhaps my favourite part of Deathloop, though, comes in the form of the Hackamajig. This helpful tool allows Colt to hack cameras and turrets he comes across. Doing so will make them friendly, and will also turn them against enemies. This is especially true of the turrets, which can be an incredible help at both drawing and killing unsuspecting foes. They’re a nice, murderous distraction.

The odd thing about this is that enemies’ bodies disappear after death. You can shoot, slash (with Colt’s overpowered machette and one hit kill stealth takedowns), kick or blow up enemies. However, regardless of what you choose to do, that foe’s corpse will not remain visible. The enemy AI isn’t particularly great either, which is a definite downside of Deathloop. Sometimes they’ll react to nearby gunfire, but that’s certainly not always the case. This makes the game feel less realistic, and will likely make you see some of the enemies as dumb.

It can also be hard to tell exactly where these masked foes are. You may hear them talking, but likely won’t know where it’s coming from because their voices reach so far and end up being overly clear when they do.

There are two more important things to mention before we move on with this review:

First, there’s lots to read and listen to as you explore the isle of Blackreef. Doing so will add intel to your records, which are all visible through the cluttered main menu system. Said menu also expects you to choose your objectives, although the mechanics required to do so leave a lot to be desired. Simply put, the game’s menus are cluttered and poorly designed, making them something I tried to avoid as much as possible.

Lastly, there’s multiplayer to be found within this game, except not the type of first-person shooting deathmatches we’re used to. No, instead of tasking multiple players with fighting it out for bullet-based supremacy, Deathloop presents its multiplayer in one-on-one fashion. Players can choose to Protect the Loop, which lets them play as Julianna. This works in a Dark Souls-inspired way, because Julianna is capable of entering into other players’ games and attempting to screw things up for them. She can hunt, attack and try to kill the other player, thus potentially ending their days.

A computer controlled version of Julianna will also sometimes invade the player’s game, due to story reasons. Don’t fret about this too much, because her AI is unfortunately lacking. It’s not very difficult to take her out; at least it hasn’t been in my experience, and it’s not like I’m a pro at this.

I respect and appreciate this added mode, but cannot see myself playing as Julianna often. For one, I’m more of a solo gamer. Secondly, it’s just not my type of multiplayer. I never got into Dark Souls.

All of the above is wrapped up in a colourful, quirky and 1960s inspired world. Blackreef Island truly feels as if it’s stuck in a fashion and design time warp of its own; what with the projectors, the 60s architecture and the weird odds and ends that litter it. It’s also full of trash, for whatever reason. Regardless, the game looks nice and pops with colour, and its sound design is quite good overall. The music is fitting, the voice acting is above average and the action sounds right. The only real issue comes from the voice-location problem mentioned above.

Needless to say, Deathloop is an interesting mix of stealth, first-person shooting, puzzles and roguelike elements. While I don’t particularly enjoy the roguelike genre, outside of a couple of games, it works well here and isn’t too frustrating.

Overall, Arkane’s latest is another home run for a talented developer and its publishing partners. One you won’t want to miss.

This review is based on the PlayStation 5 version of the game, which we were provided with by Bethesda.

Deathloop Review
Deathloop is a very interesting, inventive and fun new IP, which will suck you in for a number of hours.
Visuals84%
Audio82%
Gameplay88%
Storyline88%
The Good Stuff
The Not-So-Good Stuff
2021-09-17
87%Overall Score
Reader Rating: (0 Votes)
0%