Hey, Connie’s back on The Walking Dead! Now that actress, Lauren Ridloff is finished filming Marvel Studios’ Eternals, she can return to being one of the better characters among Alexandria’s current crop of survivors. Even better is that Connie has entered an alliance with Virgil, following an ending tease from last season, which showed Virgil discovering a dirty and disoriented Connie wandering through the wilderness. The two have since formed a tight bond that has helped them both survive, but throughout, “On the Inside”, they both find themselves hunted by a whole new breed of feral human, eventually trapping them inside the ruins of a house.

This is a very cool setup for the core storyline in this episode. It has a neat old-school Resident Evil vibe that finds an interesting new way to re-frame the familiar horror trappings behind The Walking Dead. Disappointingly though, this inspired core storyline with Connie and Virgil isn’t able to fill an entire episode by itself, meaning that we frustratingly get pulled out of it every so often, and instead plunked into a duo of dull subplots that only exist to fill time. This unfortunately means that we’re once again saddled with Daryl’s increasingly unfulfilling undercover mission within the Reapers, who continue to be uninteresting foes that only serve to distract from the much more intriguing Commonwealth.

The other subplot in this episode surrounds Kelly, who quickly charges out of Alexandria once word gets back that Connie is alive. Oh good, we’re doing this tired story trope again. Ugh. Anyway, Kelly predictably gets nowhere, and is quickly found by Carol, Magna and Rosita anyway, making her initial effort to flee ahead of everybody else completely pointless in the end. So, why didn’t the show just have Kelly leave with everyone else? I get that this subplot sets up the inevitable reunion between Connie and Kelly at the end, but this entire storyline still failed to do anything interesting with Kelly’s desertion, instead quickly shrugging and forgetting about it barely two scenes in! 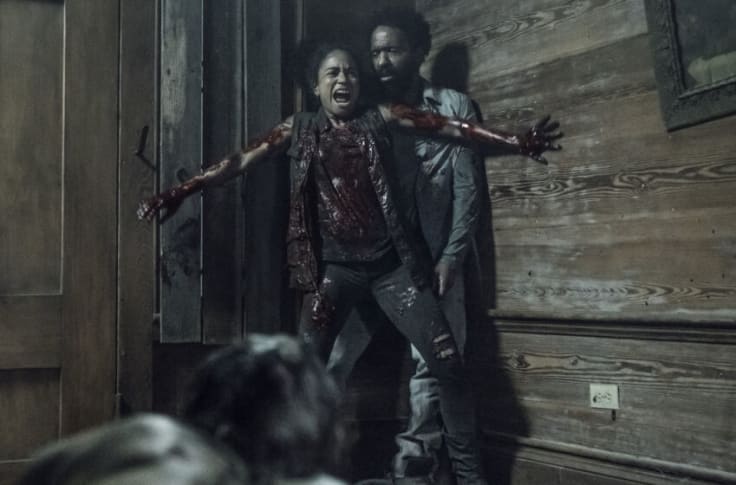 Daryl continues to be underserved with the Reapers to boot, who, like I said, are just not appealing villains so far. Daryl’s subplot at least starts off fairly engaging, with Daryl being forced to torture Frost as a way of figuring out where Maggie’s group has fled to, eventually pointing the Reapers to the house that Maggie’s group is currently holed up in. Seeing Daryl try to feign loyalty to the Reapers, or at least Leah, while covering up evidence that Maggie’s crew is nearby, isn’t completely tedious, but everything surrounding the Reapers distrusting Daryl absolutely is. Even the Daryl/Leah relationship has lost all appeal at this point! Inevitably, their mission is pointless because Maggie’s group predictably gets away, and it’s inevitable that Pope eventually kills Frost while Daryl is absent, yet another Warden death that means nothing, because we barely knew Frost.

Fortunately, the main Connie/Virgil storyline is so entertaining and so intense that it makes up for an otherwise lacklustre duo of subplots here. After Virgil forces Connie to hide in a ruined house, following the two getting chased by some unknown threat, Connie begins to suspect that the two are not alone. Sure enough, Connie is correct, leading to her quickly trying to warn Virgil that the house is infested by some kind of creatures. Virgil tries to assure Connie that it’s in her head, since Connie is traumatized and sleep-deprived, but the two nonetheless end up separated by a revolving wall (are those common in Virginia houses?), eventually leading to them being separately hunted by feral, beast-like people that have become deranged by hunger.

Like I said, the intense, claustrophobic and unpredictable chase within the house feels very old-school horror, and it’s a ton of fun to watch. Connie being deaf-mute is nicely leveraged as well, with Connie being unable to directly communicate with Virgil as a result, despite sometimes being able to see him through cracks in the walls. Virgil even nearly takes out Connie with his knife by mistake at one point, though eventually, Connie manages to rip up the wall enough so that Virgil can recognize her and pull her to safety. The two then unleash a bunch of walkers on the feral house inhabitants, before Kelly’s group takes out the rest of the feral attackers. That’s certainly convenient! Still, the long-awaited reunion between Connie and Kelly feels very satisfying, especially after such a creative obstacle that exceptionally highlights the survivor bond that Connie and Virgil have forged with one another.

“On the Inside” is completely held up by its engaging, creative core storyline with Connie and Virgil. It’s too bad that this episode didn’t know what to do with the other characters though, as Kelly’s one-woman rescue mission is quickly rendered moot, while Daryl continues to get nowhere with the Reapers and Leah. Still, it is nice to see The Walking Dead continuing to find interesting ways to experiment with its established horror tropes, even if we’re yet again deprived of the Commonwealth in this episode. On the bright side however, Connie is finally reunited with her friends at Alexandria, and not a moment too soon, considering the community’s struggles lately. Virgil likely joining the ranks of Alexandria from here also proves to be a nice lingering connection to the absent Michonne, helping to create the impression that, while veteran survivors like Rick and Michonne have since been separated into their own strange circumstances, the spirit of their actions continues to linger in the enduring survivors they’ve helped redeem.