The CW certainly made a bold move with its latest new season for DC’s Legends of Tomorrow! The network gave just over a month’s gap from the conclusion of the show’s sixth season to the start of its seventh, not only returning Legends of Tomorrow to a Fall timeslot for the first time since 2018, but also delivering one of the tightest turnaround periods in recent memory for a basic cable genre series. It’s certainly a unique way to get around COVID-19-related production disruptions so that all of The CW’s 2021-2022 season programming can get back on its regular track, while also likely allowing Legends of Tomorrow to burn through a typically shortened season so that it can quickly make room for The CW’s newest DC drama, Naomi, scheduled to debut in early 2022.

Considering that Season 6 was noticeably shakier than what this fan-favourite Arrowverse dramedy series can usually be trusted to deliver however, does Season 7 at least promise a more interesting, tightly-executed narrative this time around? Well… Sort of? I will give props to co-showrunners, Phil Klemmer and Keto Shimizu here, because they take a very big swing for the start of Season 7; An alternate Waverider destroys the Legends’ own Waverider, along with cutting them off from all of their time travel tech, effectively stranding the team in 1925 Odessa, Texas. This presents a very different, unexpected start to a Legends of Tomorrow season, shirking the usual eccentric, over-the-top season threats for a more strategic, survival-style mystery to kick off Season 7.

A cynical eye can quickly see that this is the latest method the show is using to get around its ever-shrinking budget as well. Its move to Fall does currently appear to be somewhat boosting its live/same-day ratings, which may help with the effects funding eventually, but Season 7 once again starting off with an excuse to cut Legends of Tomorrow’s budget isn’t terribly assuring. Fortunately, the show is once again attempting to compensate with its reliably fun sense of humour, as a panicking Ava struggles to thumb through a Time Bureau manual as a means of trying to cover up the presence of marooned time travelers in 1925 Odessa. Her solution is to have the Legends pretend to put on a circus, a suitably wacky solution that sadly flames out before it can go anywhere truly interesting.

Fortunately, once it stops mucking around aimlessly during the second half, Legends of Tomorrow’s Season 7 premiere starts to deliver some better, more interesting ideas as to where the season could go. These begin after Nate tries to impersonate FBI director, J. Edgar Hoover at the local sheriff’s office, in order to retrieve a black box from the destroyed Waverider, something that quickly gets the real J. Edgar Hoover on the Legends’ tails! After Astra injures herself trying to put the Waverider back together with a botched spell to boot, Hoover and his team become convinced of foul play at the Cruz house, forcing the Legends to try and lure Hoover away by becoming a gang of bank robbers. 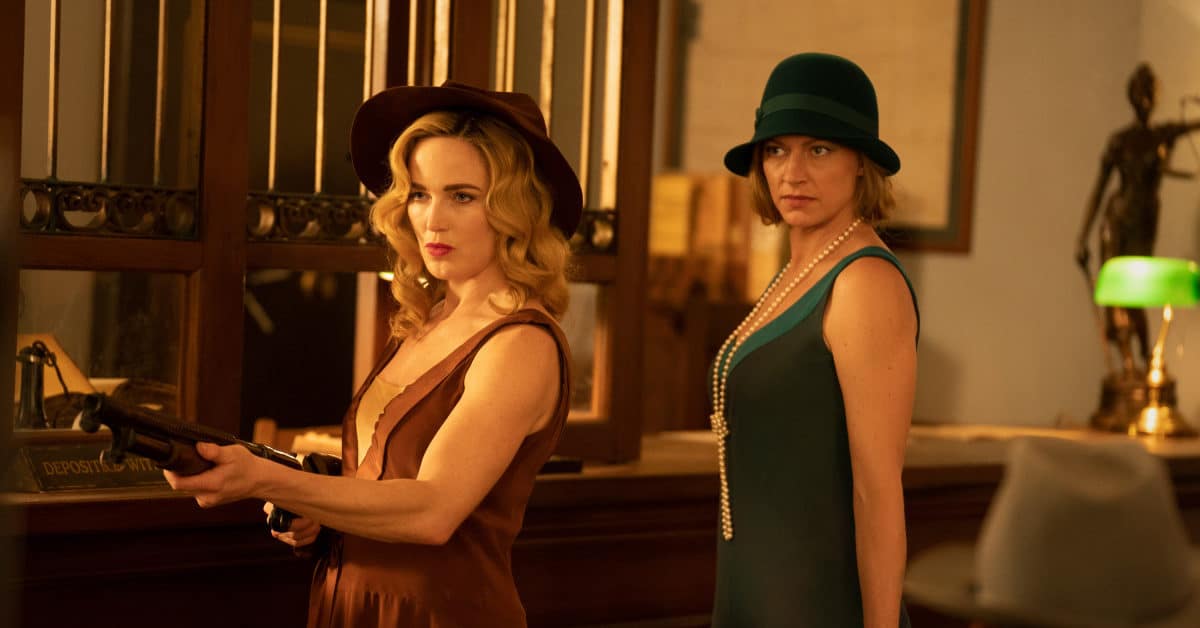 Now this is the kind of absurdity that Legends of Tomorrow thrives on! With Sara and Ava thus taking point as the Legends start building a new name for themselves (while humourously getting their own show’s title rejected because it’s, “Too wordy”), the robberies are eventually credited to, “The Bullet Blondes”, a catchy name that helps keep Hoover distracted, while the Legends try to run to New York to seek out pioneering time travel scientist, Dr. Gwyn Davies. This is of course the new role that Matt Ryan will eventually be moving to, now that he can no longer play John Constantine in the Arrowverse, presumably because of The CW’s character license expiring.

We don’t see Dr. Davies yet, but the Legends nonetheless create a very hair-raising new obstacle to the timeline while attempting to escape Hoover; After having to shake him off their car, Hoover attempts to shoot a steeled-up Nate, leading to the ricocheting bullet striking Hoover in the head and killing him! With Hoover now eliminated from the timeline far too early, the Legends have thus already made a huge mess with massive implications on history, creating a pretty awesome ticking clock for their marooning in 1925. Gary is at least able to eat Hoover’s body and eliminate evidence of Hoover’s death, but even this is a temporary solution, as the Legends are no doubt poised to create many more historical messes before they’ll have any chance at going back and fixing everything in the timeline.

Fortunately, at least one classic ally is able to come to the team’s aid, after Astra completes her failed spell in passing conversation with Spooner, resulting in the creation of a fully human Gideon. This is another big swing that Legends of Tomorrow has flirted with in the past, thanks to rare in-the-flesh appearances by the show’s Gideon actress, Amy Louise Pemberton, but for the first time, Gideon being human appears to be a more permanent state of affairs. This human transformation for Gideon also promises a genuinely exciting short-term reinvention for Legends of Tomorrow’s formula, even if the team being stuck in one time period for most, if not all of Season 7 could go either way in terms of appeal.

“The Bullet Blondes” makes a worthy effort to strip out all of the excessively contrived, ill-developed story threads from Season 6, instead refocusing Legends of Tomorrow around a simpler conflict that nonetheless maintains a solid amount of humour and excitement. That said, it’s still easy to get the sense that the show is making up its weird turns as it goes along, what with its kitchen sink approach to a Legends circus that never happens, or a peek into a Constantine pocket dimension that doesn’t currently serve any purpose beyond Zari moping over a dead relationship that didn’t make sense and was no fun to watch. As I mentioned previously, I worry that Legends of Tomorrow’s astonishingly quick turnaround period between Season 6 and Season 7 is going to hurt its storytelling potential this season. At least the Season 7 premiere seems to tease some genuinely fun developments to come though, possibly suggesting that a more grounded, but still fun approach to time travel shenanigans could be just the thing to get Legends of Tomorrow back on track.

Legends of Tomorrow Season 7 Premiere: "The Bullet Blondes" Review
Legends of Tomorrow pivots hard with the team stranded in 1925-era Texas for the Season 7 premiere, a mostly promising reinvention of the show's formula that maintains some solid fun.
THE GOOD STUFF
THE NOT-SO-GOOD STUFF
2021-10-22
77%Overall Score
Reader Rating: (0 Votes)
0%