When the world was first shown the long-awaited Nintendo Switch OLED Model, the Kyoto-based company had another surprise in store: Metroid Dread. The game actually sort of saw the light of day about 15 years ago, when development seemed to first start. Of course, after that long a time, it seemed like the game had faded into oblivion.

It seems that the game may have instead taken on Nintendo Fellow Shigeru Miyamoto’s famous line: “A delayed game is eventually good. A bad game is bad forever.” This delayed game, well, it’s real good.

Dread begins with heroine Samus Aran setting out to investigate a mysterious force on Planet ZDR. The planet is exactly what you would expect for a Metroid title: incredibly claustrophobic, seemingly eradicated of any life whatsoever, despite an onslaught of creatures to defeat. It’s a very melancholy, to-the-core kind of dread, not one fraught with jump scares, but with eerie psychological terror. Which is incredibly difficult to achieve playing on a seven-inch screen in the middle of the day. Yet, somehow, Metroid Dread conveys exactly that feeling.

Visually, it would be easy to discount Dread on its screenshots alone. There’s no shortage of 2D games using 3D character models and level backgrounds to bring some depth to its scenes. However, Metroid Dread does it so successfully thanks to a wonderful use of particle effects, smoke, lasers, light and shadows, that while you know you can essentially only go up and down or left and right, subconsciously, your brain is telling you that Samus is freely exploring the world in every dimension.

Gameplay is bundled up into a nice side-and-vertical-scroller and combat feast. The mix of Samus’ classic Morph Ball and Charge Beam of course make their return, while an almost-too-complete assortment of weapons is at your disposal.

This is all very interesting considering the fact that Metroid Dread is, at its core, a platform. A quasi-2D game, verticality like that of Super Mario Bros. 2 in that it just works, and otherwise basic but nuanced controls. Puzzles add a bunch more intrigue to the game than a truly traditional platform, while bosses can be as challenging as some of the most difficult ones in Cuphead. The latter being that you’re basically never too powerful to run and gun the entire thing, and you’re certainly not going to be able to do so on your first try. 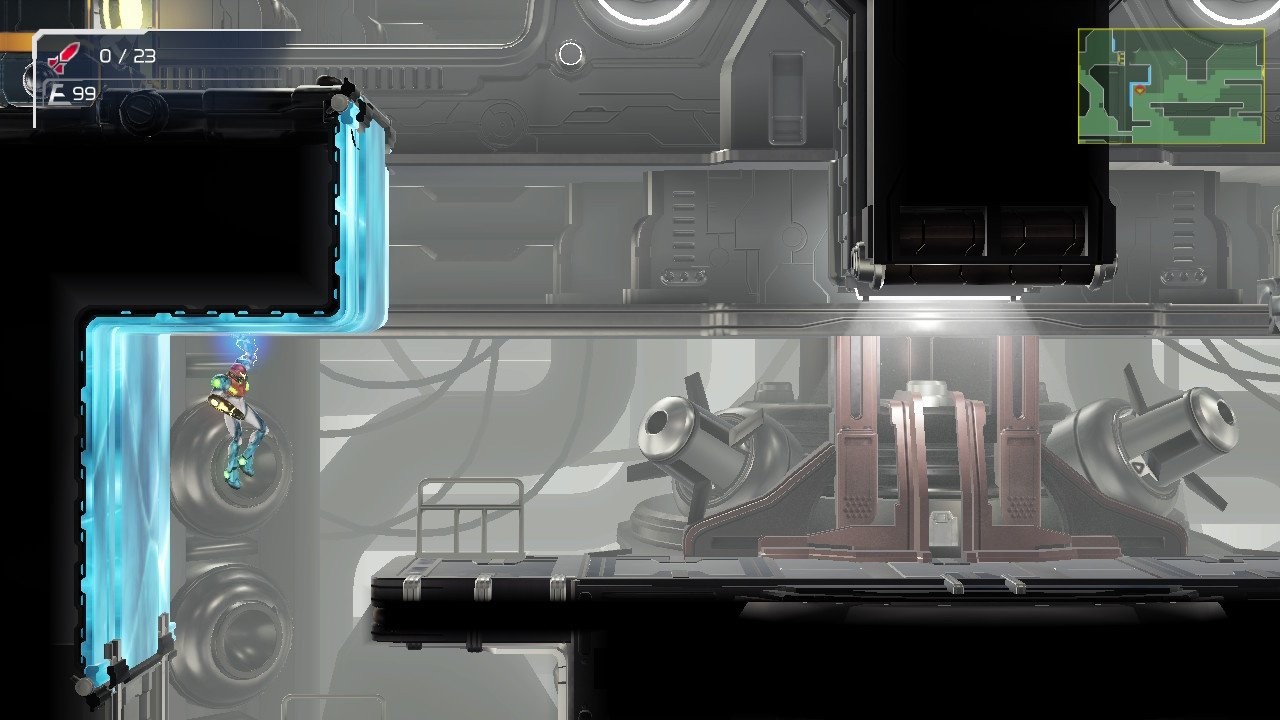 That being said, it wasn’t too difficult to get stuck in a few places. There’s incredible emphasis on playing the game holistically in a sense. Without paying attention to the level structure as a whole, it’s very easy to fall into the trap of thinking you can rush through things, and doing so will only put you in a worse position. By the same token, sometimes the path forward is literally shooting through a wall that has no indication that it is destructible. And that makes for more of an annoying game than a strategic one.

A huge–and quite often understated–factor in this feeling is the audio mix. The whirrs of machinery and creepy foreign noises from monsters lurking about all contributes to the incredibly inescapable feeling of, well, dread. It’s impossible to express this in any way other than by playing the game, so please, if you have the opportunity–and the stomach–please play this in a dark room with headphones on. Somehow, playing on the handheld close to your face is more eerie, in my opinion, than stretched out on a 65-inch TV halfway across the room.

With the exception of a few nagging issues here and there, mostly to do with level traversal, Metroid Dread otherwise delivers an incredibly complete game with the ability to frighten and terrorize players on a handheld console, something that doesn’t really sound like it should be possible. It’s an achievement that didn’t appear possible on the scale that it is, and is a game that all Metroid, platformer, and eerie, scary, horror fans alike should experience.