The spooky season has come and gone, but it’s left some treats for us to enjoy. This includes horror movies like Antlers and Halloween Kills, but also extends to the interactive world, with games such as The Dark Pictures Anthology.

Yes, Supermassive is back for a third straight year, with another entry in its series of standalone horror games. This time around, it’s The Dark Pictures Anthology: House of Ashes, starring Ashley Tisdale of High School Musical, The Suite Life of Zach and Cody and Carol’s Second Act fame. It’s an odd choice to say the least, but she did a decent job with what she was given.

Last time around, Little Hope sent us to a creepy ghost town, where historical witch hunts bled into modern day life. It differed a lot from the small settlement on the normally sunny Iran/Iraq border, where House of Ashes takes place.

Set in 2003, during America’s War on Terror, the third installment of this dark and atmospheric, choose-your-own-adventure series centres upon a small group of soldiers. After a cryptic and confusing opening involving ancient tribes, war and curses, it picks up in a rather picturesque castle of sorts, which the American Army took over from Saddam Hussein. There, it introduces us to group leader Rachel King. We meet Tisdale’s face scanned and motion capped character on a bad day, because she is surprised to learn that her estranged husband (Eric) has arrived to take control of her small regiment. Why? Well, after a long period of research, Eric King believes that he has spotted an underground bunker housing Saddam’s much talked and worried about weapons of mass destruction.

After meeting the crew, getting to know their personalities, and learning that Rachel has moved on from her once great marriage, we then travel to a very remote part of Iraq. There, the soldiers contain and question civilians, before the shit hits the fan by way of gunfire. This happens because the group’s choppers were spotted and tailed by an angry Iraqi commander and a group of bullet-loving grunts. Thus results a gunfight which causes unnecessary bloodshed.

Unbeknownst to the combatants, including those there to find the entrance to the much sought after potential bunker, something evil lurks beneath the surface, and it’s awakened by bloodshed. Its stirrings then shake the ground, causing earthquakes and worse, thus leading to some of the soldiers falling into the depths of the earth.

Upon awakening, the digitized cast finds itself in a strange castle or tomb of sorts, which happens to house many sandy tunnels. Decayed and crumbling, it’s also not the most stable location by any means, resulting in a great need to watch one’s footing. They then learn that they’re not alone, and discover that their lives are more at risk than ever before.

As with the previous two games, as well as Supermassive’s incredible PS4 exclusive, Until Dawn, The Dark Pictures Anthology: House of Ashes is essentially an interactive movie. The choices you make, and your decided upon actions, will affect whether Rachel King, her husband, two fellow marines and one unlucky Iraqi soldier, who’s been ripped away from his son’s eighteenth birthday, will survive. Failure to make the right decisions, complete quicktime events, press buttons along to a character’s heartbeat or shoot enemies may result in characters’ deaths.

I was able to save four characters, and kick myself for losing the one that I did. I got greedy at the end, and made the wrong choice.

You’re likely wondering how gunplay factors in, since this is a game about soldiers, it’s never factored into The Dark Pictures Anthology before, and I mentioned it above. Well, it’s pretty simple. You’ll be prompted to aim, and if you move the cursor to the right spot and press the right trigger before the timer runs out, you’ll shoot the bad guy or whatever else you’re aiming at. It’s weird walking around in third person with visible guns that are rarely used, but this isn’t a shooter by any means. 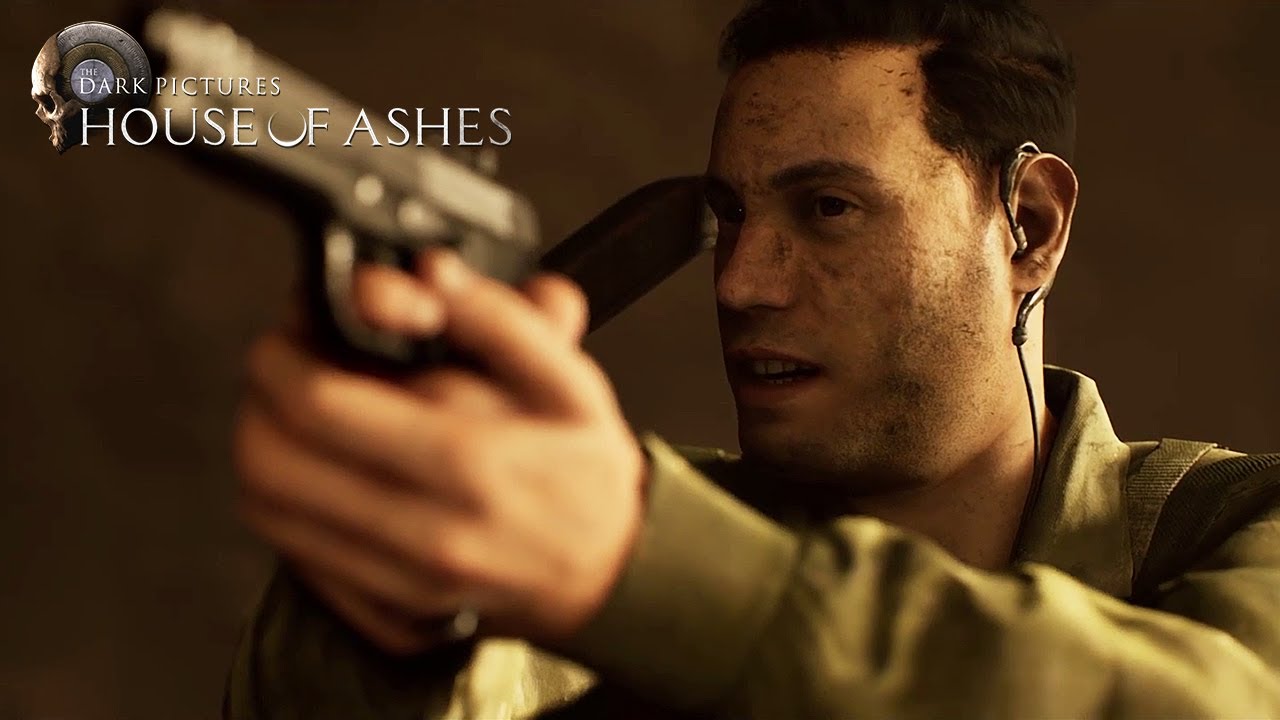 I appreciated the themes of humanity, love and teamwork that permeated throughout House of Ashes. It did a good job of humanizing the other side, despite being an American-focused game (despite the developers being UK based). After all, even those of us who aren’t American know how much 9/11 continues to hurt that country and its citizens. It’s more than understandable, too.

There was some nice depth to the cast of human-inspired characters, all of whom were scanned into the game as digitized actors. However, I didn’t identify with the game’s war-based, military focused and foreign set experience as much as I did previous entries, and the same was true of its mostly forgettable characters. It’s decent and has some good moments, but it can be kind of boring, and had me wishing it would end after a while.

For the most part, the cast did a pretty good job of portraying their characters. Don’t expect anything close to award winning, or even necessarily A level stuff, though. This is more of a B-monster movie than anything else. It also borrows surprising elements from vampire fiction and movies like Alien and The Thing, both of which it doesn’t come close to comparing to. As such, its originality is a bit suspect.

Simply put, there’s just not enough to House of Ashes. The choices weren’t as memorable, and I didn’t notice as many major or noteworthy ones as I did in previous games. There were also too many periods where I was tasked with doing boring things like exploring a perimeter, looking for gas cans, fixing a generator or things like that. Pacing is a definite issue as a result.

Presentation is another so-so area for this game. While it can look really nice during sunlit segments, including the aforementioned shootout, the character and texture details fluctuate throughout what is a maybe five hour long game. Sometimes they looked quite nice and pretty lifelike, but at other times it felt like I was playing an early Xbox One or late Xbox 360 game. The textures would lessen greatly, for whatever reason.

Furthermore, there was an annoying issue with the Xbox Series version of the game, which caused it to repeatedly pause. This would happen if I exited and spent time in the store, or on another app like the browser. It corrected itself one time, after I hit pause enough times to get to a cutscene, but I wasn’t as lucky the previous three times. Each time, I tried to quit to the main menu, but would end up with a frozen image.

If you’re a fan of Supermassive Games’ work, including The Dark Pictures Anthology: Man of Medan and Little Hope, and Until Dawn, you may want to give House of Ashes a shot. This is especially true if you’ve liked the previous two games in this series. However, I’d be lying if I said that I really enjoyed this one, or got immersed in it, because I didn’t, and that was disappointing. At the end of the day, it’s a flawed, buggy and wholly mediocre experience, which isn’t very scary. It does, however, have a nice tie in to Little Hope.

Here’s hoping the fourth game, and season one finale, will be better. It looks to be about serial killers and maybe even zombies.

This review is based on the Xbox Series version of the game, which we were provided with.