Fear the Walking Dead seemingly did the impossible and rebounded from its shaky rebooted direction last season. This is the result of a strategy that seemingly has Fear the Walking Dead abandoning any actual effort to be taken seriously, and leaning full-tilt into comic book-style storytelling as a way of exaggerating the engagement and the melodrama. Considering how frustratingly dull so much of AMC’s Walking Dead TV universe has become in recent years, it’s actually not a terrible plan. This revised approach also meshed well with an anthology-style direction in Season 6, which shifted the spotlight to different characters across every passing episode. Then the show made the shocking decision to nuke most of Texas, immediately transforming Fear the Walking Dead’s landscape into an irradiated hell that quickly promised major changes for the then-upcoming Season 7.

The problem is, this Fallout-style revamp for Fear the Walking Dead already feels tired, and the show’s anthology trick so far doesn’t seem to be working twice. This is despite, “The Beacon” kicking off Season 7 with another major change to the series’ status quo, namely as Strand takes center stage for the season’s first episode, seemingly being poised to be re-tooled into an arch-villain for the season. This major shift for Strand’s character doesn’t feel completely inexplicable, as he’s been a self-serving wild card character since Fear the Walking Dead’s very first season, but considering that the series’ rebooted storytelling seemed to want to portray Strand as more of a tragic anti-hero over the past few seasons, it does seem a little bit strange that the narrative has once again pivoted to embrace Strand’s selfish side.

This season premiere works overtime to try and make Strand’s latest character evolution have far-reaching effects as well. Despite the fact that Strand is supposed to be the central character of this season premiere, the story’s main perspective is instead seen through the eyes of an all-new survivor named Will. Will is the last remnant of a community that Teddy’s scouts obliterated right as the bombs dropped, and he’s since struggled to eke out a living from a van, while irradiated walkers and general radiation hazards surround the vicinity. That’s par for the course, considering how Season 6 ended, but when Will inevitably ends up in the company of Strand, he also divulges that a mysterious group of new survivors, whom Will dubs, “Stalkers”, are stripping walker corpses for unknown reasons.

Another key mystery within Season 7’s early stretch is the whereabouts of Alicia, who seemingly escaped her confinement in the Franklin Hotel’s bunker. Even more intriguing is that Strand eventually compels Will to reveal that he was acquainted with Alicia, and that part of Will entertaining Strand’s company is to create some kind of gesture for Alicia, who supposedly cast Will out of a different community. Okay, the idea of Will knowing Alicia is well and good, but this setup already feels a little convoluted. The viewer can somewhat suspend their disbelief about Strand somehow having a full-fledged survivor community right at the start of this season at least, complete with modern comforts, in, “The Tower”, the one place in the vicinity that’s somehow untouched by nuclear fallout, which feels pretty damn lucky, if not outright contrived. Regardless, Will and Strand being forced together on a hunt for Alicia quickly begins to feel overthought, even as the two men try to create excitement by taking on irradiated walkers. 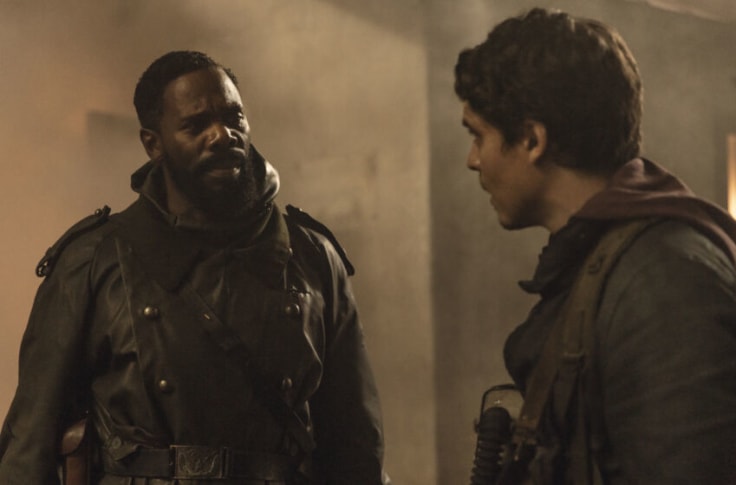 Another problem with this season premiere is, so far at least, the nuclear wasteland hook doesn’t feel as exciting as the showrunners probably hoped it would be. At worst, it even feels like Fear the Walking Dead may have written itself into a corner with this whole nuclear apocalypse hook. The nuclear-fueled sense of solitude and dread kind of works sometimes, but Fear the Walking Dead has leaned so heavily on radiation-themed threats over the past couple of seasons that it doesn’t really register as being scary anymore. It just feels old hat. Granted, Season 7 has only just begun here, and it’s entirely possible that the show could find something genuinely cool to do with the irradiated Texas in the episodes ahead. So far though, Will and Strand spend entirely too much time wandering aimlessly and talking in circles, and this leads to a season premiere that feels more sluggish and tired than it probably should.

I do however appreciate the way that this season premiere ends, even if it naturally refuses to answer the question surrounding what’s up with Alicia, and how she seemingly played a part in Strand’s downfall to villainy. When Will tries to appeal to Strand’s better angels, suggesting that Strand could still reconcile with Alicia, and Morgan, and everyone else that he was formerly allied with, Strand eventually throws Will off the roof to his death! This is a legitimately shocking way to solidify that Strand has truly gone off the deep end, plus it also makes for a decent curveball in the sense that Will felt like a new protagonist for Strand’s faction, only to be killed off in the season premiere, simply for the crime of believing in Strand. This darker, more irredeemable Strand portrayal may feel a little forced to some extent, but if the season can fully commit to making Strand a villain, and setting him up for an epic clash with Morgan, perhaps the hostile new world of post-nuke Texas could serve as a genuinely compelling new backdrop for Fear the Walking Dead, eventually.

Fear the Walking Dead hasn’t entirely lost its renewed creative stride in the series’ Season 7 premiere, but the show is still mostly ridiculous at this point, plus it’s less engaging than most of Season 6 was so far. The show setting Strand up as a new arch-villain could be intriguing over the course of this season, but Strand’s character has become so muddled by this point that his tragic fall doesn’t completely land with as much drama as it could have, even if Strand throwing Will off of his roof does prove to be a strong note to end this season premiere on. Since Fear the Walking Dead remains committed to its anthology-style narrative in Season 7 as well, we’ll probably have to wait and see how everything shakes out from the perspectives of the other characters, assuming most of this show’s protagonists did manage to successfully survive the nuclear devastation.

Fear the Walking Dead Season 7 Premiere: "The Beacon" Review
Fear the Walking Dead takes another big swing with a nuclear wasteland hook in the Season 7 premiere, one that tries to turn Strand into a full-blown villain with mixed results.
THE GOOD STUFF
THE NOT-SO-GOOD STUFF
2021-11-08
72%Overall Score
Reader Rating: (0 Votes)
0%