NOTE: Full spoilers for this episode of, “Y: The Last Man” are present in this review

After the previous episode of Y: The Last Man once again neglected the PriceMax storyline, the series took its latest opportunity to go all in on the perspective of Roxanne’s group, finally christened in-universe as the Amazons within this episode. “Ready. Aim. Fire.” picks up with the growing tension between Hero and Sam, as well as Nora and Roxanne, while also peeling back the shocking layers of Roxanne’s backstory, and how she eventually came to be this survivor group’s supposedly fearless leader. In a creative twist as well, Roxanne’s origin story is told in reverse here, starting with the Roxanne we recognize, and eventually giving way to a character that we realize we never knew at all.

This of course ties back into Y: The Last Man’s focus around examining gender and the lingering gender-fueled corruption of our modern world, and how it both stands and crumbles to varying degrees, now that all of the world’s cisgender men have died (save for Yorick). Roxanne very transparently appears to take inspiration from pop culture’s macho survivalist kingpins, such as The Walking Dead’s Negan or Mad Max: Fury Road’s Immortan Joe, for example, but the show deconstructs the viewer’s expectations to surprisingly excellent effect throughout this episode, eventually revealing Roxanne as nothing more than a downtrodden assistant manager at PriceMax, who carefully cultivated her image and cult of personality through a combination of loneliness, desperation and a lot of luck. Honestly, the Roxanne origin’s similarities to Negan’s backstory in the Walking Dead franchise can still be pretty striking here, though Roxanne’s backstory is of course presented from a more grounded female perspective.

There’s almost a darkly funny aftertaste to finally seeing Roxanne for who she really is as well. She was never a cop, let alone a homicide detective. She stole most of her lines and career stories from Law & Order, in fact! Some elements of her backstory are nonetheless true, such as Roxanne formerly having a husband named Eddie that left her, and Roxanne losing a breast to cancer, among a few other small details, but Roxanne the survivor leader is definitely a facade, one that she does everything in her power to keep away from the women in her charge. This of course includes Hero, whom Roxanne continues to take a liking to, but Nora and Sam eventually end up alienated, with Sam ultimately leaving the Amazons of his own volition.

If there’s one drawback to this episode, one that easily marks a new high point for Y: The Last Man so far, it’s the fact that the Hero/Sam conflict ends up getting sandwiched into the much more interesting storytelling surrounding Roxanne and Nora. Hero’s and Sam’s tension eventually comes to a head after Sam inevitably tires of Roxanne’s aggressively misandrist rituals, ultimately convincing Sam to abandon the Amazons, without saying goodbye to Hero. Hero is naturally sad about this, and eventually parties with the other women when she decides she no longer needs Sam, or any man, and… That’s it. That’s kind of where her character arc is left in this case. That’s rather awkward, considering that Hero was becoming another highlight personality on this show during our last check-in with PriceMax, only to now once again be pushed into the background. 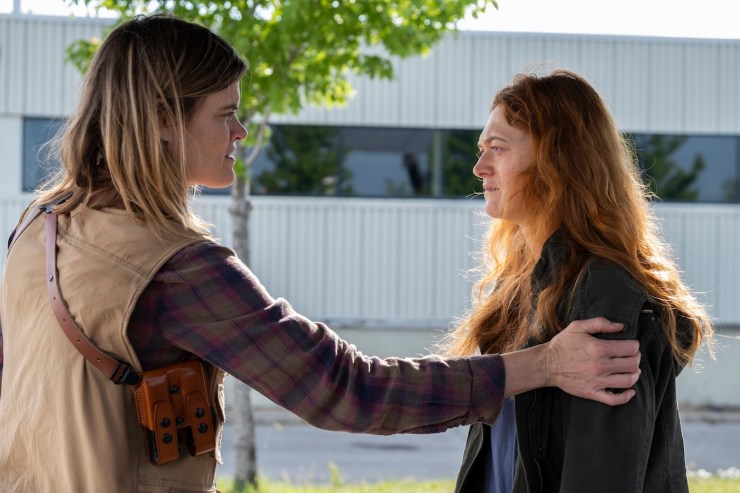 On the bright side, Hero and Sam getting the shaft allows Nora to rise as the MVP of this episode, going toe-to-toe with Roxanne by exposing her own surprising survival instincts, and securing herself a new spot in the Amazons’ highest ranks of leadership. This series of events is expertly crafted and riveting to watch, beginning with Roxanne telling Nora that she’s being kicked out of the group, and must leave with Mack in a few days. Nora wants to stay however, even being an accessory to assault after Kelsey’s beating, and Nora trying to convince Mack that they may have to go elsewhere just leads to the two getting into a fight. This compels Nora to make some big moves, after she goes for a walk on the nearby nature path, and discovers the sloppy trail of disposed evidence left by Roxanne.

Upon discovering that Roxanne lied about who she was, with Roxanne having both staged a bandit threat to a women’s’ shelter and having shot a series of innocents to pass herself off as a crack shot and a skilled survivalist, Nora decides to quite literally burn down Roxanne’s operation. Once everyone is asleep, Nora uses a trail of lighter fluid left by the unattended party fire to set PriceMax ablaze, forcing the Amazons to relocate, and forcing Roxanne to depend on Nora’s expertise, moving forward. Nora then seals the deal by revealing that she found Roxanne’s PriceMax name tag, and subsequently discovered everything that Roxanne lied about. Surprisingly though, Nora lets Roxanne remain in charge of the Amazons, on the promise that Nora and Mack get first crack at supplies, and that Nora be allowed to bolster Roxanne’s rhetoric with her political savvy. This is a genuinely brilliant turn, one that places Nora in an exciting new role within the narrative, even if it ended up coming at the expense of the seemingly more pivotal Hero/Sam arc for now.

“Ready. Aim. Fire.” presents a superb deconstruction of Roxanne’s cult of personality, and how Roxanne herself managed to create the front of a hardened survivor boss from the ruins of a big box store and a vacated police station. This episode also gives Nora her best storyline yet, showing a whole new side of Nora’s fiendish political intelligence, after Nora’s former allies ended up turning her away. Considering the disappointing news that FX has already cancelled Y: The Last Man before its first season even concluded however, it’s probable that we’ll never get to see the Amazons become the exciting survivor force that they’re seemingly destined to be at this point, but hey, this series is being shopped around, so perhaps we’ll still get a payoff to this obvious Season 2 tease eventually. That’s a big ‘if’ though, and if anything, the fact that Y: The Last Man is finally starting to become a genuinely strong post-apocalyptic drama just makes it all the more tragic that it may already be the end of the line for this long-struggling DC Comics adaptation.