With Rita having been separated into the past, Doom Patrol continued its interesting new direction in, “Bird Patrol”, as the over-arching threat behind the Sisterhood of Dada continues to mount. As usual, the eponymous Doom Patrol is failing to notice the growing danger facing their world, with Laura desperately trying to rally the team into action, all while Rita continues to defect further into her newfound life among the Sisterhood of Dada. Unfortunately, the Doom Patrol remain saddled with too many of their own distractions, as Cliff continues to evade dealing with his tremor, Vic debates whether he should have his Cyborg tech removed, Larry must decide what to do with the massive space parasite he coughed up, and Jane tries to calm Kay after her bike is stolen.

There’s a lot going on within this particularly busy episode of Doom Patrol, as the current season begins to start inching toward its overall climax. As expected, it’s the core plots surrounding the Bureau of Normalcy and Laura that make the biggest impact here, complete with a time jump in the past, which moves Rita’s storyline all the way up to 1949. This means that Rita has been in a romantic relationship with Malcolm for several decades, while Laura has since become worn down by her job of designating metahuman weapons, resulting in her distancing herself from her Sisterhood friends.

It’s cool to see Doom Patrol playing with the common DC Universe trope of world governments becoming obsessed with amassing their own armies of metahumans, specifically with the Bureau of Normalcy’s original purpose being to find and recruit as many weapons-capable metahumans as possible. Considering that Doom Patrol’s Earth-21 is said to have its own off-screen rendition of the Justice League and other flagship DC heroes, witnessing how this more recognizable DC plot device eventually weighs down Laura and the Sisterhood of Dada’s cause feels rewarding, especially when Laura is inevitably torn between her duties to the Bureau, and her loyalty to her metahuman friends. Laura hiding her own metahuman abilities from the Bureau’s agents only makes her arc feel richer and more dramatic as well.

The climactic gut punch surrounding Laura’s past is well delivered here to boot, though unfortunately, we do have to slog through quite a lot of increasingly tired drama about the other Doom Patrol characters in order to reach it. Jane fares a little better in this respect, as we see her facing the inevitable consequences of allowing Kay to reassume control of her body in the real world, particularly after the suggestion that one of the other personas stole and hid Kay’s bike out of self-preservation. The idea of Jane and the other personas facing potential obsolescence as Kay returns to full agency and lucidity is an interesting and vaguely tragic one, though considering that Doom Patrol has already been renewed for Season 4, I don’t imagine that Kay will be taking long-term control of her body in the immediate future. 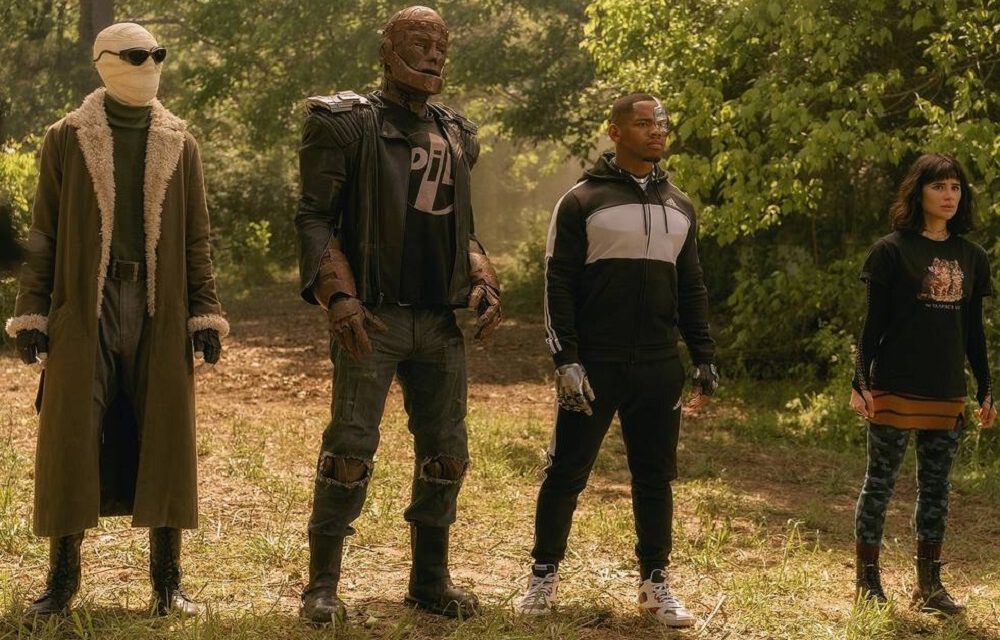 Sadly, Larry and Vic once again get stuck on the same tired plotting path in this episode, and Cliff gets sucked into the same repetitive drama this time too. Larry bringing his space parasite into the woods and leaving it supplies is a little humourous, for starters, but it doesn’t ultimately amount to anything definitive for his character. Likewise, Vic’s debate over whether or not to give up his Cyborg tech feels moot from the start, because he’s obviously not going to do that. There is a decently heartfelt conversation shared with Roni after Vic is advised to consult a loved one, but even Vic deciding to go through with the procedure doesn’t mean anything in the end, because he’s eventually forced to engage the Sisterhood of Dada alongside his teammates regardless. The same is true of Cliff, who is eventually forced to confront his daughter thanks to an exasperated Flit, only to have another humour-focused babysitting adventure that isn’t able to develop Cliff’s character meaningfully, before Cliff is just whisked away anyway. He might as well have just stayed at Doom Manor then.

Like I said, everything is eventually meant to culminate with a decisive revelation surrounding Laura, after she’s pulled into Shelley’s fog alongside the rest of the Doom Patrol (save for Rita), with the fog now having begun to spread throughout the East Coast. It’s here where the captured Doom Patrol members eventually force Laura to relive a painful memory, whereupon it’s revealed that she betrayed her friends to the Bureau of Normalcy in 1949, in an effort to professionally advance. This forced the Sisterhood of Dada to live for 70 years as weapons and tools of the government, something that also inadvertently cost Malcolm his life. Malcolm being killed during Laura’s betrayal not only handily explains the, “Creature” in the afterlife that came to Rita’s aid, which was seemingly Malcolm wearing a Dada mask that Rita made for him, but also cements Rita as an especially passionate enemy of Laura, having lost the only man she’s ever loved to Laura’s selfishness, even if Rita does manage to escape the Bureau in the past.

“Bird Patrol” suffers from a strange plot structure that leaves even more of the Doom Patrol members failing to properly capitalize on their drama, though fortunately, the core narrative surrounding Rita, Laura and the Sisterhood of Dada remains standout. Larry and Vic are in dire need of better character material though, and even Cliff has started to duck his personal responsibilities a little too much by this point, leaving his character with nothing meaningful to do but recycle the same old jokes and weirdness. I know that this cyclical effort to defy reality is baked into the over-arching theme of this season, but at least Jane was given something more interesting to do on that note, while Kay continues to find herself struggling with regaining independence. Fortunately, now that the Doom Patrol can no longer avoid their battle with the Sisterhood of Dada, their storylines can hopefully start moving forward more effectively from here, especially while one of their own remains in the grip of the enemy.