Armageddon has started to amp up as an exciting new five-episode event storyline for The Flash, but its crossover element has currently left much to be desired. Fortunately, a better crossover storyline finally made its way to the event in, “Armageddon, Part 3”, one that brings back a legacy Arrowverse superhero for another superb story turn surrounding Barry’s degrading mental state. Jefferson Pierce, a.k.a. Black Lightning, returns after the conclusion of his own CW series earlier this year, summoned by Barry from his post-Freeland retirement, after Barry demands that Jefferson invoke the, “Injustice Protocols.”

It’s here that we learn something very interesting, and a little frustrating, about the Arrowverse’s modified Justice League that was assembled in the wake of Crisis on Infinite Earths early last year; It actually has been assembling its heroes for major missions, albeit entirely off-screen. This is where the, “Injustice Protocols” apparently came from, with Barry referencing that each of the Arrowverse’s main Hall of Justice heroes assigned each other a countering hero, tasked with neutralizing and de-powering them, should they ever go rogue and threaten the safety of Earth-Prime. These protocols were apparently put together after an off-screen battle with Felix Faust, a major magic-wielding villain in DC Comics lore, and one that previously made a brief appearance in the 2014 Constantine series that was retroactively added to Arrowverse canon. That version of Faust was seemingly killed on Constantine, but it’s entirely possible that the Post-Crisis Earth-Prime either erased Faust’s death, or dumped a Felix Faust not originally based on the Pre-Crisis Earth-1 into the Post-Crisis Earth-Prime.

In any case, after one gets over the annoyance of a major Arrowverse crossover happening entirely off-screen (might this Felix Faust battle be the basis of the scrapped 2020-2021 season crossover that was originally going to be hosted between Batwoman and Superman & Lois?), Barry goads Jefferson into using Black Lightning’s electromagnetic abilities to sever Barry’s Speed Force connection, since Jefferson and Barry are assigned to be each other’s counter-heroes. Despite Jefferson’s hesitancy, he initially agrees to Barry’s request, only to eventually opt out of finishing the job. This eventually results in an enraged Barry attacking Jefferson, believing that Jefferson is not doing what’s necessary to save the world. I have to admit, this idea of Barry becoming his own worst enemy by being so aggressively determined to believe in Despero’s premonition is pretty great! I’m also glad to see that Armageddon is finally delivering a strong crossover hook, now that Jefferson/Black Lightning actually has pivotal bearing on this episode’s storyline, and is allowed to properly participate in a core plot with Barry.

Unfortunately, the improved crossover storytelling came at the expense of a slower, less fulfilling middle chapter to Armageddon on most other fronts. There wasn’t even a villain-of-the-week in this case. Instead, “Armageddon, Part 3” practically goes all in on developing the mystery behind how Joe supposedly died, and where Barry went off to. Wait, does this mean that Team Flash has no knowledge of any affairs surrounding the Hall of Justice? Why would they not think to check there otherwise? Regardless, Team Flash scratching their heads at where Barry went off to creates a subplot for Cecile, forcing her to once again recruit Rosa Dillon/Top, in an effort to locate Barry using amplified brain waves, after Chester invents another convenient gizmo. 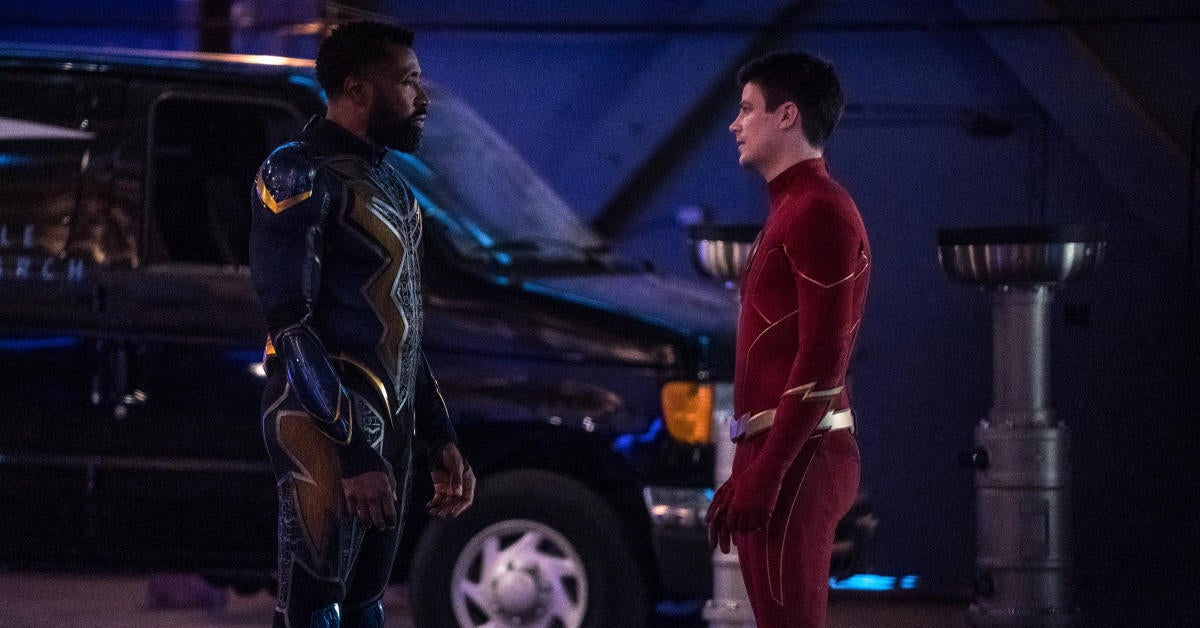 Cecile facing Dillon again is a very promising development, after Dillon previously served as the unwitting catalyst to Cecile’s major power increase last season. Even so, Dillon’s involvement in this episode’s storyline feels disappointingly inconsequential. She tells Cecile to bury her grief over Joe, something that Caitlin urges Cecile not to do, and of course, Cecile accepting her grief somehow allows her to tap into enough power to locate Barry. Take a shot. I don’t know how Cecile wasn’t acknowledging her grief before, since she’s spent a good chunk of this event screaming at her friends over Joe being dead. In any case, Despero is spiritually summoned by the surge in psychic energy between Cecile and Dillon, after activating the S.T.A.R. Labs Particle Accelerator for unknown reasons, which leads to Despero critically wounding Dillon. The show stopped short of killing off Dillon here, thankfully, but regardless, it’s disappointing that the Cecile/Dillon reunion amounted to little more than a trite Arrowverse pep talk, one that didn’t manage to land from an emotional standpoint.

Fortunately, this episode’s ultimate twist is pretty promising, even if it’s a bit of a walk to get there. While Barry is indisposed with Jefferson, Iris takes it upon herself to investigate the suspicious circumstances surrounding Joe’s death. Thanks to a seemingly doctored video, Iris initially tries to pursue the truth, only to soon after give up for the sake of cheap drama. Allegra inspires Iris again anyway, ultimately making this entire tantrum by Iris pretty pointless (take another shot), but in any case, Iris resuming her investigation eventually leads her into the company of Deon, who reveals that someone tapped into the “Negative Still Force.” I guess that’s a thing now? Regardless, Iris insists that Deon undo her time treatments, which allows Iris to positively determine that someone has meddled with the timeline, creating a death for Joe that wasn’t supposed to happen.

Three guesses who this was. Indeed, there’s only one real suspect. After Barry finally gets his head together at the Hall of Justice, he decides to run to 2031 to see how exactly the world is destroyed, at which point he witnesses an engagement party being held by… Iris? And Eobard Thawne?! Yes, somehow, Iris is pledged to marry Barry’s greatest enemy in 2031, and even worse is that Team Flash, alongside Supergirl’s Alex Danvers, Batwoman’s Ryan Wilder and Crisis on Infinite Earths’ Ryan Choi, all appear very unhappy to see Barry again in the future. This is a pretty strong ending cliffhanger, one that continues to tease some major reality ‘tweaks’ by Thawne. On that note, if Thawne’s Armageddon endgame is to steal Barry’s girl and drive Barry into a murderous, world-ending frenzy, well, he’s certainly playing the long game… Sort of. Maybe the ‘long game’ isn’t so much a thing when you’re a time traveler fighting another time traveler.

It remains frustrating to see that Armageddon is continuing to struggle with balancing an exciting narrative and a worthy crossover hook in, “Armageddon, Part 3.” This time, the crossover swapped issues from the past couple of weeks, now sporting a much better crossover hook, thanks to a strong core plot between Barry and Jefferson Pierce/Black Lightning, though outside of that, most of this episode’s narrative pacing really suffered. Even an anticipated reunion between Cecile and Rosa Dillon/Top ultimately falls flat, due to storylines that bafflingly focus on empty emotional platitudes, rather than truly heroic stakes. Iris at least manages to regain her narrative footing later on however, during an intriguing investigation into Joe’s reality-altered death, one that eventually leads into another shocking return for Eobard Thawne/Reverse Flash. The tease of Thawne being the true menace behind Armageddon is very exciting as well, especially when it continues to escalate the increasingly dangerous methods of Barry’s arch-nemesis, as Thawne is now turning reality itself against Central City’s resident superhero!