NOTE: Full spoilers for this episode of, “Hawkeye” are present in this review

Hawkeye’s two-episode premiere left Clint and Kate captured by the Tracksuit Mafia, under threat of being interrogated by a mysterious deaf-mute woman that appears to be the most serious presence among these otherwise eccentric mobsters. “Echoes” draws back the veil on this mystery woman’s identity, that being Maya Lopez, a.k.a. Echo, a recognizable face from Marvel Comics lore. This episode begins with a brief exploration of Maya’s history, being born deaf-mute to a father that appeared to be a high-ranking lieutenant within the Tracksuit Mafia, until he was ultimately killed by Clint, as Ronin, back when half of the universe’s population had been dusted by Thanos. This immediately gives Maya a tense connection to Clint, though thankfully, she’s unaware of Clint’s identity as Ronin at this point, even while the truth threatens to come out during Clint’s interrogation.

That said, Maya’s history with Clint feels like small potatoes compared to Maya’s history in Marvel Comics lore, a history that Hawkeye teases it will be honouring. You see, in the Marvel Comics Universe at least, Maya happens to be the adopted daughter of Wilson Fisk, a.k.a. the Kingpin, archenemy to Daredevil, and the central antagonist of Netflix’s Daredevil series. Vincent D’Onofrio portrayed the MCU’s purported Kingpin on Daredevil, and during a particular flashback early on in this Hawkeye episode, Maya is revealed to have a male authority figure in her life simply known as, “Uncle”, a man that is later confirmed by Kazi to still be running the Tracksuit Mafia in the present day. We don’t see Uncle yet, but we do hear him briefly laugh while interacting with a young Maya, and ‘Uncle’s’ laugh pretty unmistakably sounds like D’Onofrio’s voice. Thus, while the MCU’s Maya was already an adult when her father was killed, it nonetheless appears that D’Onofrio’s Kingpin is likely a close family friend in the MCU, one that still possibly serves as a ‘mentor’ to Maya in a sense, if he is indeed Maya’s sole superior within the Tracksuit Mafia.

At the risk of going on a lengthy tangent, this episode thus teases from the jump that Hawkeye is likely about to have deceptively huge implications for the larger MCU, even as the series unfolds on a much smaller scale than the MCU’s previous Disney+ shows. This is because, after Marvel Television folded, and was subsequently absorbed into Marvel Studios, the question of whether or not the Marvel Television-era shows were still canon in the MCU, particularly since Marvel Studios now oversees both the movie and Disney+ series arms of the MCU, quickly became a heated debate among fans. Previously, WandaVision altering the appearance and backstory of cursed tome, the Darkhold seemingly suggested that Marvel Television-era shows like ABC’s Agents of S.H.I.E.L.D. and Hulu’s Runaways, which incorporated a separate Darkhold into their storylines, may have been removed from MCU continuity by Marvel Studios. If D’Onofrio’s Kingpin is indeed behind the Tracksuit Mafia on Hawkeye however, this will inevitably change that debate. After all, it would seemingly confirm that Marvel Television’s Netflix shows at the very least are still canon in the MCU, particularly Daredevil, which previously detailed Kingpin’s history with organized crime in the MCU’s post-Avengers New York.

Putting all that aside however, “Echoes” nonetheless remains another fantastically entertaining Hawkeye episode, even if its structuring sometimes feels a bit bizarre. This episode runs leaner at just over 40 minutes, for starters, and after its early introduction of Maya/Echo, most of its subsequent runtime is built around an action-packed escape from the Tracksuit Mafia. This escape is excellently done, sporting the perfect balance of action and comedy, particularly after Maya destroys Clint’s hearing aid, thus rendering him unable to directly communicate with Kate while they’re in a getaway car. As Clint drives, Kate is thus forced to use Clint’s supply of trick arrows to repel the pursuing Tracksuit Mafia thugs, including Maya and Kazi, not knowing what any of the trick arrows actually do before they’re fired. This creates an incredibly fun and unpredictable sequence of events, brilliantly culminating with Clint using a Pym Technologies arrow to turn a regular Kate arrow into a massive, truck-destroying pillar, before Clint and Kate slip away with a plunger arrow via an underlying subway car. Nice! 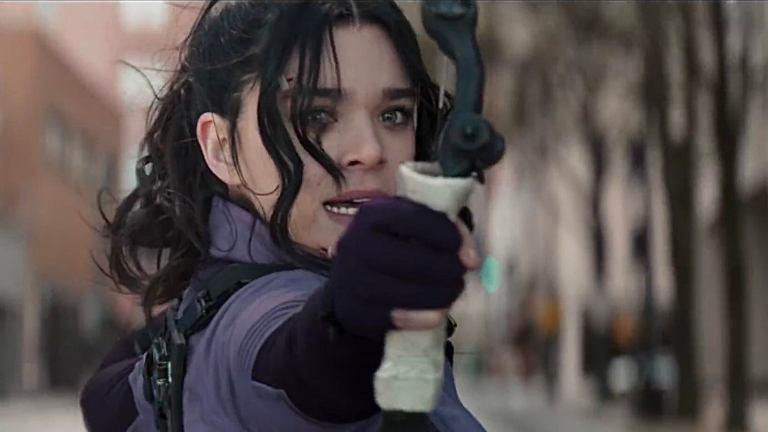 Unfortunately, once this superb action sequence ends, the rest of this episode becomes disappointingly slow in comparison. Kate and Clint simply continue to discuss Clint’s supposed branding problem, while Clint continues to be eager to ditch Kate. So, we’re kind of doing the same schtick as the previous episode then. There are still some moments that work well during these final ten minutes or so, mind you, such as when Kate uses a notepad to disguise Clint not having his hearing aid while he talks to his youngest son on the phone. Still, it feels like the outstanding momentum from this episode’s first thirty minutes comes to a frustrating stop in the final ten, while both the heroes and the villains are left to simply wonder about the implications of their recent big chase through a strangely unpopulated series of New York streets.

Eventually though, after some more mentions of, “Uncle” on the Tracksuit Mafia’s end, and how he likely won’t be happy that Maya is pursuing a very public vendetta against Ronin (this is further evidence that D’Onofrio’s Kingpin is in charge of the Tracksuit Mafia, since Daredevil established that D’Onofrio’s Kingpin is very shy, and prefers that no one knows of his existence), Clint and Kate find themselves in Eleanor’s penthouse, to try and learn more information on the Tracksuit Mafia. After Kate tries to dig up information on Kazi specifically, a character that seems to have a very blatant, yet currently undefined connection to Clint even in the MCU (this follows Kazi’s Marvel Comics history as Hawkeye villain, Clown), Clint is eventually held at swordpoint by Jack, and that’s where this episode ends.

At least we didn’t have to waste more time on Kate’s forced animosity towards Jack here, but it still feels like the Duquesne family murder mystery is struggling to keep up with the much more exciting Tracksuit Mafia vendetta, and Clint and Kate continuing to function as a surprisingly effective unit, even when they can’t directly communicate. Clint repeating Kate’s thoughts several seconds after she mentions them, after not initially hearing her, is especially charming throughout this episode, perfectly illustrating just how surprisingly fitting Kate is as a would-be Hawkeye successor in the MCU.

Thus, as much as its pacing and structuring can be a bit odd, “Echoes” continues to effectively build momentum throughout most of Hawkeye’s narrative, while also presenting what’s easily the show’s most entertaining and impressive action sequence so far. Fans of Marvel Television’s Netflix shows will also be especially stoked to see teases that they’re about to re-enter MCU canon in a big way, as evidence mounts that Vincent D’Onofrio’s Kingpin has remained active in New York’s organized crime scene, even in the post-Thanos era, and that Ronin appears to have made a bitter enemy of him. Despite Hawkeye’s cheery and festive tone, the series could be preparing to establish and re-establish some major street-level threats in the MCU, Kingpin and otherwise. On that note, Alaqua Cox’s Maya Lopez/Echo already proves to be a menacing delight, immediately cementing the appeal of her own already-confirmed Disney+ spin-off show, one that hopefully keeps developing the post-Netflix career of the MCU’s Kingpin beyond Clint’s Blip-era killing spree.