NOTE: Full spoilers for this episode of, “Hawkeye”, including the identity of the Tracksuit Mafia’s true leader, are present in this review

Despite a rather unimpressive twist to cap off its otherwise superb previous episode, Hawkeye nonetheless manages to quickly right itself again with its fifth episode. “Ronin” is another character-focused episode with a diminished spotlight on action, but it does deliver another heaping helping of awesome character work, particularly after Yelena Belova’s resurfacing in New York. This episode even begins with a rather harrowing intro, picking up where this past July’s Black Widow movie left off, namely with Yelena working to psychologically liberate Black Widow assassins across the globe. In 2018 however, Yelena finds herself dusted by Thanos’ Snap, only to instantly reappear in the MCU’s present-day 2023 (this gives us an even more terrifying perspective of what the universe’s ‘blipped’ population experienced), understandably confused about how five years have vanished in the blink of an eye.

This further develops Yelena’s character to a satisfying extent, particularly motivating her efforts to target Clint in revenge for Natasha’s death. Yelena is understandably shaken to hear that Natasha died while she was blipped as well, something that adds further context to why Yelena wouldn’t hesitate to target an Avenger, and one that also happens to be one of her late sister’s closest friends. This journey for Yelena also excellently leads into a standout scene between herself and Kate, after Yelena breaks into Kate’s apartment, and makes macaroni. The subsequent exchange between these two characters is equal parts funny, dramatic, awkward and surprisingly lovable, complete with Yelena recounting all of the things she wants to see while she’s in New York, including the, “New and improved Statue of Liberty.” This line cleverly references the recent events of newly-released MCU movie, Spider-Man: No Way Home, which takes place slightly before the events of Hawkeye.

Yelena being a major high point in this episode is hardly surprising, considering that Florence Pugh’s performance was also a major standout in Black Widow. Sadly, this episode moves on from Yelena after she meets with Kate for the most part, though with Kate having received direct confirmation that Yelena has been hired to assassinate Clint, Kate can now take it upon herself to defy Clint’s warnings yet again, and desperately try to get in touch with him. Like I said during my previous review, this immediately nullifies the weak ‘twist’ of Clint declaring that Kate is not and never was his partner, but it is at least good that the show isn’t dragging out this blatant non-issue, with Kate staying true to character by trying to reunite with Clint as soon as possible, regardless of his demands.

Clint, meanwhile, decides to take it upon himself to end Maya’s vendetta against him once and for all. There’s a decent bit of initial suspense surrounding whether Clint truly is the monster that Yelena portrays him to be, though it might have been ideal if Hawkeye didn’t have just one episode left in its current run, something that would have given Clint more room to stretch as a morally ambiguous character. Instead, Clint taking up his Ronin identity again goes through most of the predictable motions, eventually giving us our one minor action scene in this episode, once Clint manages to corner Maya, before warning her to drop her vendetta, and stay away from him and his family. Kate also intervenes around this point, saving Clint’s life again, while delivering Clint a getaway Uber in the process. Yeah, it seems like even Clint can’t be bothered to pretend that he doesn’t want Kate around anymore at this point. I can’t say I mind. 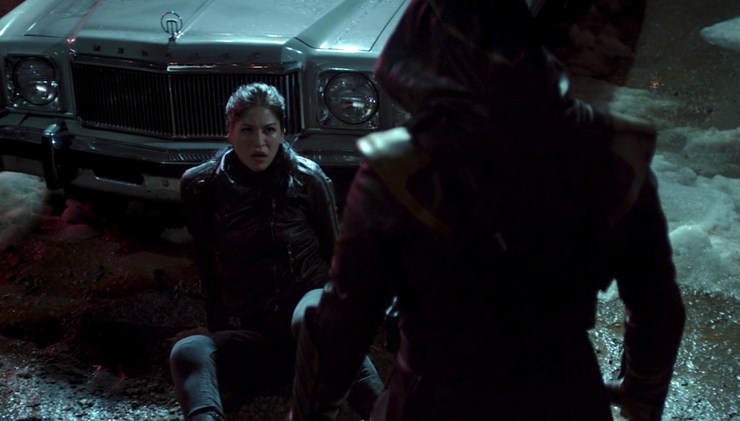 This is when Hawkeye’s fifth episode starts setting up its biggest swing though, even if leakers did ruin the surprise a bit. Then again, it’s not like Hawkeye has been terribly subtle with its teases surrounding Maya’s mysterious ‘Uncle’, and the Tracksuit Mafia’s true overseer. Thanks to a weird friendship that appears to be blossoming between Yelena and Kate, likely yet another tease for an MCU rendition of the Young Avengers (these just keep mounting across all of the MCU’s Disney+ shows so far!), Yelena tips Kate off that the person who hired her is none other than Eleanor Bishop, Kate’s own mother! Granted, this is another twist that the show tipped us off to already, after Eleanor called a mysterious business partner during Hawkeye’s previous episode, one that eventually sees Jack getting arrested in this episode. Jack may be unbothered about this arrest for now, but his case is nonetheless full of what’s almost certainly planted evidence, especially if Eleanor had something to do with Armand’s death this entire time.

Of course, when Eleanor’s true allegiances are revealed by Yelena during the final seconds of this episode, everything becomes painfully apparent for Clint and Kate alike, while also becoming blisteringly exciting for Marvel fans. As many no doubt already deduced, Maya’s ‘Uncle’, the Tracksuit Mafia’s leader, and the, “Big guy” that Clint keeps referring to, is none other than Wilson Fisk, a.k.a. Kingpin! Vincent D’Onofrio is also returning to the role of the MCU’s Fisk to boot, after originating it in Netflix’s Daredevil series. This is a fantastic development, creating a worthy over-arching antagonist for Clint and Kate during the following week’s season finale, while setting up no shortage of possibilities surrounding Fisk’s return to the MCU. Most excitingly, Fisk’s return would also appear to indicate that Marvel’s Netflix shows, or at least Daredevil, are indeed still canon in the MCU in some form, a notion that’s further supported by a similar nod to the MCU’s Netflix lore in Spider-Man: No Way Home.

While, “Ronin” was a little slower and a little less thrilling than Hawkeye’s four previous episodes, its reintroduction of Vincent D’Onofrio’s Kingpin, and its excellent fleshing out of Yelena in her post-Natasha life, still make for some superb high points. Hawkeye is also superbly primed for its subsequent season finale here, one that will no doubt pit D’Onofrio’s Fisk against Clint and Kate in earnest, while likely laying a further foundation for both the MCU’s Young Avengers team, and Maya’s upcoming Disney+ spin-off series. The prospect of Netflix’s Daredevil storylines being maintained in the MCU from here is also very exciting, hopefully indicating that the MCU’s Kingpin will remain a persistent street-level obstacle after Hawkeye’s conclusion. In a meta way, Kingpin’s MCU return also feels like a Christmas-appropriate present to enduring fans of Marvel’s tragically short-lived Netflix shows, even if I’m very curious to see how a character that formerly existed within an adult-oriented Netflix series is now going to fit into the more family-friendly mainline arm of the MCU.