Earlier this year, Milestone released what has gone on to be its most popular video game yet. That is, Hot Wheels: Unleashed; an arcade racer that mixes fast gameplay with cars and tracks that are similar to the toys that many kids grew up playing with.

In my original review, I lauded the game’s attention to detail, its chaotic tracks and its plethora of unique vehicles to drive. At the same time, I talked about how certain events were much more difficult than they probably should’ve been, even on the easy difficulty. It was that particular issue, along with how easy it can be to fly off the track and end up losing because of it, that kept me from saying that Unleashed is a downright great game. The building blocks are certainly there, but the core gameplay can be too difficult for a young audience, and has even taxed this old gamer.

Now, we’re back with a second review, which will focus on the game’s Batman Expansion DLC, along with the rest of its Season Pass One-based additions.

As is well known, few things go better with childhood than toy cars and superhero action figures. Thus, it’s a match made in Heaven here, as one of the world’s most popular comic book heroes joins forces with its most iconic toy cars. At least that would be the case if there was more to this add-on, and if it wasn’t so damned frustrating.

Hot Wheels Unleashed‘s Batman Expansion adds about ten new events, which are spread out on an adjoining map depicting Gotham City. This new location joins the bottom of the game’s main, City Rumble, campaign map, and is easily accessible from it. 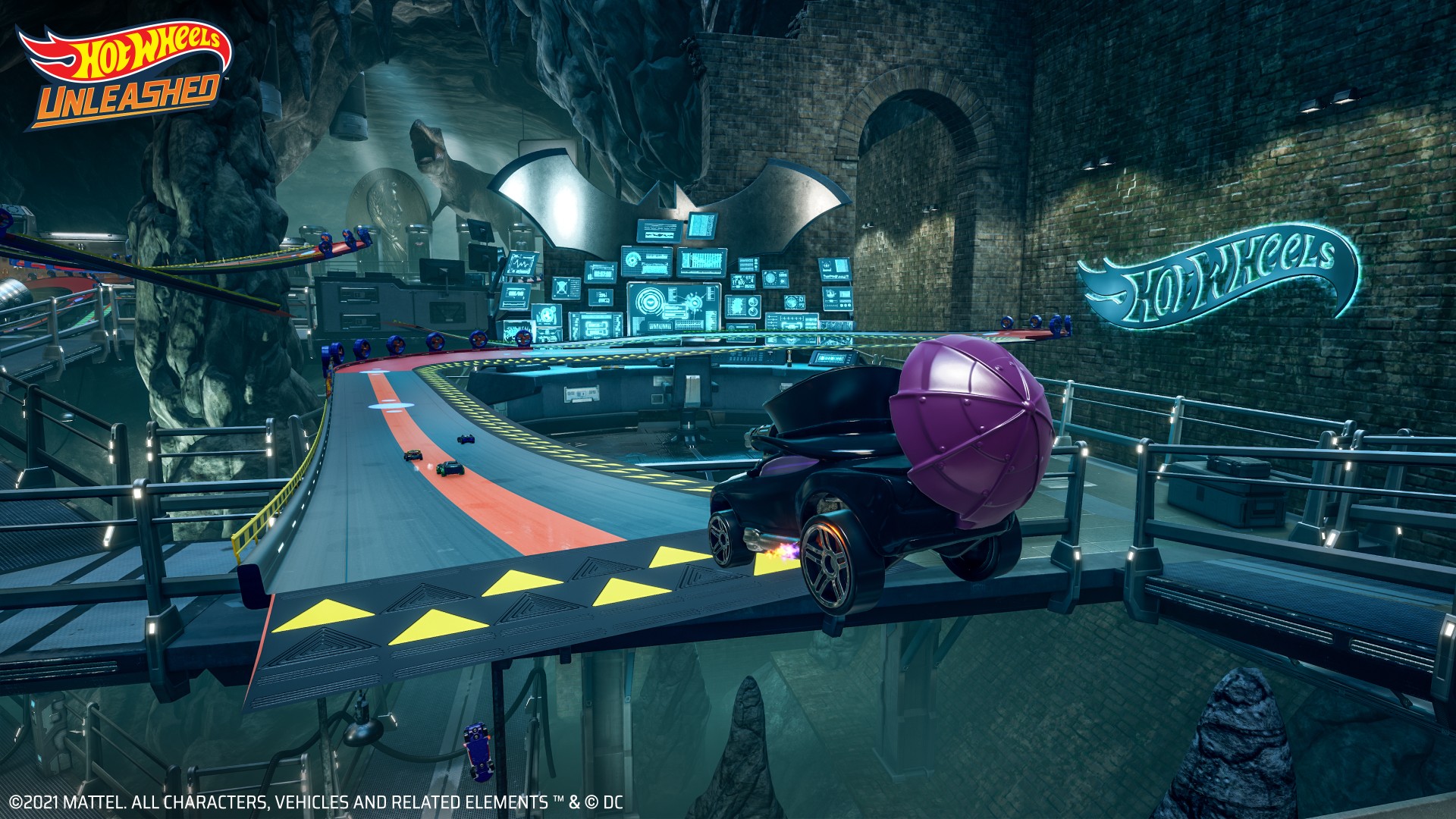 At first, you’ll start off with a fun and frenetic race through a crazy course featuring iconic Batman elements, like the Batcave, the Joker and more. The dark and brooding motif that Gotham City is known for is on full display, as are hazards depicting its most infamous clown. In terms of art direction, the team did a good job blending the two properties, and I don’t have any real complaints.

It’s after one or two more events where things get frustrating, because the map won’t let you progress until you complete three different time trials. By that, I mean that there are three different ways forward and each one houses a time trial event. If you’re familiar with how the core game’s map is laid out, you’ll understand what I mean.

I’ve played a lot of arcade racing games, and while I’m far from an expert who can beat everything at the absolute top challenge level, I’m pretty good at them. For the most part, my time with Hot Wheels Unleashed was fun and mostly frustration free, as well. It wasn’t until later on, when things became super demanding, that I honestly hit a bit of a roadblock, even on easy. I believe it had to do with time trials then, and it did again now.

Simply put, all three of those Batman-themed time trials are insanely difficult. My best runs resulted in times that were off the baseline by about 10 to 15 seconds, which is a lot in a game like this. I’m also talking about the absolute lowest time you can win with, because the Unleashed time is much more demanding, as it always has been with this title. I don’t think I stand a chance of getting those, but would like to be able to win and proceed, so that I can complete the add-on, even if it’s on easy. That’s not asking a lot, is it? This is an all ages title, after all, and some may even see it as a kids game through and through.

You know it’s bad when you do some online research, and see that people are recommending perfecting ‘shortcuts’ to beat these time trials. One shouldn’t need to do so in order to achieve the base time, but it seems almost necessary, unless you’re absolutely perfect in a game that doesn’t exactly make finesse racing super easy. 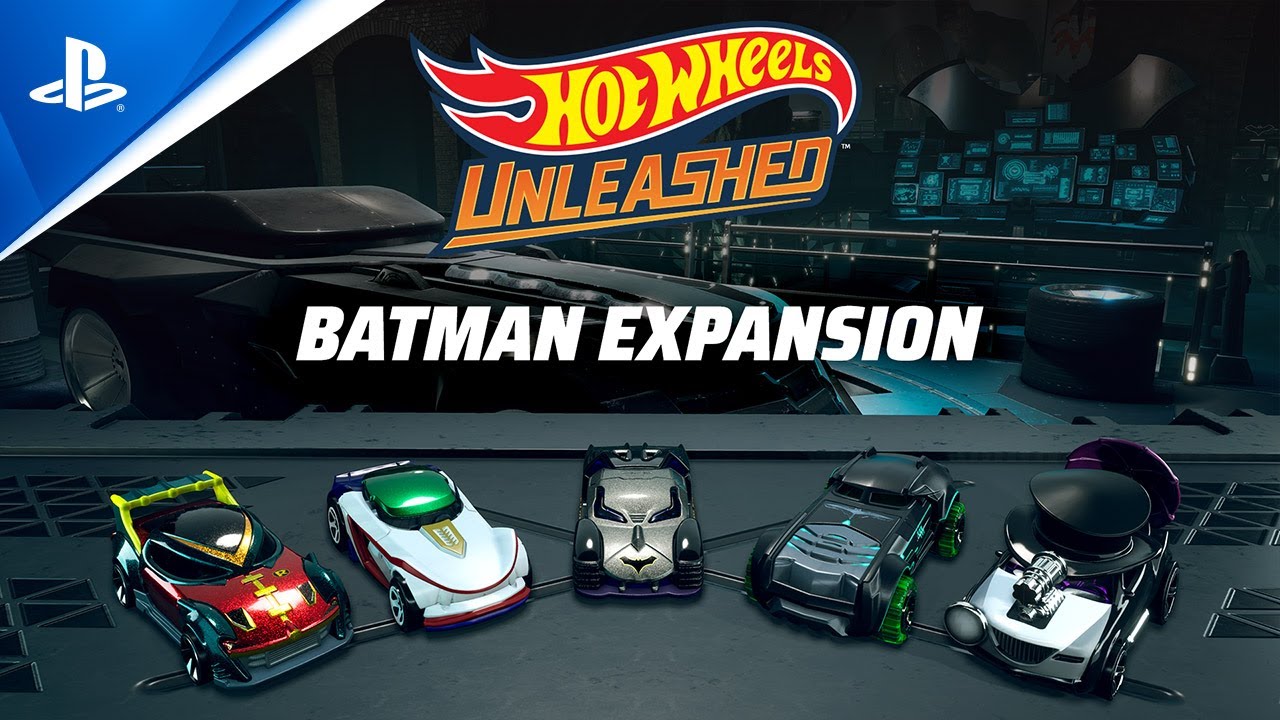 When I looked one of the shortcuts up, I was shocked. Since I hadn’t seen any typical shortcuts, I expected there was something I’d missed while playing. Something obvious that I could take to cut some seconds off of my time. However, what the guy did was essentially glitch the game by turning a jump into a flight across to a distant part of the track. He likely bypassed about a 1/3 of it, by hitting a jump, pointing upwards, and using boost to fly.

That shouldn’t be necessary, or even close to it, but people are saying that’s the best way to beat them. Hell, there are people saying that they got all of the unleashed time goals in the main game, but can’t do the Batman time trials. That tells you a lot.

I’ve himmed and hawed about whether to write this review or not, because the truth of the matter is that I haven’t seen all ten (or so) events that this Batman Expansion has to offer. I’d like to, but I don’t know if I’ll be able to complete these time trials anytime soon. I’ve been racing them with pretty souped up vehicles, too; a couple of which I’ve upgraded almost fully.

Due to the above, I chose to write something to honour my commitment, and to maybe warn those with interest that this is a very challenging add-on, at least for the time being.

We were also provided with a code to unlock the Season Pass One content, which gave me a bunch of new vehicles. A good amount of them were related to Batman, including Robin, Joker, Poison Ivy and Harley Quinn cars. Others included Bison and Blanka cars from Street Fighter, a Superman car, a Barbie Dream Camper, an Aston Martin and a Teenage Mutant Ninja Turtles themed ride based on Leonardo. Those, plus some free additions, like a Santa sleigh and a Gucci Cadillac Seville that is shockingly fast.

Some of the new vehicles were available for use right away, but others — like the Poison Ivy one, if I’m not mistaken — were locked up, as a lengthy progression reward. You’ll have to race, do well and progress through the game’s experience-based new racing season if you’d like to unlock them.

As with the rest of the cars in this game, these new additions look fantastic. The attention to detail is incredible, and I’m always amazed by how great everything looks. They really do a great job of bringing these themed vehicles ‘to life,’ and don’t skimp anywhere. From what I’ve seen, the same is true of the tracks in the Batman Expansion, although the same ones are used more than once.

Last, but not least, is the fact that Season Pass One brings new customization options for track building and for creating your own, Hot Wheels inspired dream home. In fact, in combination with the Caped Crusader, Season Pass One introduces three new customization packs (Tropical Wave, Pink Fashion and Holiday Season), as well as three new track building modules (Rolling Boulders, Spinning Tires and Dinopult). I’m not one who’s very creative, but I look forward to seeing what others will produce.

In conclusion, there’s a decent amount of content to be found within the first season pass for Hot Wheels Unleashed, including a lot of cars and a neat but frustrating Batman add-on. Here’s hoping that they’ll address the aggravating aspects soon, and that Season Pass Two will be as much fun as it can be. Apparently three of these post-launch content drops are planned.