I had never heard of Willow Rose until I was given a Kindle, and started looking at free books on Amazon. Then, I saw that she’s a prolific thriller writer, with the help of the retailer. So many books had her name attached to them, and a lot of them had really good titles and nice cover art, not to mention interesting synopses.

It helped that a lot of them seemed to go free often. I guess they’re used as loss leaders, to hook a reader before hoping that they’ll buy the rest at $4-8 a pop.

Although I was too busy reading other books, I made sure to redeem any free Willow Rose book or collection that I saw, and have even blind bought some through the Kindle Daily Deals page. They’ve always been 99 cents to $2.

Yet I hadn’t read any of her novels until now, when I decided to start So We Lie a couple of days before the dawn of 2022. It’s something I’d requested and received through NetGalley, and owed a review for.

So We Lie is a prequel to the rather lengthy Eva Rae Thomas series, which exists as just one of a few or several. Thus, it provides backstory on the character — a strong-willed, redheaded, FBI agent.

This story begins after Eva Rae has been accepted into the FBI’s BAU unit as a profiler, and centres upon a case she reopens without permission. One involving a woman who seemingly died in a fiery, single vehicle car crash, but was actually murdered beforehand. 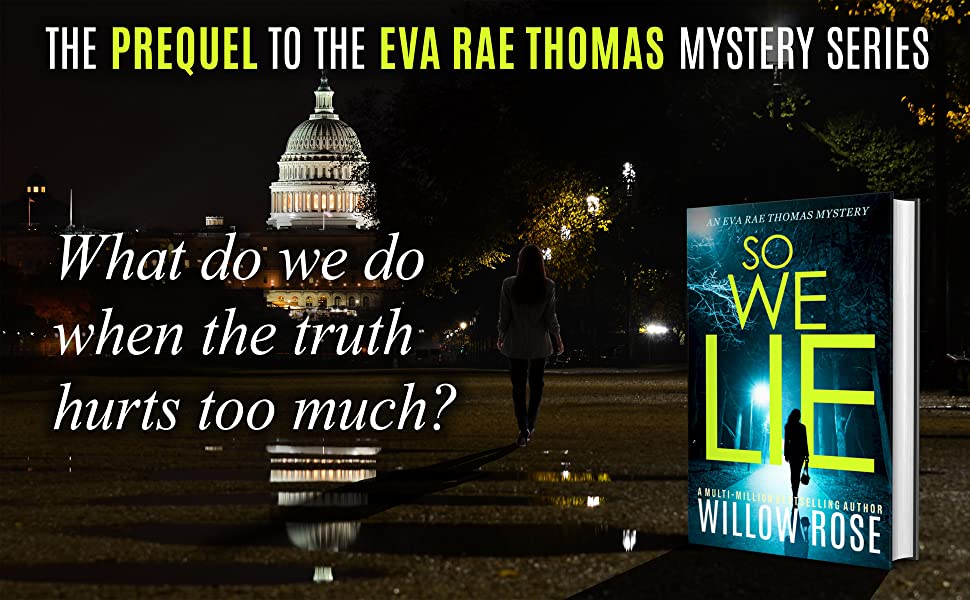 The arrested killer? Her husband, Frank.

Eva Rae has studied this particular case, and it doesn’t sit well with her. She thinks Frank may be innocent, and decides to work on it in her spare time.

In the meantime, troubles are brewing at home due to her long hours and obsession with work.

Going in, I had high hopes. I didn’t expect a Harlan Coben level masterpiece, but was excited to finally read a book by Willow Rose, whose books I had been collecting on Kindle — much like Blake Pierce’s — thanks to numerous loss leaders and good sales.

This isn’t a bad book by any means. In fact, I thought it started well, had a good mystery and was pretty easy to read and follow. That is, until I put it down for 3-5 days, then returned to read the last 20%. It was then that it started to fall off the rails.

The problem is that things are just too convenient. The ending is too easy, and feels too manufactured. It’s as if the author had a good premise, but didn’t really have a great ending in mind and just manufactured/rushed things.

A big part of this novel takes place in the past, and involves a woman who meets a handsome man on a dating app. You don’t know how it factors into the present day case, but eventually learn. Well, this didn’t happen as I’d expected, and I ended up being shocked by who the killer really was. Not in a good way, though. In a “That didn’t make a lot of sense” kind of way.

It also seemed like the main character deduced things awfully quickly at the end, and in a way that kind of jumped around or bypassed organic storytelling.

Here’s hoping I’ll enjoy her other books more, when I get to them. So We Lie was a mediocre introduction, though, and it’s too bad because the first half or more was pretty good.

*This review is based on an early digital copy of the book that I was given by the publisher, and received through NetGalley. This did not sway my opinion.*