NOTE: Some spoilers from throughout the, “Hawkeye” series are present in this review

At the start of 2021, I never would have imagined that I’d reflect on the year’s especially robust helping of Marvel Cinematic Universe-set Disney+ shows, and feel that Hawkeye was the one that rose to the top. After the mainline MCU entirely sat out 2020, on account of production complications caused by the COVID-19 pandemic, there were no shortage of promising options to fill 2021 with, as Marvel’s live-action continuity raced to make up for lost time. Thus, it’s even more amazing that Hawkeye, a series designed around the least remarkable Avenger, proved to be such a surprising standout.

What’s even more astonishing is that even a character as seemingly understated and straightforward as Hawkeye continued to lend himself to surprising and exciting genre expansions for the MCU’s growing catalogue. Designed as a Christmas caper-style series, Hawkeye somehow managed to balance a hefty air of festive cheer with a surprising degree of street-level drama, all while maintaining the MCU’s usual hallmarks of outstanding character work and whip-smart humour. Hawkeye also managed to pack in some of the most exciting MCU teases that Disney+ has delivered so far. That’s saying quite a lot in a year that also included WandaVision, a meta-style miniseries that started foreshadowing the MCU’s inevitable X-Men storylines, and both Loki and What If…?, the one-two punch of which officially unleashed the Marvel Multiverse on the MCU. 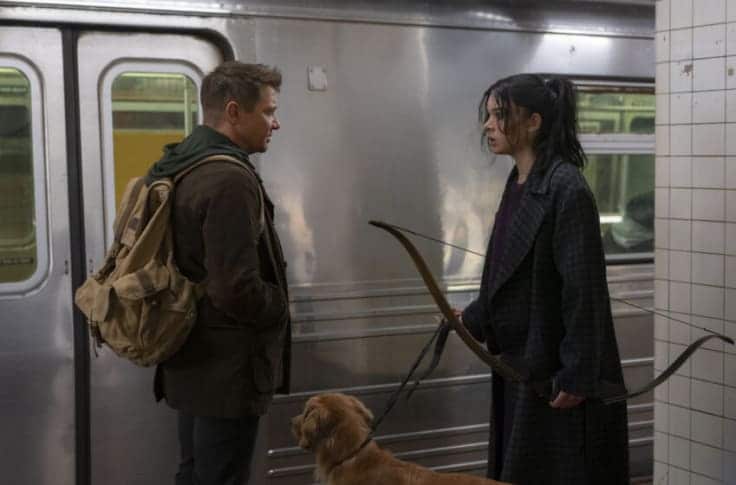 To top all that off, Hawkeye serves as the latest not-so-subtle vehicle with which to build toward the MCU’s increasingly obvious Young Avengers debut. This comes through the introduction of Kate Bishop, played by Hailee Steinfeld, a Hawkeye fangirl that inadvertently ends up in the company of her idol, after OG Hawkeye, Clint Barton learns that his Ronin suit, the vigilante costume he donned during The Blip, was stolen from the wrecked Avengers facility following Avengers: Endgame. Left with no choice but to team up with Kate, Clint takes it upon himself to reclaim his Ronin costume, along with any other stolen Avengers paraphernalia, before Christmas, whereupon he promised to make it home to his family, now that they’ve been restored from Thanos’ Snap. Things get complicated however when Clint finds himself provoking some old enemies, the Tracksuit Mafia, a gang of New York criminals that happen to be masterminded by a familiar face from the MCU’s TV past.

It’s likely been spoiled at length for anyone that has yet to watch Hawkeye by this point, so I might as well come out and say it; It’s Kingpin. After serving as archenemy to the eponymous hero of Netflix’s Daredevil series (please revive that ASAP, Marvel Studios!), it would appear that Wilson Fisk has been making an effort to double down on his power in New York City, power that he was seemingly left to consolidate unchecked after The Blip. Clint, as Ronin, ended up intruding on Kingpin’s operations off-screen during that time, leading to an exciting opportunity to bring this fan-favourite arch-criminal back into MCU canon, even if the Man Without Fear isn’t part of this particular show. Still, Vincent D’Onofrio’s Kingpin making his MCU return is very exciting on its own, in turn teasing some major possibilities for the MCU’s street-level arm, going forward.

Before that stellar payoff however, Hawkeye still delivers tons of excitement, laughs and surprises throughout its earlier episodes, all of which are a great success. Jeremy Renner and Hailee Steinfeld have excellent chemistry as would-be street heroes, with Steinfeld immediately cementing herself as a lovable presence that’s ripe for all sorts of future possibilities as a Hawkeye protegee in the MCU. These possibilities become highlighted even more following the eventual re-appearance of Florence Pugh’s Yelena Belova, first introduced in Black Widow, who targets Clint for assassination as revenge for her adoptive sister’s death during Avengers: Endgame. Somehow, Yelena also conveniently got hired by Kate’s own mother, Eleanor Bishop too, who is later revealed to be in the pocket of Kingpin, giving Kate further personal ties to the mission that she’s inadvertently gotten wrapped up in. 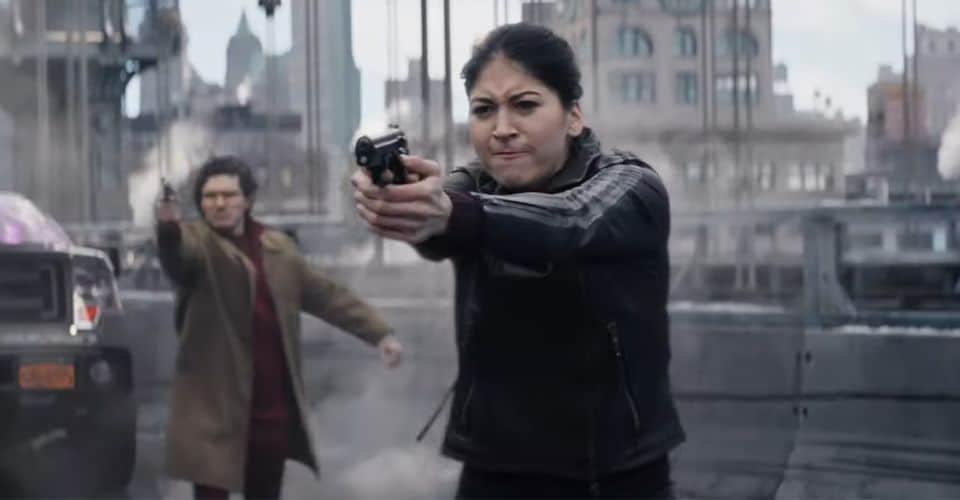 As superb as Hawkeye’s lead characters and ultimate villain frequently are though, one of the most surprising standouts among the cast is Alaqua Cox as Maya Lopez/Echo. A Kate Bishop-style protegee of Kingpin in the MCU, Maya is a deaf-mute enforcer and a high-ranking lieutenant in the Tracksuit Mafia, one that eventually becomes disillusioned with the machinations of her ‘Uncle’, particularly after she discovers Kingpin’s surprising hand in her father’s death. This is great news, since Cox has already been confirmed to return in her own upcoming Disney+ series, Echo, one that will no doubt keep building on the events of Hawkeye. I imagine that D’Onofrio’s Kingpin will continue to factor heavily into that series as well, despite a final twist in this series that appeared to see him shot off-screen by Maya. Odds are that’s a fake-out however, especially considering that Kingpin ultimately survived a similar attack by Echo in the pages of Marvel Comics lore.

At its core, Kingpin’s return to the MCU, fantastic as it is, is merely the cherry on top of a series that’s mostly meant to explore the heavy toll on Clint that’s been growing since he became an Avenger, and even since his earliest days as a S.H.I.E.L.D. assassin. It’s a little surprising in fact that Hawkeye is as cheerful and humourous as it is, considering that Clint has now lost his best friend, has mostly lost his hearing, and is now being haunted by his grief-driven time as Ronin. Much of this series’ optimistic tone is obviously shouldered by Kate, who is over the moon to be working with the Avenger she’s always admired the most, eventually reigniting Clint’s own passion as a hero in the process. This is achieved by Kate’s presence and enthusiasm emphasizing why Hawkeye was a crucial Avenger all along, specifically because he was the most human Avenger. When Kate saw Clint fighting an alien invasion with, “Sticks and a string” over a decade previous, during the Battle of New York from The Avengers, it sparked her own desire to achieve more for herself, something that became crucial after Kate’s father ended up among the many New Yorkers that perished due to the Chitauri assault.

That examination of ordinary people being inspired and influenced by the legacy of the Avengers also extends to other corners of Hawkeye’s supporting cast. This is most cutely referenced through Clint and Kate having to befriend a group of LARPers, who work by day as first responders, and ultimately find their own way to contribute to Clint’s quest, whether it’s helping procure or design equipment, or delivering intel. Despite Clint not seeing himself as a hero, and not feeling fit to believe he deserves that station, his time with Kate, and his exploration of how he’s positively changed the lives of numerous people simply through his example, Ronin or no, eventually helps Clint move past his demons. This is all the better when Hawkeye avoids the low-hanging fruit with Clint’s character, and doesn’t ultimately see him retire in the end. Instead, Clint seemingly finds the resolve to transition into a mentor-style role, one that will no doubt be important as Kate and Yelena likely serve as the first direct building blocks to the MCU’s Young Avengers.

On the surface, it’s very difficult to find anything that’s blatantly wrong with Hawkeye as well. The entire series is so lovable, fun and action-packed that it really doesn’t have any persistent weaknesses. Whereas The Falcon and the Winter Soldier could sometimes get a little pretentious, and Loki could get a little dense, Hawkeye is just entertaining throughout, with few noticeable narrative shortcomings. Perhaps the only slight gripe one could make about Hawkeye’s narrative is the somewhat wasted presence of Jack Duquesne, a.k.a. Swordsman, a mentor to Clint’s Hawkeye in Marvel Comics lore, though merely Eleanor Bishop’s fiance in the MCU. Jack is a red herring character with a mischievous bend that fits in well with Hawkeye’s tone, though his over-arching murder mystery, which sees Eleanor ordering a hit on Jack’s uncle, Armand Duquesne III, ends up being pretty unremarkable in the end. It simply exists to throw off fans, and the trick is far too obvious, especially when Eleanor quickly does a poor job of hiding her criminal affiliation. 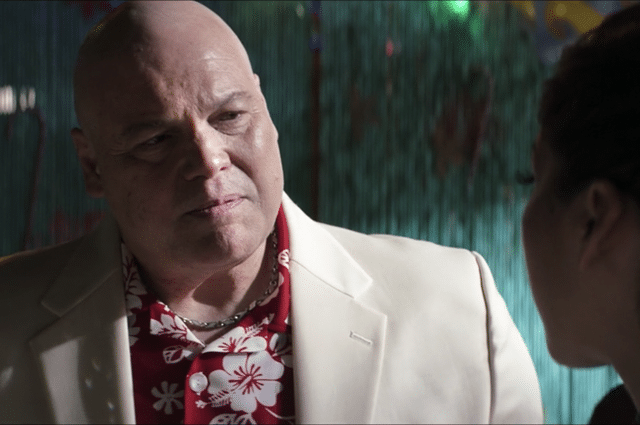 As much as the preceding MCU-set Disney+ shows were often big, spectacular and flashy, Hawkeye ends up succeeding for the opposite reason. Even while unfolding on a smaller scale, this show is an easy contender for the MCU’s best Disney+ offering so far, something that surprised even me! Even so, Hawkeye is a superb reminder that the most enduring legacy behind the MCU’s heroes is their humanity, a reminder that works more consistently here than it did in the sometimes-preachy The Falcon and the Winter Soldier. Sadly though, despite that success, it doesn’t appear that Hawkeye will be getting a second season at this point, particularly with the show being billed as a miniseries for now. Perhaps the upcoming Echo series is meant to serve as Hawkeye’s second season instead, or at least a surrogate of sorts.

As initially disappointing as it feels to not know of any current plans to continue this show’s story however, that anxiousness is also a testament to the fact that Hawkeye finally solidifies why its titular Avenger was deceptively awesome all along. Clint Barton may not have gotten his own blockbuster movie, unlike his Avengers comrades, but he also had the most to lose when the Chitauri came knocking, and stepped up anyway. It’s enough to make you feel legitimately guilty about all the jokes you probably made at Clint’s expense since 2012 (let’s face it, we all declared him the ‘worst Avenger’ at least once), but even in a post-Avengers world, Clint has found a new lease on life through Kate Bishop, proving that he was always an integral hero to the MCU, exactly because he never wished to be.