NOTE: Full spoilers for this episode of, “Peacemaker” are present in this review

As Peacemaker approaches the halfway point of its eight-episode debut season, following its three-episode premiere from the previous week, the show appears to have hit a minor, but noticeable speed bump. “The Choad Less Traveled” is an episode that’s largely designed to finish filling in any character blanks among the lead ensemble, while also exploring how each of them separately process the Butterfly threat that they’re now up against. This unfortunately means a whole lot of character exposition without as much humour or action to go with it, both being arguably the main draws of this DCEU spin-off series, but we do still get some interesting twists that tease more engaging events to come.

The formal addition of Adrian Chase/Vigilante to Chris’ team is also cemented in this episode, with Murn in particular being resigned to needing a psychopath in order to combat the Butterfly invasion. Adrian predictably remains a major comedic standout in this episode to boot, single-handedly shouldering virtually all of the humour in this case, as he awkwardly tries to find his place among the team. The best joke on this note comes from Adrian making a pitiful effort to hide his secret identity from Waller’s agents, all of whom quickly piece together who he is, particularly after his rather comical pinky toe injury from the previous episode.

Even after some of their experiences working together however, the team remains questionably competent in many respects, something that feels like it should be a bit funnier than it is in this case. Adebayo for example not-so-subtly convinces Adrian to get himself thrown in prison so that he can assassinate Chris’ father, as she’s concerned that Chris can never be happy while his father is alive. This is actually one of the better plot elements in this episode, eventually leading up to a surprisingly melancholy final scene for Chris, as he gets high and reminisces about his dead brother, whom Auggie apparently loved much more than him. Clearly, there’s a tragic twist brewing beneath the surface of the Smith family, one that goes beyond Auggie forcing Chris to become a trained killer.

Two other big screw-ups on this note contribute what little action we get in this episode, though one of these moments works better than the other. Adrian’s brief trip to prison is an absolute laugh riot at least, even if it’s also frustratingly short-lived. Adrian provoking Auggie’s people into attacking him with downright hilarious redneck insults, only to accidentally let slip that he knows Chris afterward, is not only funny in the moment, but later helps to give Adrian a welcome slice of humanity once Harcourt springs him. Like Chris, Adrian is mentally unsound and socially awkward, but he’s still trying to be a hero in his own way, and that helps keep his character from simply being a one-note, gag-oriented killing machine. 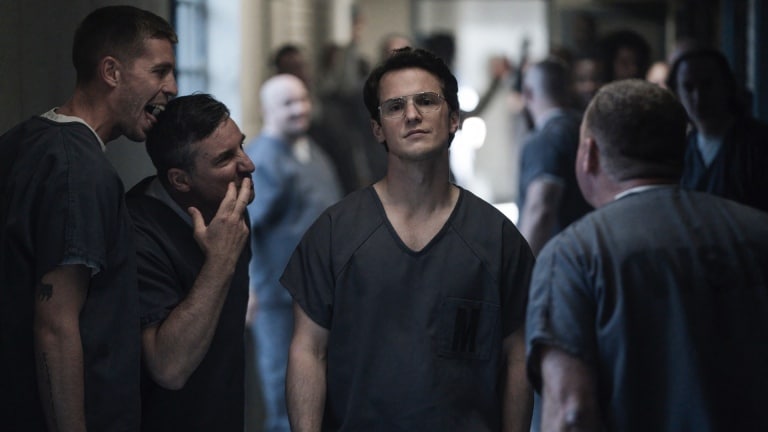 Disappointingly though, this episode being almost entirely comprised of the team arguing and getting nowhere can be a bit frustrating, especially when Peacemaker’s latest story turns mostly end up going in a circle here. Chief among these is Economos failing to properly secure the injured Judomaster, who eventually escapes his restraints, and nearly gets away. Chris and Judomaster later have a brief fight as well, at which point, Judomaster hints that the Butterflies may not be what they appear to be. Before Judomaster can finish his explanation however, he’s shot by Adebayo, though thankfully survives the bullet. This could be another interesting twist, with the normally violence-averse Adebayo suddenly becoming very concerned about silencing Judomaster, no doubt on the orders of her mother. It’s just annoying that this interesting development places Judomaster right back where he started in the end, and doesn’t appear to advance any character development beyond what we’ve already seen.

Fortunately, there is one very rewarding final twist to end this episode on, after Chris experiences a drug trip with Eagly and his new captive Butterfly. After Adebayo finds evidence linking Chris’ dead hook-up, Annie Sturphausen with evidence found from the Goff house, Murn tells her that they’ll investigate later, before it’s revealed that Murn is a Butterfly himself! Does this mean that a traitor is lurking among the team?! Well, personally, I don’t think it’s that simple. Judomaster did hint that the Butterflies may not be what they appear to be, after all. They’re certainly antagonists and threats at this point, but are they truly the bad guys? Perhaps there’s some other shady reason behind why Amanda Waller wants the Butterflies eradicated, and why she seems intent on using and disposing of Chris, and possibly her own daughter, in order to make that happen.

“The Choad Less Traveled” is a bit of an awkward middle chapter for Peacemaker. The show apparently had to spend an entire episode getting its lead characters fully up to speed, and developing them to the extent that they’ll need in order to face the threats ahead. Still, it says a lot about the appeal of this show that even a lesser episode within it is still noticeably better than most of the competition at this point. As much as there’s a lot of circular dialogue and ultimately pointless conflicts here, Adrian Chase keeps the comedy afloat pretty much single-handedly, while just enough is done with the ongoing Butterfly investigation to keep that interesting as well. Murn secretly being a Butterfly is a particularly exciting new development that could be dangerous, or fortunate, depending on what the Butterflies actually are, and what their true designs for the world may be. True to form, anything connected to Amanda Waller has a habit of becoming morally confused very quickly, a fact that’s enough to make you wonder if, for all of Chris’ heroic aspirations, he’s still just a patsy for another puppetmaster.